This idea is beautifully illustrated by the research efforts of a team of Australian scientists. Climate change has triggered the excessive melting of ice and snow in western Greenland. This loss of snow and ice concerns many people, but, on the other hand, it has been a boon for the scientific community. It has exposed a new outcropping of rocks, giving geologists first-time access to a rare window of the earth’s distant past. As it turns out, these rocks harbor what appears to be the oldest fossils on Earth—stromatolites that date to around 3.7 billion years in age.1 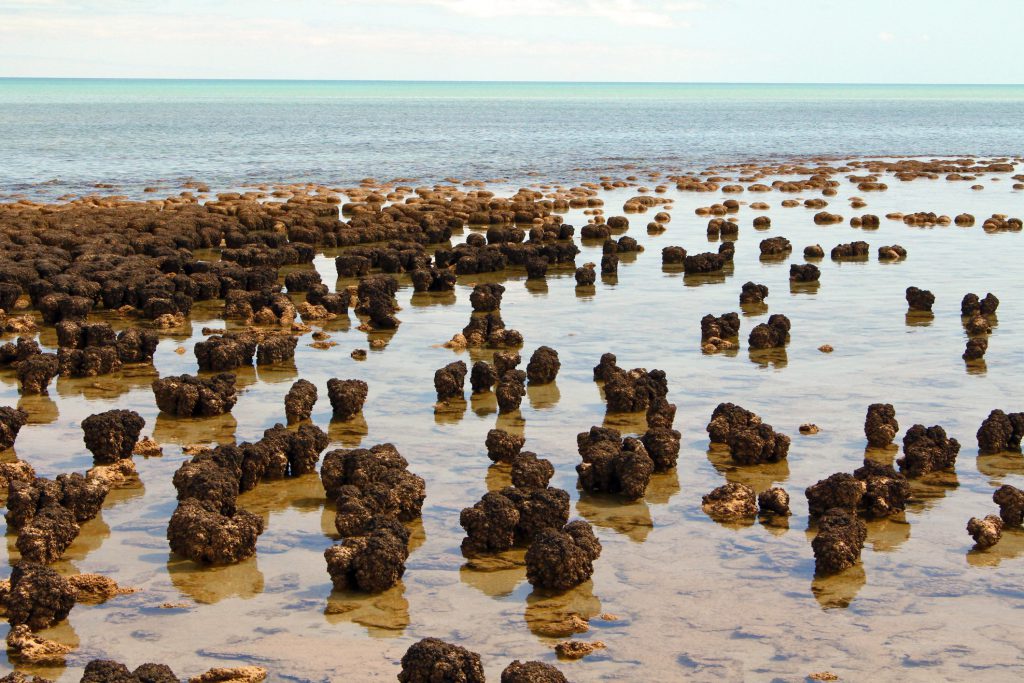 This latest insight has important implications for understanding the origin of life. In fact, on the day researchers from Australia reported this discovery in scientific literature, it made headlines in news outlets around the world.2

Evidence for Early Life on Earth

As Hugh Ross and I discuss in Origins of Life, geochemists have unearthed a number of chemical markers in the Isua Supracrustal Belt (ISB) of western Greenland that strongly hint at microbial life on Earth between 3.7 and 3.8 billion years ago. But origin-of-life researchers debate the bio-authenticity of these geochemical signatures, because a number of potential abiotic processes can produce similar geochemical profiles.

Most scientists doubted that fossils would ever be unearthed in the Isua rock formations because these outcrops have undergone extensive metamorphosis, experiencing high temperatures and pressures—conditions that would destroy fossils. But these newly exposed formations contain regions that have experienced only limited metamorphosis, making it possible for fossils to survive.

Careful microscopic and chemical characterization of the Isua stromatolites affirms their biogenecity. These analyses also indicate that they formed in shallow water marine environments.

These recently discovered stromatolites (and the previously detected geochemical life signatures in the Isua formations) indicate that a complex and diverse ecology of microorganisms existed on Earth as far back as 3.7 billion years ago.

Prior to the discovery of 3.7 billion-year-old stromatolites, origin-of-life researchers widely agreed that microbial life existed on Earth around 3.4–3.5 billion years ago, based on the recovery of stromatolites, microbial mats, microfossils, and geochemical signatures in rock formations found in western Australia. Many origin-of-life researchers have expressed amazement that complex microbial ecologies were present on Earth as early as 3.4 billion years ago. For example, paleontologist J. William Schopf marveled:

“No one had foreseen that the beginning of life occurred so astonishingly early.”3

The researchers who recovered and analyzed the Isua stromatolites expressed similar surprise:

“The complexity and setting of the Isua stromatolites points to sophistication in life systems at 3,700 million years ago, similar to that displayed by 3,480–3,400 million-year-old Pilbara stromatolites.”4

From a naturalistic perspective, the only way for these researchers to make sense of this discovery is to conclude that life must have originated prior to 4 billion years ago. They state: “This implies that by ~3,700 million years ago life already had a considerable prehistory, and supports model organism chronology that life arose during the Hadean (>4,000 million years ago).”5

However, the researchers’ explanation for the appearance of a complex, diverse microbial ecosystem at 3.7 billion years ago is problematic, when the natural history of early Earth is considered.

Traditionally, planetary scientists have viewed the early Earth as hot and molten, from the time of its formation (4.5 billion years ago) until ~3.8 billion years ago. This era of Earth’s history is called the Hadean. Accordingly, oceans were not present on early Earth until around 3.8 billion years ago. They believe a number of factors contributed to the hellish environment of our early planet, chief of which were the large impactors striking the earth’s surface. Some of these impact events would have been so energetic that they would have volatilized any liquid water on the planet’s surface and rendered the surface and subsurface as a molten state. In light of this scenario, it would be impossible for life to originate much earlier than 3.8 billion years ago. To put it another way, if the traditional understanding of early Earth history is correct, then it looks as if complex microbial ecologies appeared on Earth suddenly—within a geological instant. It is impossible to fathom how the explosive appearance of early life could happen via evolutionary mechanisms.

More recently, a number of planetary scientists have proposed that early Earth only remained molten for the first 200–300 million years of its history. After which time, oceans became permanent (or maybe semi-permanent) features on the planet’s surface. The basis for this view has been the discovery of zircon crystals that date between 4.2–4.4 billion years ago. Geochemical signatures within these crystals are consistent with their formation in an aqueous setting, implying that oceans were present on Earth prior to 3.8 billion years ago.

But this revised scenario doesn’t help the evolutionary approach to life’s origin. Around 3.8 billion years ago, a gravitational perturbation in the early solar system sent asteroids towards Earth. Some estimates have the earth experiencing over 17,000 impact events during this time. This event, called the late heavy bombardment (LHB), was originally regarded as a sterilization event. If so, then any life present on Earth prior to the LHB would have been obliterated. That being the case, again, it appears as if complex microbial ecologies appeared on Earth suddenly, within a geological instant.

Recently, some planetary scientists have challenged the notion that the LHB was a sterilization event. They argue that life on the planet’s surface would have been destroyed, but life in some environments, such as hydrothermal vents, could have survived. In other words, there would have been refugiums on Earth that served as “safe houses” for life, ushering it through the LHB.

Yet the latest discovery by the Australian scientists doesn’t fit this scenario. The Isua stromatolites formed at the earth’s surface in a shallow water environment. In fact, the research team generated data that effectively ruled out stromatolite formation near hydrothermal vents. But if the refugium model has validity, the Isua fossils should have formed in a high-temperature milieu.

Finally, pushing life’s origin back to more than 4 billion years ago doesn’t solve the problem of a sudden origin-of-life—it merely displaces it to another window of time in Earth’s history. Origin-of-life researchers have geochemical evidence suggesting that life was present on Earth between 4.2–4.4 billion years ago. Given that the earth was molten for the first 200–300 million years of its existence (minimally), that doesn’t leave much time for life to originate.

No matter the scenario, a naturalistic, evolutionary approach to the origin-of-life can’t seem to accommodate the sudden appearance of life on Earth. On the other hand, if a Creator brought life into being, this is precisely the mode and tempo expected for life’s appearance on Earth.

While the discovery of 3.7 billion-year-old stromatolites confounds evolutionary explanations for life’s origins, it affirms RTB’s origin-of-life model. This model is derived from the biblical creation accounts and make two key and germane predictions: (1) life should appear on Earth soon after the planet’s formation; and (2) first life should possess intrinsic complexity. And both of these predictions are satisfied by this latest advance.

Where is everybody? This common query represents the bewilderment of decades of futility in the search for extraterrestrial intelligent life (ETI). Part of the...
Origin of Life & Astrobiology

What Does It Take to Kill a Scientific Model?

In his first letter to the Thessalonians, Paul writes,1 Test everything; hold fast to what is good. Paul does not say, and nowhere in his epistles...
Chemistry

Through the Glass Darkly

My teenage daughters spend a lot of time in front of the mirror. For my girls, life without a mirror is unimaginable.
Chemistry