“Few concepts have been embraced by popular science as enthusiastically as the idea that reactive oxygen species (ROS) are harmful and that their levels should be controlled by including antioxidants in the diet or as supplements.”1

Antioxidants are the latest diet fad. Many people do whatever they can to include foods high in antioxidants in their diets. Some people even go a step further by taking antioxidant supplements. All these actions are meant to combat the harmful effects of reactive oxygen species (ROS). Produced in the mitochondria, these highly reactive chemical derivatives of molecular oxygen will destroy cellular components if left unchecked.

Yet things aren’t always what they seem. An increasing number of studies indicate that taking dietary supplements of antioxidants has questionable health benefits.2 In fact, taking certain antioxidant supplements may be harmful. For example, studies indicate that people who supplement their diets with vitamin E and beta-carotene have higher mortality rates compared to people who don’t take antioxidant supplements at all. Other studies demonstrate that instead of slowing cancer’s spread, antioxidants, in fact, accelerate the progression of certain cancers. Antioxidant consumption also impacts development, harming certain types of stem cells.

When it comes to antioxidants and ROS, the scientific community has made another surprising about-face. Biochemists no longer view ROS as harmful compounds, wreaking havoc on the cell’s components. Instead, they have learned that ROS play a key role in cell-signaling processes. As it turns out, consumption of excessive antioxidants interferes with ROS-based signaling pathways. And this interference explains why consuming inordinate levels of antioxidants aren’t part of a healthy lifestyle.

The surprising implications of this new insight regarding antioxidants and ROS extend beyond dietary considerations. This new understanding has bearing on the creation vs. evolution debate by providing a response to a common objection skeptics level against intelligent design arguments.

ROS Generation and the Case for Evolution

ROS are primarily produced in the mitochondria by the electron transport chain (ETC). The ETC harvests energy needed to carry out the various biochemical operations that take place within the cell. For the most part, the ETC is comprised of a series of protein complexes, conceptually organized into a linear array. The first complex of the ETC receives chemically energetic electrons (ultimately, derived from the breakdown of biochemical fuels) and passes them along to the next complex in the ETC. Eventually, these electrons are handed off from complex to complex, until they reach the terminal part of the ETC. When shuttled from one complex to the other, the electrons give up some of their energy. This released energy is captured, and ultimately used to produce compounds such as ATP, which serve as energy currency inside the cell. 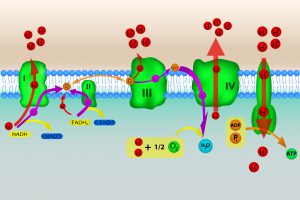 One of the final steps carried out by the ETC is the conversion of molecular oxygen into water, with oxygen receiving the de-energized electrons. If the energy status of the cell is high, the movement of electrons through the ETC slows down, and, under some circumstances, becomes backed up. When this jam occurs, the electrons prematurely react with oxygen because they must go somewhere. (This usually happens between complex I and complex III). When this premature termination takes place, ROS (which include the superoxide ion, the hydroxyl free radical, and hydrogen peroxide) form instead of water.

At face value, it appears as if ROS form as an unintended side reaction. Traditionally, biochemists regard ROS as deadly compounds that oxidize membrane components, DNA, and proteins, causing untold damage to the cell.

For many skeptics, the apparently random, unwanted generation of ROS which terrorize the cell undermines the case for intelligent design and serves as evidence for an evolutionary origin of biochemical systems. Why? Because the seemingly unintended production of chemically destructive ROS has all the markings of a flawed system—the type of system unguided evolutionary processes would produce, not the type of design befitting a Creator.

The Cellular Roles of ROS

Yet in recent years, biochemists have come to see ROS differently. Instead of the product of an unwanted side reaction, biochemists have come to discover that these compounds serve as second messengers, communicating the cell’s energy status to key metabolic processes, including those that regulate stem cell development.3 These mechanisms allow the cell to coordinate various metabolic processes for the available bioenergetics sources.

Because hydrogen peroxide has the chemical stability and capacity to dissolve through membranes, biochemists believe that it functions as the primary second messenger. Still, the other ROS do play a role in cell signaling.

ROS can serve as second messengers because they preferentially oxidize certain amino acids in proteins, with cysteine residues often targeted. The selective oxidation of amino acid residues modifies the activity of the protein targets. Targeted proteins include transcription factors (which control gene expression), and kinases and phosphatases (which regulate different stages of the cell cycle). These protein targets explain why ROS play a critical role in stem cell renewal, stem cell proliferation, and maturation.

Oxidative Damage by ROS Is a Trade-Off

Of course, the drawback to using ROS as second messengers is the oxidative damage these materials cause. But instead of viewing the damaging effects of these compounds as a flawed design, I maintain that it is better to think of it as a trade-off.

Towards that end, it is important to note that the cell has an extensive and elaborate system to buffer against the harmful effects of ROS. For example, superoxide dismutase converts superoxide into hydrogen peroxide. Two other enzymes, catalase and peroxiredoxin, transform hydrogen peroxide into water. In fact, one of the targets of ROS are transcription factors that trigger the production of proteins that are part of the cell’s antioxidant defenses and proteins that take part in pathways that clear damaged proteins from the cell. This ingenious design ensures that once ROS form and play a role as second messengers, the damaged proteins are quickly destroyed and any destruction they cause is mitigated.

It is truly remarkable how dramatically the scientific community’s views on ROS (and antioxidants) have changed in recent years. Instead of being the unwanted byproducts of metabolism that plagued the cell, ROS serve as a biochemical fuel gage, triggering processes such as quiescence and even autophagy (programmed cell death) when the energy balance is too low and the cell is experiencing starvation and cell differentiation (which impacts stem cell biology) when energy stores are sufficiently full.

Often, skeptics point to so-called bad designs as evidence for an evolutionary history for life. But, the changed perspective of ROS serves as a cautionary tale. Many times, what is perceived as a bad design turns out to be anything but as we learn more about the system, and these discoveries undermine the best arguments for evolution while adding to the mounting case for intelligent design.

Bacteria Organized by Design, Part 2 (of 2)

Admittedly, I am a geek, but strolling up and down the library aisles, surrounded by rows of bound journals, was a borderline religious experience...
Biochemistry

Do Scientists Accept the Results of the ENCODE Project?

In the fall of 2012, the ENCODE Project reported that at least 80 percent of the human genome consists of functional sequences. A number...
Biochemistry