I expected to get a reaction—and I did.

Last week I posted the below ‘meme’ on my Facebook page and Twitter account, claiming that the evolutionary paradigm is unfalsifiable because of the stranglehold that methodological naturalism has on the operation of science. 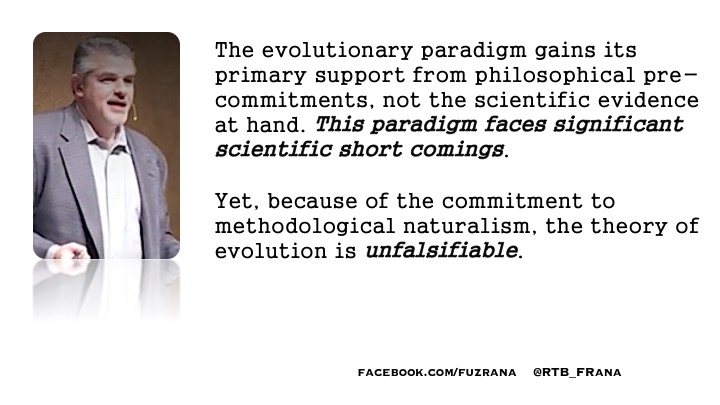 And of course, it elicited a rather negative reaction by at least one atheist who listed a number of ways to falsify biological evolution, delineated by evolutionary biologist Jerry Coyne.

My response: In principle, chemical and biological evolution are falsifiable, as are all scientific theories. But in reality, the evolutionary paradigm is unfalsifiable—because of the influence of methodological naturalism.

In effect, methodological naturalism restricts the available explanations for the universe and phenomena within the universe such as the origin and history of life. Certain explanations are off the table, a priori. As a consequence, intelligent design/creationism cannot be part of the construct of science.

The Effect of Methodological Naturalism on Scientific Inquiry

In contradistinction to philosophical naturalism, methodological naturalism claims to be metaphysically neutral on the question of God’s existence. According to the tenets of methodological naturalism, when one engages in the scientific enterprise it is necessary to suspend belief in God, regardless of one’s personal convictions. The only allowed explanations for the universe and phenomena within the universe are natural process, mechanistic explanations. One cannot appeal to the supernatural. But that doesn’t mean the supernatural doesn’t exist. Simply put, the supernatural is not given a place in the scientific project.

In effect, methodological naturalism restricts the available explanations for the universe and phenomena within the universe such as the origin and history of life. Certain explanations are off the table, a priori. As a consequence, intelligent design/creationism cannot be part of the construct of science. Any explanation that states an intelligent agent is responsible for, say, the origin of life, is prohibited. As a result, chemical and biological evolution are the only available alternatives for someone who’s trying to scientifically account for the origin and history of life.

The net effect is this: Chemical and biological evolution are true by default, regardless of the evidence at hand. No matter how much evidence exists challenging the evolutionary paradigm, it cannot be supplanted because there is no other alternative explanation that is allowed.

A Failed Prediction for the Evolutionary Paradigm

As it turns out, discordant phylogenies plague evolutionary biologists. On this basis alone, one could conclude that the evolutionary paradigm has been falsified.

As an illustration of this point, consider one of the ways that Jerry Coyne thinks biological evolution can be falsified:

“Complete discordance between phylogenies based on morphology/fossils and on DNA. While individual genes can show discordance by lateral transfer—rotifers, for example, have incorporated into their genome from DNA from very unrelated organisms, and this is also common for bacteria. But lateral transfer of genes, as opposed to their direct descent from parent to offspring, is relatively uncommon. So, for example, if we sequenced the genome of a blue whale and found that on the whole the species was more closely related to fish than to mammals, we’d have a serious problem for the theory of evolution.”

Coyne’s prediction is similar to one made by the late evolutionary biologist Morris Goodman. According to Goodman, one of the founders of the discipline of molecular anthropology:

“If the biblical account of creation were true, then independent features of morphology, proteins, and DNA sequences would not be expected to be congruent with each other. Chaotic patterns, with different proteins and different DNA sequences failing to indicate any consistent set of species relationships, would contradict the theory of evolution.”1

As it turns out, discordant phylogenies plague evolutionary biologists. It is not uncommon for evolutionary trees built from morphological features to disagree with evolutionary trees built from DNA sequence data. Again, it is not uncommon for molecular phylogenies to disagree with one another when constructed using different regions of the genome. (For examples, see the articles listed below under Resources.) On this basis alone, one could conclude that the evolutionary paradigm has been falsified—or at minimum one would be justified to express skepticism about the capacity of the evolutionary paradigm to account for the origin, history, and design of life.

How do evolutionary biologists respond to the pervasive problem of discordant phylogenies?

Why the circular reasoning? Because if one adheres to methodological naturalism, the only valid scientific explanation for the origin and history of life is through some type of evolutionary process. Evolution must be true by default. Why? Because if the evolutionary paradigm is falsified, then the only other alternative is intelligent design/creationism. And this approach to biology is prohibited, a priori, because of philosophical commitments to a materialistic approach to the life sciences. This state of affairs can only lead to tautologies when failed predictions arise, though the tautologies are draped in scientific jargon.

So, is biological evolution falsifiable? Yes, in principle. But no, in reality.

I suspect that when evolutionary biologists list “if-they-are-true” observations that would disprove biological evolution, it doesn’t mean they are necessarily willing to consider another paradigm. Because if they were, they would readily see the evolutionary paradigm’s many shortcomings.

Genetics Discovery in Snakes Adds Legs to the Case for Creation

The serpent caused Adam and Eve a lot of problems in the Garden of Eden. Snakes continue to create difficulties today, especially for creationists...
Evolution

In Genesis 1 God commanded the human race through Adam and Eve to use and care for Earth’s resources for the benefit of themselves...
Biology