“Many of the experiments designed to explain one or other step in the origin of life are either of tenuous relevance to any believable prebiotic setting or involve an experimental rig in which the hand of the researcher becomes for all intents and purposes the hand of God.”

If you could time travel, would you? Would you travel to the past or the future?

If asked this question, I bet many origin-of-life researchers would want to travel to the time in Earth’s history when life originated. Given the many scientifically impenetrable mysteries surrounding life’s genesis, I am certain many of the scientists working on these problems would love to see firsthand how life got its start.

It is true, origin-of-life researchers have some access to the origin-of-life process through the fossil and geochemical records of the oldest rock formations on Earth—yet this evidence only affords them a glimpse through the glass, dimly.

Because of these limitations, origin-of-life researchers have to carry out most of their work in laboratory settings, where they try to replicate the myriad steps they think contributed to the origin-of-life process. Pioneered by the late Stanley Miller in the early 1950s, this approach—dubbed prebiotic chemistry—has become a scientific subdiscipline in its own right.

In effect, the goals of prebiotic chemistry are threefold.

Without question, over the last 6 to 7 decades, origin-of-life researchers have been wildly successful with respect to the first two objectives. It is safe to say that origin-of-life investigators have demonstrated that—in principle—the chemical and physical processes needed to generate life through chemical evolutionary pathways exist.

But when it comes to the third objective, origin-of-life researchers have experienced frustration—and, arguably, failure.

In an ideal world, humans would not intervene at all in any prebiotic study. But this ideal isn’t possible. Researchers involve themselves in the experimental design out of necessity, but also to ensure that the results of the study are reproducible and interpretable. If researchers don’t set up the experimental apparatus, adjust the starting conditions, add the appropriate reactants, and analyze the product, then by definition the experiment would never happen. Utilizing carefully controlled conditions and chemically pure reagents is necessary for reproducibility and to make sense of the results. In fact, this level of control is essential for proof-of-principle and mechanistic prebiotic studies—and perfectly acceptable.

However, when it comes to prebiotic chemistry’s third goal, geochemical relevance, the highly controlled conditions of the laboratory become a liability. Here researcher intervention becomes potentially unwarranted. It goes without saying that the conditions of early Earth were uncontrolled and chemically and physically complex. Chemically pristine and physically controlled conditions didn’t exist. And, of course, origin-of-life researchers weren’t present to oversee the processes and guide them to their desired end. Yet, it is rare for prebiotic simulation studies to fully take the actual conditions of early Earth into account in the experimental design. It is rarer for origin-of-life investigators to acknowledge this limitation. 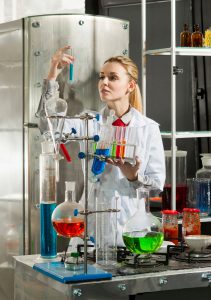 This complication means that many prebiotic studies designed to simulate processes on early Earth seldom accomplish anything of the sort due to excessive researcher intervention. Yet, it isn’t always clear when examining an experimental design if researcher involvement is legitimate or unwarranted.

As I point out in my book Creating Life in the Lab (Baker, 2011), one main reason for the lack of progress relates to the researcher’s role in the experimental design—a role not often recognized when experimental results are reported. Origin-of-life investigator Clemens Richert from the University of Stuttgart in Germany now acknowledges this very concern in a recent comment piece published by Nature Communications.1

As Richert points out, the role of researcher intervention and a clear assessment of geochemical relevance is rarely acknowledged or properly explored in prebiotic simulation studies. To remedy this problem, Richert calls for origin-of-life investigators to do three things when they report the results of prebiotic studies.

Yet, Richert’s commentary represents an important first step toward encouraging more realistic prebiotic simulation studies and a more cautious approach to interpreting the results of these studies. Hopefully, it will also lead to a more circumspect assessment on the importance of these types of studies for accounting for the various steps in the origin-of-life process.

Researcher Intervention and the Hand of God

One concern not addressed by Richert in his commentary piece is the fastidiousness of many of the physicochemical transformations origin-of-life researchers deem central to chemical evolution. As I discuss in Creating Life in the Lab, mechanistic studies indicate that these processes are often dependent upon exacting conditions in the laboratory. To put it another way, these processes only take place—even under the most ideal laboratory conditions—because of human intervention. As a corollary, these processes would be unproductive on early Earth. They often require chemically pristine conditions, unrealistically high concentrations of reactants, carefully controlled order of additions, carefully regulated temperature, pH, salinity levels, etc.

As Richert states, “It’s not easy to see what replaced the flasks, pipettes, and stir bars of a chemistry lab during prebiotic evolution, let alone the hands of the chemist who performed the manipulations. (And yes, most of us are not comfortable with the idea of divine intervention.)”2

Sadly, since I made the point about researcher intervention nearly a decade ago, it has often been ignored, dismissed, and even ridiculed by many in the scientific community—simply because I have the temerity to think that a Creator brought life into existence.

I would argue that this conclusion follows from nearly seven decades of work in prebiotic chemistry and the consistent demonstration of the central role that origin-of-life researchers play in the success of prebiotic simulation studies. It is becoming increasingly evident for whoever will “see” that the hand of the researcher serves as the analog for the hand of God.

It never ceases to amaze me what turns up when I clean out our garage: forgotten stuff that brings back memories, and occasionally, old...
Chemistry

Enthusiasm and hope for a possible Martian origin of life have suffered a major scientific setback.
Chemistry

Phosphorus No Help for Chemical Evolution

In their attempts to support a naturalistic origin-of-life scenario, these researchers have demonstrated the critical role an intelligent agency must play in life's genesis...
Chemistry