Last week presented me with a challenge: teach creation to a group of children at a church that defaults to the 24-hour view—my church. 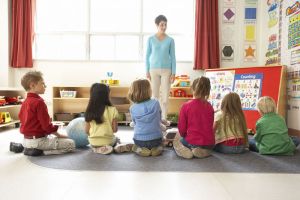 Two years ago I had faced the same situation. It would not, I reasoned, be respectful to teach an old-earth view not sanctioned by the church leadership or by my students’ parents—but neither could I espouse a view of creation that I sincerely believe is erroneous. So I requested to be excused from teaching that particular lesson.

This time around, the woman in charge of the elementary division of children’s ministry, knowing my position, encouraged me to take a look at the curriculum before I decided against teaching on the Sunday assigned to the creation lesson. To my surprise the curriculum mentioned nothing about the creation days. Rather, it focused on two points: (1) God is the Creator, and (2) he created humans in his image. Now here were two concepts I could whole-heartedly support and teach!

It dawned on me that these ideas represented common ground with the 24-hour perspective. Usually, it’s much easier to focus on the differences between the young-earth and old-earth views instead of finding the similarities. Although never one to shy away from a healthy debate, RTB philosopher/theologian Kenneth Samples recommends this strategy when talking to people with opposing views:

When I speak with Christians of other theological flavors I try to find common ground with them. I often talk about what C. S. Lewis called “mere Christianity.”…Additionally, I focus on the person of Jesus Christ—emphasizing his life, death, and resurrection.

Before I will discuss controversial doctrinal differences, I insist on beginning with the doctrinal common ground that I share with other believers.

This got me thinking that perhaps I should apply this advice to other areas of difference or disagreement, whether it’s church style or political position. For example, the church I attend is very different in style from the hipster churches Sandra described last week, but both churches support and value ministries that care for the poor.

Additionally, the Sunday school curriculum helped me refocus on the vital point of the biblical creation narrative: God is the Creator. In the midst of arguments over 24-hour vs. long days, global vs. local flood, and so on, it’s so easy to lose sight of the Bible’s main creation message.

In his book A Matter of Days, RTB founder Hugh Ross notes:

Twenty-one different creation accounts within Scripture…emphasize most strongly the who of creation. To a significant degree, they explain the how of creation. And to a much lesser degree, they discuss the when of creation. In other words, the Bible itself places far more importance on the factual nature of the creation events than on the length of the Genesis 1 creation days. (Emphasis original)

Encouraged, I agreed to teach the creation lesson. The challenge then became illustrating the concept of imago Dei to a bunch of wriggly fourth-graders. Suffice to say, the lesson was a success, both for my students and for me.

Resources: For an educational yet entertaining tour of the different creation perspectives, check out RTB’s docudrama, Dual Revelation.

Augustine of Hippo (AD 354–430) was a gifted rhetorician and after teaching in his hometown of Thagaste for some time, he opened a school...
Theology

Prior to founding Reasons To Believe, one of my roles as a pastor was to train teams of volunteers to go door-to-door with the...
Theology

If you’re like me, you appreciate learning about and living by the wisdom of others. Many Christians, past and present, serve as examples for...
People