It was supposed to be a five minute trip to Home Depot. Instead I spent the better part of an hour with a garden specialist discussing mulch, composting, and paganism. Wait, paganism? 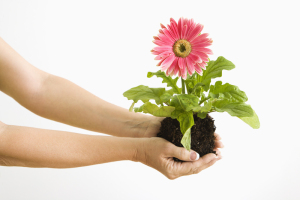 I joked about how the Gerbera plant my best friend had given me must be magic since it is the only green thing I haven’t killed. The clerk was quick to respond, asking if I too were pagan. “Eh, no,” was all I could muster before he began eagerly sharing his beliefs: “As a pagan, I believe we’re all one with nature and animals.”

Unfortunately my response was as slow as my wit, and I’m sorry to say I didn’t do much more than pay for my purchases and wish him well. Still, his comment got me thinking (on the way home, of course): How are we, as Christians, to connect with and care for nature and animals?

Some express concern that there’s too fine a line between caring for and worshiping the environment. Others, both inside and outside the faith, might question whether the expectation of a new creation persuades believers to be a little lax with how we treat the current creation. And, of course, there are those who would bite their un-green thumb at global warming, claiming pundits exaggerate and distort the data to push an agenda.

Maintaining a balanced approach to environmental or “creation care” issues can seem as difficult as maintaining balanced pH levels for garden soil.

Environmental scientist Calvin DeWitt offers his perspective in several of his books, including Earth-Wise (2007).

If we learn to seek godly contentment as our great gain, we will take and shape less of God’s earth. We will demand less from the land. We will leave room for God’s other creatures. We will be responsible stewards, caretakers, and keepers of creation.

In the forthcoming book Hidden Treasures in the Book of Job, astronomer Hugh Ross offers a fresh viewpoint to the Bible’s oldest book.

First, Hugh acknowledges that global warming has been confirmed and that human activity is a contributing factor. That might seem grim, but he doesn’t end there. He suggests that the book of Job “offers the best prescription for maintaining global climatic stability.”

Hugh lists precipitation (Job 38), ostriches (Job 39), and whales (Job 7, 12) as examples of how Job offers solutions to today’s climate issues. And he adds that Job’s successful anticipation and prediction of this century’s biggest questions and controversies implies that it and all of Scripture were divinely inspired.

Hidden Treasures in the Book of Job, which presently sits on my desk waiting for indexing, is expected to release October 2011. In the meantime, check out these resources on global warming:

“What about Global Warming?” by Jeff Zweerink

“Toward a Sensible Approach to Global Warming—Interview with Kevin Birdwell”

As for my pagan friend, my hope is that we’ll cross paths again and that I’ll be able to share with him how we are, indeed, connected to nature and animals.

Still can’t wait until October for the Hidden Treasures in the Book of Job book release? Then consider hopping aboard RTB’s cruise conference, July 30–August 6. The theme aboard the summer Alaska Cruise Conference is Future Faith Challenges and will include a breakout session on (you guessed it) “Hidden Treasures in Job.” See a full list of main lectures and breakout sessions here. Don’t miss the boat!

In today's society, we often look to science as an unbiased source of truth, regulated by the peer review process. Unfortunately, the phenomenon of...
Worldviews

Some people think the advance of science continues to remove any reason for believing in God, but in reality scientific discovery over the last...
Worldviews

Does Nature Today Reveal More or Less about God? Part 1