Last week’s Take Two discussed “A Match Made in Heaven”—the happy union of apologetics and evangelism. This week, I dare to suggest another happy union: Cowboys & Aliens. Classic Western and sci-fi. (Check out the trailer here.) 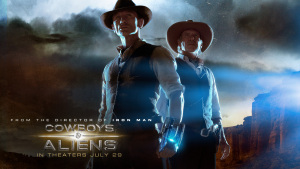 In just seven long-but-finite days, James Bond (Daniel Craig) and Han “Indy” Solo (Harrison Ford)—that’s how I choose to see ‘em at least—face off against a pack of extraterrestrial invaders. Commence “epic showdown for survival.”

Though the premise is clear to the moviegoer, the film’s characters aren’t sure what they’re fighting. Director Jon Favreau notes, “In the 1800s, nobody knows what aliens are. They think they’re demons.”

What’s ironic is that here in the real world, back in good ol’ 2011, there’s still no consensus on what to think of UFO and alien phenomena. Some say there’s a natural explanation for it all. Others entertain the idea of physical beings taking a road trip to visit us humans. And others, still, suggest the beings are spiritual in nature. (See here for details on the three hypotheses.)

There’s no consensus from a theological perspective, either. In a recent interview on The Janet Meffred Show, coauthor of Lights in the Sky and Little Green Men Kenneth Samples explains that “the Bible doesn’t say anything explicit about life in other worlds. It doesn’t necessarily deny it. [The topic] is all very, very rich and speculative, but Christians go back and forth.”

So, Cowboys & Aliens might offer more than just big numbers at the box office. It could cause viewers to think about the possibility of real-life aliens and how that idea fits within their particular worldviews. How does it fit within yours?

For RTB’s perspective on UFOs and aliens, check out:

I’ve read many books about the life and views Augustine of Hippo (AD 354–430)—my favorite theologian/philosopher and arguably the most influential Christian thinker outside...
Worldviews

3 Things You May Not Know about C. S. Lewis

C. S. Lewis may have been the most important Christian thinker of the twentieth century. His modern classic Mere Christianity was the first Christian...
Education

The Tricky Topic of Halloween

Many Christians raise questions and express concerns about holidays like Halloween that have some historical connection, at least in terms of dates, to pagan...
Theology