The weekend following Thanksgiving, my husband and I decked the halls of our apartment with wreaths, garland, and a Nativity scene. And next week, we’ll drag home a heavenly scented Douglas fir to decorate with lights and sparkling ornaments. Christmas is my favorite time of the year, as it is for many people. I love the food, songs, decorations—everything! The festive spirit of the season buoys my own spirit. 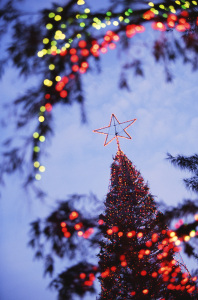 For some Christians, both individuals and whole denominations, Christmas can be a source of controversy. Objections to the holiday may spring from its origins. As with Easter and Halloween, some Christmas traditions grew from a mix of pagan and Christian elements. Church leaders instituted Christmas as an alternative to decadent winter festivals such as Saturnalia. Rather than stamping out pagan rituals entirely, various elements were adopted into the Christmas canon and given new, Christ-centered meanings. For example, Pope Gregory is recorded as having encouraged Bishop Augustine of Canterbury to adopt the local custom of decorating with evergreen boughs in winter.

So far, the anti-Christmas arguments I’ve read place a lot of emphasis on the pagan roots, but ignore or dismiss the ways the traditions have changed over the centuries. Putting up a fir tree and decorating it, for example, does not symbolize tree worship to the average person. In a discussion on this subject, RTB philosopher/theologian Kenneth Samples agreed that arguing against Christmas on the basis of pagan origins comes close to, if not actually committing, the genetic fallacy. This is an error in logic that focuses solely on a thing’s origin without giving any credence or thought to how that thing has changed over time.

There are, however, some objections to Christmas that I find reasonable and understandable. Like Charlie Brown, many believers struggle with balancing the sacred aspects of the holiday with the hyper-commercialization often centered on Santa Claus. And speaking of the jolly old elf, there’s also the conundrum of do you let your kids believe in Kris Kringle or not?

It’s a lot to sort through in between writing cards, baking cookies, and wrapping gifts. Personally, I think it should be for each family to determine how they commemorate this season, or abstain from it, and then respect the decisions of others. There’s no need to denounce someone’s Christmas tree as pagan or to shout “bah humbug!” at those who choose not to embrace certain elements (such as Santa Claus). Romans 14 serves as a great guide for navigating such disagreements between believers. Paul writes,

One person considers one day more sacred than another; another considers every day alike. Each of them should be fully convinced in their own mind. Whoever regards one day as special does so to the Lord. Whoever eats meat does so to the Lord, for they give thanks to God; and whoever abstains does so to the Lord and gives thanks to God. For none of us lives for ourselves alone, and none of us dies for ourselves alone. If we live, we live for the Lord; and if we die, we die for the Lord. So, whether we live or die, we belong to the Lord. For this very reason, Christ died and returned to life so that he might be the Lord of both the dead and the living.

For Halloween, Ken offers guidelines for Christians debating whether or not to celebrate. I think his advice can be readily applied to Christmas controversies. Here’s my Christmas spin on Ken’s holiday tips:

For myself, I take Charles Dickens’ view of Christmas time “as a good time; a kind, forgiving, charitable, pleasant time: the only time I know of, in the long calendar of the year, when men and women seem by one consent to open their shut-up hearts freely.” This is a season bursting with generosity, both the tangible kind and the intangible. It reminds me of the Source of all generosity who offers “peace on earth and goodwill to men” the whole year round.

Whatever festivities you and your family partake of this season, I hope yours is a very merry December.

Resources: Check out Ken’s motivation for celebrating Christmas in his article “Three Reasons Why I Love the Advent Season” (coming in podcast form on December 22).

A Movie to Make You Think: The Two Popes

The great Yale church historian Jaroslav Pelikan once called the Roman Catholic Church ʺthe most formidable religious institution in the history of America and...
Philosophy & Ethics

At the very heart of historic Christianity stands a cross. The Gospel message is that God brought forth redemption from sin through the crucifixion...
Theology

The Triune God Is Love

In traditional monotheism (classical Judaism, Islam, and Unitarianism), God is one being and one person. Or, philosophically, God is one What (essence) and one...
Theology