Call me a skeptic. A nonbeliever. Even a hater. But in a perfect world—a world that suits my preferences, I should say—it doesn’t exist.

What is “It,” you ask? The Star Wars prequels, of course. Last weekend the family and I cuddled up to have a Star Wars marathon. Naturally I had to tweet about it. And, much to the chagrin of a nameless fanboy, this marathon would consist of just three succinct and coherent films—the original trilogy (OT). I had denied the prequel’s very existence. (For those curious, my quick response is that the only notable thing to come from the prequels is Weird Al Yankovic’s The Saga Begins. My blogging cohort, Maureen, fervently agrees. Her take is that the prequels sacrifice story for special effects.) 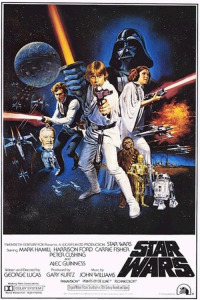 Still, despite my anti-prequelistic preference, everywhere I look—toy stores, hobby shops, the entrance to Frank & Son’s Collectible Show—evidence counter to my worldview of choice flaunts itself shamelessly and befuddles my perspective.

In the same vein, evidence for the just-rightness of our universe continues to strut its cosmic stuff, making it increasingly difficult to hold to a worldview that prefers naturalistic causes only. Whether it’s through podcasts, publications, books, or DVDs, there’s no shortage of resources that support a God-created universe.

RTB scholars remain committed to bringing this cutting-edge research to all science apologetics fan-boys and girls. One such resource, and RTB’s latest booklet, is the 10 Breakthroughs of 2010. (Apologist J. P. offers a review of this resource on his blog Logical Truth and NewsVine.com present their own take here.)

An article of interest is astrophysicist Jeff Zweerink’s “Other Planets: Plenty of Water, No Life.” Here he explains how astronomers have found evidence of liquid water having existed on numerous bodies, including Mars, Venus, and the Moon. Yet the existence of water doesn’t necessarily equate to the existence of life. (Unless you’re a Gungan on Naboo.)

On the contrary, the more scientists learn about the solar system’s history and elemental makeup, the more their hope of finding a life-hospitable planet like Earth is virtually obliterated, a la the Death Star to Alderaan.

Zweerink explains, “Many bodies in the solar system started with liquid water, yet 4.5 billion years later, only Earth maintains a stable, life-supporting water cycle. The results of these recent discoveries affirm the biblical idea that Earth is specifically designed for life.”

With a family trip to San Diego’s Comic-Con International just months away, it’s certain there will be plenty more disturbances in my worldview’s force. Likewise, the more scientists uncover about our universe, the more we can anticipate disturbances in naturalism’s force. Like it or not the evidence speaks for itself. Should you disagree, I find your lack of faith disturbing.

What’s your take on the Star Wars franchise? Original trilogy only or all six episodes? Leave a comment and you may win all five “episodes” of the 10 Breakthroughs booklets (2005-2010). We’ll select three winners at random. Happy commenting!

Just for fun – Fans of the entire Star Wars franchise, mark May 19 on your calendars. It’s Star Wars Prequel Appreciation Day. Aficionados in general might appreciate the Little Darth Vader commercial and this important PSA on How to Talk to Your Kids about Star Wars.

God as the Best Explanation of Beauty

Some of Western civilization’s greatest works of art are housed in the Vatican Museums. Museum benefactors say that part of their mission is to...
Worldviews

Voted the Best Christian Book of All Time

What is the best Christian book of all time? (Outside of the Bible, of course.) And how could something as grand as that claim...
Education

Students in a college ethics course I was teaching once asked me if I would like to be rich, famous, and influential. I replied,...
Worldviews