You may be familiar with my Facebook and Twitter pages, where I have a weekly segment called #ThursdayTheology. There I provide short, substantive quotes from important theological thinkers past and present. One of the most frequent sources is Alister McGrath. 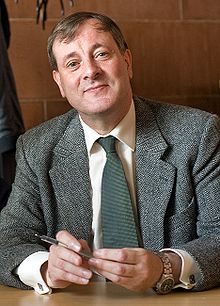 McGrath serves as professor of science and religion at Oxford University. He earned three doctorates from Oxford in science, intellectual history, and theology. A truly prolific author, McGrath has written more than 50 books in such fields as science, theology, and apologetics. I have read many of his books and have found his writings deeply informing and inspiring.

What follows are four provocative quotes from McGrath on theology and apologetics that I’ve used in my social media Theological Thursday segment, along with a brief reaction to them.

“If Christianity has a center, it is Jesus Christ. It is impossible for the Christian to talk about God, salvation, or worship without bringing Jesus into the discussion, whether explicitly or implicitly.”1

It is said that Christianity is Christ. The faith is all about his life, death, and resurrection. We know God through Christ and we know the Father and the Holy Spirit through the incarnate Son. We also embrace salvation by believing that Jesus Christ has made us right with God through doing (keeping God’s law) and dying (atoning for our failures to keep God’s law) on the cross of Calvary.

One of the central differences between Islam and Christianity concerns the different forms of revelation found in the two religions. Muslims view Muhammad as a prophet of God who delivers the inspired text, the Qur’an. Thus Muslims believe they have a revelation from God. Historic Christians view Jesus Christ as God in human flesh. Thus Christians believe they have a revelation of God. In Christianity, God has come to the world in person.

3. The Revelation in Christ

“The basic idea we find throughout the New Testament is that Christians worship and know the same God as Israel. Nevertheless, Christians hold that this God is revealed supremely and finally in Christ.”3

The biblical religions of Judaism and Christianity share much in common. McGrath is right—Christians do worship the same God as the Jews in the following sense: Christians believe in the Jewish Messiah. Yet the revelation that comes in and through Jesus Christ is supreme and final and thus includes the Trinity, the incarnation, and Jesus’s atonement on the cross. In other words, Christians worship Israel’s God fully revealed.

“God is always with us, a gracious and consoling presence on the journey of life, even as we ‘walk through the valley of the shadow of death.’”4

The Scriptures reveal that God is everywhere present and yet he specially indwells all of his people through the Holy Spirit. The Lord is also graciously with believers when they die and leave this life for the intimate presence of God. Christians can be thankful for God’s faithful watchfulness over his people.

What impresses me about Alister McGrath is his ability to speak and write authoritatively in such diverse fields as science, theology, and intellectual history. His diligence has provided all of us with ample intellectual reflection to consider.

Are there Christian theologians that you’ve learned from? Who are they? Visit Reflections on WordPress to comment with your response.

Apologist Demeanors: Are You a Patton or a Bradley?

Have you ever seen the movie Patton? Actor George C. Scott won an Academy Award for Best Actor for his amazing portrayal of the...
History

How does the defense of the faith (apologetics) influence a person’s embracing the Christian faith (conversion)? In historic Christianity the apologetics enterprise is considered...
History

It never ceases to amaze me what turns up when I clean out our garage: forgotten stuff that brings back memories, and occasionally, old...
Chemistry