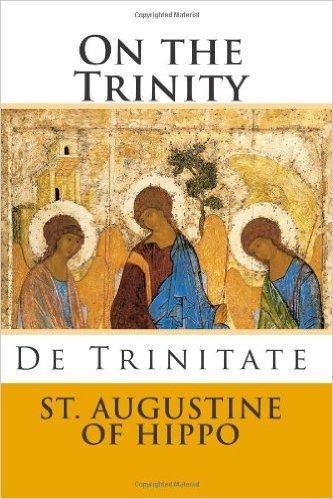 This week’s book, On the Trinity, is by that same St. Augustine and is considered by many scholars to be one of the greatest works about God’s triune nature. It is a long and systematic treatise on a unique and essential Christian doctrine. Augustine’s reflections concerning the Trinity deeply shaped Western Christendom.

Augustine of Hippo (354–430) was a Christian theologian, philosopher, rhetorician, apologist, and church bishop. After the apostles, he may have done more to shape the Christian world-and-life view than any other Christian thinker. For more about him and his unique accomplishments, see my article “Christian Thinkers 101: A Crash Course on St. Augustine.“

Written over the years 399–419, On the Trinity is divided into 15 books. This work contains the first fully systematic theological presentation of the doctrine of the Trinity. Augustine explains and defends orthodox Trinitarianism, asserting that the one true God exists eternally and simultaneously as three distinct persons: Father, Son, and Holy Spirit. He vigorously rejected all forms of subordinationism that would treat the Son or the Holy Spirit as inferior in nature to the Father. He defended the Western church’s position that the Holy Spirit proceeds from both the Father “and the Son.” (The use of the phrase “and the Son” [Latin: filioque] in the Western version of the Nicene Creed later gave rise to the filioque controversy that sharply divided the Eastern and Western churches in the eleventh century.)

A unique feature in Augustine’s approach to the Trinity is his engaging use of psychological analogies. He argued that since the triune God created the world, one would reasonably expect to find “traces of the Trinity” in creation. And since human beings were made in the expressed image of the triune God (imago Dei), traces of the Trinity are likely to be found in human beings. Augustine believed the human mind (composed of “intellect, memory, and will”) reflected this three-in-one concept. But he acknowledged that ultimately all human analogies of the Trinity are imperfect and that believers must await the next life to see and understand God more intimately. Augustine believed that this Trinity doctrine was derived from, and fully supported by, sacred Scripture.

“Let us believe that the Father, and the Son, and the Holy Spirit is one God . . . a trinity of persons mutually interrelated, and a unity of an equal essence.”1

On the Trinity is one of Augustine’s theological masterpieces. The book shaped the way Catholics and Protestants came to think about God’s unique triune nature. And the doctrine of the Trinity may stand as historic Christianity’s most distinctive belief.

Here is a recommended paperback version: Augustine, On the Trinity (Veritatis Splendor, 2012).

Christians are uniquely positioned to transform the culture for Christ as they engage it at the highest academic levels, especially in science.
Education

I’m a Scientist Because God Pursued Me

"Where can I go from your Spirit? Where can I flee from your presence?"Psalm 139:7 The impression that God was pursuing me and had something...
Education

Take Up and Read: On the Incarnation

This blog series on Reflections is intended to encourage Christians to read more vigorously by providing a beginner’s guide to some of the Christian...
Education