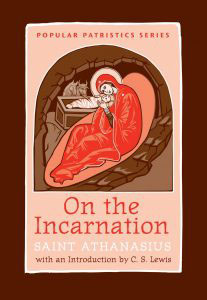 This week’s book, On the Incarnation, by St. Athanasius is considered one of the most important theological works in the early Christian church. Athanasius’s book masterfully tackles a critical doctrinal topic, and as a result, it helped shape Christian orthodoxy.

Athanasius (ca. 296–373) is one of the most respected persons in church history. His articulation and defense of essential Christian doctrine (primarily Christology) earned him the title “Father of Orthodoxy.” All three branches of Christendom—Orthodox, Catholic, and Protestant—admire him. With his rare combination of a tenacious character and depth of theological insight, St. Athanasius championed Christian doctrine at a time when the faith was extremely vulnerable to heretical attack. For more about him and his accomplishments, see my article “Christian Thinkers 101: A Crash Course on St Athanasius.”

As the title indicates, Athanasius’s book provides an explanation and defense of the historic Christian doctrine of the incarnation in the context of heretical attacks against it. Athanasius affirms that the essence of Christianity is found in the historic truth-claim of Jesus Christ being God in human flesh (a single person with both a divine and a human nature). However, during Athanasius’s lifetime, the incarnation would be directly challenged by the influential Arian heresy. Arius of Alexandria (ca. 256–336) taught that Christ (the Son) was not truly equal to the Father in nature but was rather a created being.

Divided into nine chapters, On the Incarnation explains and justifies the incarnation. Moreover, the book addresses humankind’s creation and fall and shows how the incarnation of Jesus Christ distinctly solves man’s predicament. Athanasius also addresses non-Christian challenges to the incarnation that come from both Jewish and Gentile sources.

The following quote is attributed to Athanasius as he reflected upon the truth of the incarnation in light of the Arian heresy:

Jesus, whom I know as my Redeemer, cannot be less than God.1

On the Incarnation is a doctrinal and theological classic. Its central theme that only Jesus Christ the God-man can save lost sinners defines historic Christianity. In reading Athanasius’s work, you discover how this great fourth-century Christian theologian and apologist understands and justifies the faith.

In his introduction to Athanasius’s book, C. S. Lewis writes: “When I first opened his De Incarnatione I soon discovered by a very simple test that I was reading a masterpiece. . . . Only a master mind could, in the fourth century, have written so deeply on such a subject with such classical simplicity.”2

His ability to write about Christianity’s most profound truth with great clarity makes Athanasius’s book one of my doctrinal favorites.

As my daughter, a high school senior, prepares for the next steps in her life, I’m noticing how my role in her life is...

My daughter’s dinosaur phase lasted about 10 years. At age 4, she dressed up as a paleontologist for Halloween. Imagine a 4-year-old in a...
Education