Given its dependence on Judaism and the Hebrew Bible, historic Christianity has always been a textual and literary religion. Because of their belief in a verbal, propositional revelation in Scripture (Old and New Testaments), Christians, like Jews before them, have been known as “People of the Book.” With that bookish past, I think Christians have good reason to be vigorous and dedicated readers. 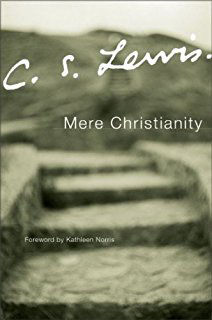 This new blog series on Reflections is intended to encourage Christians to read more vigorously by providing a beginner’s guide to some of the Christian classics in such fields as theology, philosophy, and apologetics. Hopefully a very brief introduction to these important Christian texts will motivate today’s believers, as St. Augustine was called to in his dramatic conversion to Christianity, to “take up and read” (Latin: Tolle lege) these classic books.

The first book in this series was written by “Oxbridge” literary scholar C. S. Lewis (1898–1963), who also served as a lay Anglican theologian and a versatile Christian apologist. He was perhaps the most influential Christian thinker and writer of the twentieth century. For more about him and his accomplishments, see my article “Christian Thinkers 101: A Crash Course on C. S. Lewis.”

The subject matter of Mere Christianity came from a series of BBC radio talks that Lewis gave during the Second World War. The book’s basic content first appeared in published form as three pamphlets and was later expanded into a book in 1952. This work may be Lewis’s most popular nonfiction book.

In the preface, Lewis presents the idea of “mere Christianity,” which reflects far more than a book title. This term refers to a group of essential and “agreed, or common, or central” Christian doctrines (such as the Trinity, the incarnation, and the atonement) that all branches of historic Christendom (Orthodox, Catholic, Protestant) affirm. Thus, the goal of the book is to explain and defend the central beliefs and values of common Christianity.

Lewis introduces the Christian faith by dividing the book into four parts. Part one discusses the moral order found in the universe as a clue to the cosmos’s meaning and as a pointer to its creator God. Thus, this first section focuses heavily on Lewis’s discussion of the origin and implications of morality.

Part two explores the central doctrinal truth of historic Christianity. What makes the Christian faith different from all other religions is what Lewis calls “the shocking alternative”—God has become incarnate in the person of Jesus Christ. Lewis thus explores the incarnation and its implications for the salvation of human beings.

Part three examines Christian behavior in terms of morality and Christian lifestyle. Lewis covers the cardinal and theological virtues as well as the deadliest of all vices. He also provides a Christian discussion of sexual morality and the institution of marriage.

Part four introduces the doctrine of the Trinity as the unique understanding of biblical monotheism. Lewis helps explain some of the deeper theological concepts connected to God’s triune nature. Lewis closes the book with an exploration of what it means to be transformed by God by becoming new creatures in Christ Jesus.

This book is a contemporary classic and was voted the most important Christian book of the twentieth century. It remains a perpetual bestseller more than 60 years after it was written. Christian leaders Charles Colson and Francis Collins acknowledge Mere Christianity as playing a critical role in their coming to faith in Christ.

Mere Christianity was the first Christian book that I ever read, and it powerfully impacted my thinking. What impresses me most about this book is its lucid style and single-minded focus on the essence of the faith. Knowing what you believe and why you believe it can help all Christians fulfill their God-given role in drawing others to follow Christ. Lewis’s classic book can provide great assistance in that critical enterprise.

Take Up and Read: Engaging Unbelief

A very brief introduction to these important Christian texts will motivate today’s believers, as St. Augustine was called to in his dramatic conversion to...
Education

Grasping God’s Nearness — Even When He Seems Far

Many people have shared stories about how Beyond the Cosmos, in its earlier editions, impacted their life—
Philosophy & Ethics