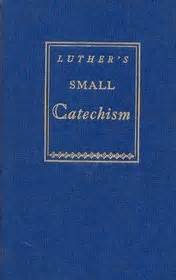 This week’s book, Luther’s Small Catechism, was written by the man known as the father of the Protestant Reformation. More than merely a Lutheran text, however, Martin Luther’s brief theological work reflects a timeless—and in many ways a universal—classic of historic Christian education.

Martin Luther (1483–1546) is widely considered the greatest theologian of the Protestant Reformation. His fresh reading and reflections from Scripture served to birth a new branch of Christendom in the sixteenth century. His writings and the major events of his life mark him as one of the most influential Christian leaders of all time. For more about him and his accomplishments, see my article “Christian Thinkers 101: A Crash Course on Martin Luther.”

Written in 1529, this book was the result of Luther’s visit to various churches in which he found the congregations to be poorly educated in the essential teachings of historic Christianity. Thus Luther’s Small Catechism (German: Der Kleine Katechismus) was intended as a popular guide or handbook for basic instruction in the faith. Over the centuries the catechism has been used to refresh the faith of older Christians, to instruct adult converts, and to teach children the basic truths of Christianity. Luther purposely utilized a Q&A format so that teachers and parents could educate the youth.

Luther’s basic manual of Christian faith includes discussion of such biblical and theological topics as the Ten Commandments, the Apostles’ Creed, the Lord’s Prayer, and the sacraments of baptism and the Lord’s Supper (or communion). The work also includes formal morning and evening prayers as well as a brief dictionary of key biblical and theological terms. While there are clearly places in the catechism that reflect a distinctive Lutheran theological perspective, for the most part this book serves as a general introduction to basic Christianity. So Christians from various theological and denominational backgrounds could significantly benefit from reviewing this clear and careful work of historic Christian thought.

Here is a brief sampling of the catechism reflecting its Q&A format:

Q. Who is Jesus Christ?

A. Jesus Christ is true God, begotten of the Father from eternity, and also true man, born of the Virgin Mary.1

Martin Luther was a prolific author who wrote a number of theological works that deeply influenced Christian history. And while he wrote Luther’s Large Catechism for the advanced instruction of pastors and teachers, it is Luther’s Small Catechism that emerged as one of his most influential works. The appeal of this volume is found in the simple and clear way that it introduces the basic truths of the historic Christian faith. Every Christian can benefit from reading this remarkable doctrinal primer written by one of Christendom’s greatest and most influential theologians.

October 31, 2017 will mark the 500th anniversary of the Protestant Reformation, so now is a good time to begin reading about Protestant Christianity with Luther’s Small Catechism.

Teaching Astronomy from a Christian Worldview

For hundreds of years, astronomy played a vital role in the foundation for a solid liberal arts education. While the trend has moved away...
Education

Logic, often defined as "the principle of correct reasoning," helps to order thinking so a person can arrive at truthful, rational conclusions. Greek philosopher...
Education