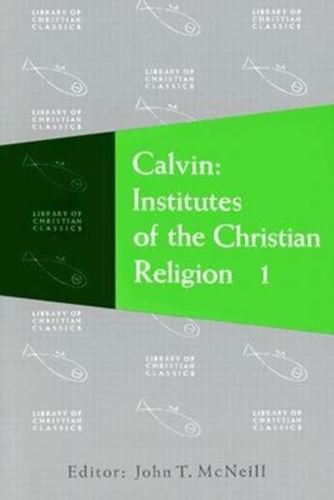 This week’s book, Institutes of the Christian Religion, is by Protestant Reformer John Calvin and is considered one of the masterpieces of Protestant theology as well as one of the most influential works of Western civilization. According to distinguished church historian Philip Schaff, Calvin’s classic theological work is on the level of such masterworks as Augustine’s City of God and Thomas Aquinas’s Summa Theologica.1

French theologian John Calvin (1509–1564) is, after Martin Luther, the second most recognizable person of the Protestant Reformation of the sixteenth century. Calvin is not only the most influential scholar within the broad Reformed theological tradition, but many historians consider him one of the most influential persons in the history of Western civilization itself. Because he affirmed that man’s ultimate allegiance lies only with the sovereign God and not with kings or bishops, some have argued that Calvin successfully laid the theological groundwork for democracy to flourish in the Western world.

The first edition of Institutes of the Christian Religion was published in 1536 when Calvin was only 27 years old. Originally written in Latin, it was later translated into French and then into other European languages. The book represents a full systematic theology of the Reformed tradition within Protestantism. Calvin revised and expanded the work multiple times over the course of his career, with the full-scale work being completed in 1559 (Latin) and 1560 (French).

Intended as a basic introduction or catechism to Christian theology, the starting point of Institutes of the Christian Religion is the Apostles’ Creed. Calvin surveys the work of the Father, Son, and Holy Spirit in creation, revelation, and redemption.

The four divisions within the book reflect the following broad creedal order:

John Calvin was not a philosopher but rather a literary scholar and biblical exegete. Therefore, his contemplation of the triune God is not speculative or theoretical but instead deeply personal.

Below, Calvin describes what has been called in Latin the sensus divinitatis—humankind’s inner sense of the divine (reflecting the apostle Paul’s statements in Romans 1):

There is within the human mind, and indeed by natural instinct, an awareness of divinity. This we take to be beyond controversy. To prevent anyone from taking refuge in the pretense of ignorance, God himself has implanted in all men a certain understanding of his divine majesty.2

Institutes of the Christian Religion is arguably not only the most influential theological text of the Protestant Reformation but possibly of all Western Christendom. Whether adored or abhorred, John Calvin and his interpretation of historic Christianity have deeply influenced Western civilization. Every Christian and student of history should have a familiarity with this amazing work of theology.

Therefore, take up and read Calvin’s Institutes of the Christian Religion!

For more about the life and accomplishments of John Calvin, see “Christian Thinkers 101: A Crash Course on John Calvin.”

How about Reading Some Christian Classics? Part 2

My daughter’s dinosaur phase lasted about 10 years. At age 4, she dressed up as a paleontologist for Halloween. Imagine a 4-year-old in a...
Education

Reading the Outside of the Box

According to the National Geographic News web site, a major archeological discovery, referred to as “Jesus’ Brother’s Bone Box,” has moved closer to authentication...
Education