I am writing this ongoing blog series on Reflections to encourage Christians to read more vigorously and enrich their lives with Christian classics in such fields as theology, philosophy, and apologetics. Hopefully, a brief introduction to these important Christian texts will motivate today’s believers to, as St. Augustine was called in his dramatic conversion to Christianity, “take up and read” (Latin: Tolle lege) these excellent books. 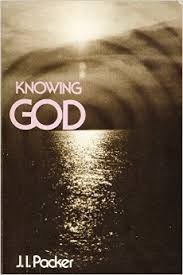 This week’s book, Knowing God by evangelical Protestant theologian J. I. Packer, is a contemporary classic of Christian doctrine. Widely considered one of the most important evangelical theological works of the twentieth century, Packer’s magnum opus (greatest work) has sold more than one million copies in North America alone.

James Innell (better known as J. I.) Packer was born in 1926 in England. He was educated at Oxford University where he studied under C. S. Lewis. Packer is a latter-day Puritan in the Reformed or Calvinistic tradition of the conservative side of the Anglican Church. He has taught for many years and currently serves as Board of Governors’ Professor of Theology at Regent College in Vancouver, British Columbia. Packer is considered one of the most important evangelical theologians of the second half of the twentieth century.

Originally written as a series of articles for a magazine, Knowing God was first published as a book in 1973 and has become a standard evangelical work of doctrine and theology. Consisting of 22 chapters and divided into three parts, the work explores the knowledge and attributes of God and the enjoyment that Christians derive from knowing him intimately.

Part 1 is entitled “Know the Lord” and explains just how and why the believer knows the triune God of historic Christianity who is revealed in the incarnate person of Jesus Christ. Part 2 is titled “Behold Your God” and unpacks many of God’s attributes, such as his majesty, wisdom, goodness, and justice. Part 3 carries the title “If God Be for Us” and reveals the joy of knowing God in personal relationship through Christ.

Packer’s book takes doctrine and devotion seriously as he provides practical guidance to the reader both as a theologian and as a pastor. This influential book provides evidence that reading theology can be inspirational and enjoyable. Packer is well-known for saying that the believer should “turn theology into doxology.”1 In other words, the believer in Christ should turn the study of God into the praise of God.

In Knowing God, Packer warns of the dangers that can result when a person avoids the study of theology:

Disregard the study of God, and you sentence yourself to stumble and blunder through life blindfold, as it were, with no sense of direction and no understanding of what surrounds you. This way you can waste your life and lose your soul.2

Knowing God is widely considered a contemporary masterpiece of evangelical theology and devotion. In 2006, Christianity Today magazine ranked the book number five on their list of “The Top 50 Books That Have Shaped Evangelicals.”3 This is a book that many Christians can read and study over and over throughout their lives.

Take Up and Read: Questions That Matter

This week’s book, Questions That Matter, originally written by Ed Miller and later revised with coauthor Jon Jensen, is not a Christian classic but...
Education

The extraordinary events of 2020 have left many people wondering if we are living in a new era. Times of change and conflict like...
Education

Take Up and Read: Our Triune God