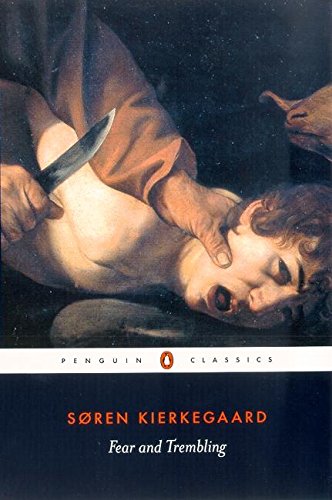 This week’s book, Fear and Trembling, is by Søren Kierkegaard and is arguably his best-known work among his many writings. The book is understood to reflect some of the basic themes of Christian existentialism. While Kierkegaard wrote in obscurity during his lifetime, his works would later become enormously popular, with Fear and Trembling becoming a Christian and philosophical classic.

Danish thinker Søren Kierkegaard (1813–1855) became arguably the most influential philosopher in the Western world a century after his death. As the “father of existentialism” (a philosophy that emphasizes individual existence and freedom), his ideas influenced both religious and secular philosophers. So both Christians and atheists claim the title “existentialist.” For more about Kierkegaard and his accomplishments, see my article “Christian Thinkers 101: A Crash Course on Søren Kierkegaard.”

Fear and Trembling was initially published in 1843 under the pseudonym Johannes de silentio (meaning “John of the Silence”). A number of Kierkegaard’s books were published under fictitious names. The title is a reference to a passage from the Pauline New Testament Epistle Philippians, which says, “Work out your salvation with fear and trembling” (Philippians 2:12).

This work reflects Kierkegaard’s philosophical, theological, and poetic thoughts on the gripping biblical story of God telling Abraham to sacrifice his son, Isaac (see Genesis 22). Abraham’s trust in the Lord is the very foundation of his life and beliefs. Thus, his confidence in God’s moral character and supernatural power allows him to have faith in God in light of a command that seems contrary to reason and ethics.

This work focuses on the the idea that the religious life cannot be reduced to or understood merely in terms of ethics but is instead grounded in personal trust in God’s goodness. For Kierkegaard, life moves through three stages: the aesthetic (natural desires), the ethical (moral choices), and the religious (spiritual awareness). “Faith,” for Kierkegaard, runs deeper than both reason and ethics to a profoundly personal, trusting relationship with God.

Not all Christian scholars agree with Kierkegaard’s conclusions about faith’s relationship to reason and ethics. But Kierkegaard’s writings often include not only philosophy and theology but also poetry, literature, and psychology.

Søren Kierkegaard was a profound and controversial Christian thinker and writer. And Fear and Trembling is a masterful work that reflects both profundity and controversy. A Christian may not always agree with Kierkegaard, but it would be a significant loss to fail to read his challenging writings.

Therefore, take up and read Fear and Trembling.

Do you agree that faith cannot merely be reduced to reason and ethics? Why, or why not? Visit Reflections on WordPress to comment with your response.

Looking Back with Hugh: 25 Years of Reasons To Believe

For more than two decades, RTB founder and president Hugh Ross has led a campaign to heal the breach between science and faith, reaching...
Education

Does Reading Lead to the Good Life?

Here's a question for you to consider: How important is reading for achieving success in life? Leading educational reformer E. D. Hirsch Jr. offers his...
Education