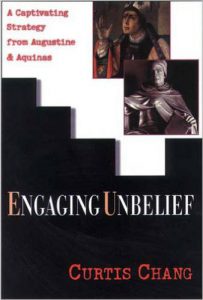 This week’s book, Engaging Unbelief: A Captivating Strategy from Augustine and Aquinas by Curtis Chang, is an important contemporary apologetics work that appeals to two great Christian thinkers of the past for guidance in addressing a contemporary worldview challenge.

Curtis Chang is a graduate of Harvard University and has served as a campus minister with InterVarsity Christian Fellowship. He is a Christian apologist who speaks and writes on various topics but specializes in providing a Christian response to secular postmodernism.

The Christian church has faced a variety of “epochal challenges” during its existence over two millennia. Chang defines an epochal challenge as a paradigm shift or the emergence of a new weltanschauung (German for “worldview”). This new worldview perspective, or comprehensive outlook on life and the world, directly challenges how people understand critical concepts such as truth, reality, knowledge, goodness, meaning, and purpose. The Christian church through the centuries has felt somewhat unsettled during such shifting times with its accompanying changing norms. Accordingly, Christian thinkers have had to strategize as to how to best confront these new perspectives with the enduring truth of the gospel message.

Today’s epochal challenge is postmodernism, which, according to Chang, “now challenges all norms and truths.” Postmodernism as a philosophical outlook is broadly characterized, critically speaking, by such views as religious pluralism, multiculturalism, relativism, and literary skepticism, all of which challenge Christian truth-claims.

Is there an effective Christian strategy for confronting the multifaceted challenges (metaphysical, epistemological, moral, literary, etc.) raised by postmodernism? How, for example, does one effectively present the universal and unchanging truth-claims of Christianity to a culture that rejects the idea of absolute truth? While there have been an assortment of Christian books written in response to postmodern thinking, Chang in five chapters provides a provocative and substantive answer to this question in his book Engaging Unbelief. Reaching back into the apologetic works of two of Christianity’s greatest thinkers, Augustine (354–430) and Thomas Aquinas (1225–1274), Chang has indeed uncovered an interesting strategy to respond to the postmodern quagmire.

Chang’s view is that if evangelical Christians are going to be genuinely successful in responding to the postmodern mindset they should heed the Apostle Paul’s imperative in 2 Corinthians 10:5: “We demolish arguments and every pretension that sets itself up against the knowledge of God, and we take captive every thought to make it obedient to Christ.” Specifically, what does Chang think this imperative actually involves? Since postmodernists prefer to speak in terms of one’s individual “story” (perspective or narrative) rather than in terms of objective truth, this apologetic strategy involves engaging unbelief through penetrating the challenger’s story.

Chang identifies three points that he broadly derives from two classic apologetic works, Augustine’s City of God and Thomas Aquinas’s Summa contra Gentiles. First, the Christian apologist must “enter the challenger’s story” (competing worldview) by becoming thoroughly familiar with its language, categories, and authorities, and thus speak from a shared perspective, though always guided by the gospel. Second, the apologist engages in authentically “retelling the story” from the inside by using again its own language and paradigms, but specifically exposing the story’s explanatory incompleteness and highlighting its so-called “tragic flaw” or inevitable downfall. Third, the apologist engages in “recapturing that retold tale within the gospel metanarrative,” thus showing how the Christian gospel uniquely solves the story’s intrinsic flaw.

The real substance of Chang’s book consists in his detailed and careful explanation of just how Augustine and Thomas Aquinas used this broad strategy to confront the epochal challenges of their respective times. Augustine, living in late antiquity, faced the real possibility of an emerging post-Christian society if the pagan Romans were able to successfully blame Christianity for the decline of the “Eternal City” (Rome) and ultimately for the collapse of the Roman Empire. Augustine’s massive work City of God systematically refutes this pagan story and lays the foundation for an enduring Christian philosophy of history. Thomas Aquinas, living in the High Middle Ages, faced the possible challenge of an enduring religious pluralism if the Islamic intellectual tradition was successful in positioning its religious philosophy as a viable alternative to, and possibly even superior to, a Christian religious philosophy. Thomas’s masterful philosophical treatise, Summa contra Gentiles, sought to set forth a genuinely Christian philosophy that properly integrated the important areas of faith and reason.

There is no consensus among evangelical scholars as to just how to view and respond to postmodern thinking. For some, however, Chang may grant more credence to postmodern epistemology than many would find warranted. A minor weakness in this overall very good and scholarly work is the absence of a good definition for postmodernism.

Here Chang briefly outlines his basic strategy for how Christian apologists can respond to epochal challenges like secular postmodernism:

For a relatively brief paperback (187 pages), Chang presents a detailed and substantive analysis of Augustine’s and Thomas’s monumental apologetic works. His rhetorical strategy drawn from the writings of these two great Christian thinkers is thoughtful and should prove helpful in responding to postmodern thinking. Certainly his intuition to look to Christian apologetic history for answers to today’s apologetic challenges is insightful and refreshing. This reviewer, however, would go further than Chang in advocating that evangelicalism would benefit greatly from embracing much of the theology of these two theological and philosophical giants.

If you would like a short introduction to a few of the key apparent conflicts between science and Christianity, here is a free opportunity...
Education

It’s a Junkyard out There

We've slung chunks of junk out in space and if we don't do something about it, we're sunk. Well, it may not be that...
Education