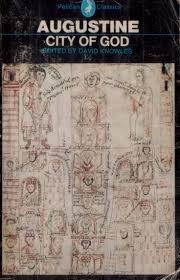 This week’s book, City of God, is by that same St. Augustine and is considered by many scholars to be Augustine’s magnum opus (Latin for “greatest work”). Along with being a timeless Christian text, this work is also considered a literary classic of Western civilization. It is encouraging to know the depth at which Christian writings have influenced classical literature.

Augustine of Hippo (AD 354–430) is widely considered not only the greatest of the Christian church fathers but also, in many ways, the theological father of Western Christendom. In fact, Augustine has influenced both Catholics and Protestants. His diverse writings touch on such fields as theology, philosophy, history, and apologetics. For more about him and his unique accomplishments, see my article “Christian Thinkers 101: A Crash Course on St. Augustine.”

Over his lifetime, Augustine wrote in excess of 5 million words, which makes him arguably the most prolific ancient author of all time. City of God (Latin: Civitate Dei), written intermittently between AD 413 and 427, is considered to be Augustine’s scholarly masterpiece. The title of Augustine’s work came directly from Scripture:

Glorious things are said of you, city of God.

City of God stands as Augustine’s monumental world-and-life-view analysis. It is his longest (more than a thousand pages) and most comprehensive work, and it is considered by some to be his most significant contribution to Western thought. In this book, Augustine laid new foundations in the fields of Christian apologetics and worldview and in the analysis of Christian history.

City of God consists of 22 chapters and can be divided into two major parts. The first part of the work consists of Augustine’s refutation (“Against the Pagans”) of the charge made by some Roman citizens that Christianity was responsible for the decline and fall of the Roman Empire. (Rome had been shockingly sacked in AD 410 by barbarian invaders.) Augustine concludes that the Roman Empire’s demise was not the result of it becoming influenced by Christianity in its later stages but rather the result of the empire’s inability to live up to its highly exalted ideas.

In the second part, Augustine developed his own tale of two cities: “the City of God” and “the City of Man.” The City of God, represented as Jerusalem, has a divine origin and a heavenly, or eternal, destiny. The City of Man, represented as Babylon, has a human origin and an earthly, or temporal, destiny. Augustine saw human affairs, like all things, as being under the control of the sovereign and providential plan of almighty God. In this work, Augustine gave the Western world its first philosophy of history, presenting and defending a distinctly Christian linear view of history.

This volume is widely considered one of the most important Christian books ever written. It seeks to explain the proper place of Christ’s kingdom (or City) in relation to earthly political powers and authorities (the Greco-Roman world). According to Augustine, the City of God is motivated by a different devotion (love) and has a different destiny than the societies that make up the City of Man. Thus, a central theme of City of God is that God’s kingdom purposes—salvation through Christ—transcend all temporal human powers and authorities.

Students of all ages frequently ask for ideas on how to tie in principles from RTB’s testable creation model to their research projects. So...
Education

Take Up and Read: How to Think about the Great Ideas

On my Facebook and Twitter pages I have a weekly segment called #WednesdayWisdom, where I provide thoughtful quotes from great thinkers in various fields....
Education