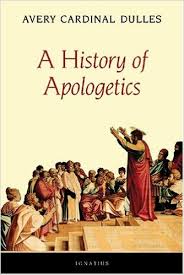 This week’s book, A History of Apologetics, is by Catholic theologian Avery Dulles and is the best book ever written on the topic of Christian apologetics history. Dulles was a convert to Catholicism from Protestantism and served for many years as an academic scholar. Only a scholar of great learning and knowledge could have written such a comprehensive work.

Jesuit scholar Avery Dulles (1918–2008) was a leading American Catholic theologian over the past half century, and was made cardinal in later life, a rare honor for an essentially academic scholar. His background and astute awareness of Catholic theology, philosophy, and church history, combined with his familiarity with Protestant thought, aptly prepared him for such an ambitious work on apologetics.

The aim of the book is straightforward and clear. The author tells “the story of the various ways in which thoughtful Christians, in different ages and cultures, have striven to ‘give a reason for the hope that was in them.’”1 Dulles divides the book into seven chapters, corresponding to six consecutive eras of Christian thought: (1) apologetics in the New Testament, (2) the patristic era, (3) the Middle Ages, (4) from the sixteenth through eighteenth centuries, (5) the nineteenth century, and (6) the twentieth century (in two parts). Each chapter is full of people, ideas, and apologetic arguments and is therefore worthy of a chapter-by-chapter summary in this review.

Chapter one discusses the type of apologetic material that appears in the New Testament (specifically in the four Gospels, the Book of Acts, and in the Pauline and general epistles). Dulles explains that this material centers on the person, nature, mission, and Messianic ministry of Jesus Christ, and highlights Christ’s fulfillment of Old Testament prophecy and His miracles, especially the resurrection. Dulles states that while the Gospels are more concerned with telling the story about Christ—preaching rather than defending their claims—the Gospels contain important apologetic material.

Chapter two addresses the patristic era, or the period of the church fathers which extends roughly from the second through the fifth centuries AD. During this period Christian apologists first engaged the officials of the Roman Empire in a plea for tolerance, but later the focus turned to distinguishing the faith from Judaism and confronting the ubiquitous paganism of the classical Greco-Roman world. The apologetic contributions of eight major Greek and Latin Christian thinkers are assessed, including Justin Martyr, Clement of Alexandria, Origen, Tertullian, Ambrose, Eusebius of Caesarea, Athanasius, and Augustine. Dulles also discusses nine lesser-known Christian thinkers who in varying degrees made important contributions to the developing Christian apologetic enterprise.

Chapter three covers the medieval period or the Middle Ages, which covers nearly a 1,000-year period of church history from the sixth through the fourteenth centuries. Dulles suggests that the apologetic focus of this era was largely threefold. First, there was a need to revive intellectual culture that was harmed by the so-called “dark ages” (the eclipse of classical culture). Second, religious pluralism came to the forefront as Christian Europe was forced to address the growing religious, intellectual, and military challenge posed by Islam. Third, there was the pressing need to explore the proper relationship between faith and reason. Dulles surveys the apologetic theories of such medieval luminaries as Anselm, Peter the Venerable, Peter Abelard, St. Bonaventure, John Duns Scotus, and Thomas Aquinas.

Chapter four evaluates the general apologetic thinking set forth from the sixteenth through the eighteenth centuries, which covered the broad sweep of time and events from the Protestant Reformation to the Catholic Counter-Reformation to the Enlightenment. Dulles views this period as posing serious challenges to Christian truth-claims, and by the time of the Enlightenment, there was a general inability of Christian thinkers to effectively turn the tables on their critics as they had in other eras. Dulles catalogs the apologetic thought of both leading Protestant and Catholic thinkers, including: Martin Luther, John Calvin, Robert Bellarmine, Blaise Pascal, John Locke, Joseph Butler, William Paley, and Gottfried Leibniz, among others.

Chapter five explores the post-Enlightenment period of the nineteenth century. In response to Immanuel Kant and other philosophers, this period saw a shifting on the part of some Christian thinkers away from an overly rational and objective apologetic toward a strong emphasis upon inner subjective religious experience. This period also brought the scientific challenge of Darwinian evolution as well as the challenge of higher critical theories concerning the origin and development of the Bible. Dulles summarizes the lives of such major thinkers as Friedrich Schleiermacher, Georg Hegel, Søren Kierkegaard, John Henry Newman, and many other lesser known apologists and theologians.

Chapter seven covers the second half of the twentieth century and discusses both developments in Catholic and Protestant ventures in apologetics. For Catholicism, Vatican Council II is addressed along with differing approaches to apologetics. For Protestantism, Anglo-American evangelical approaches to apologetics receive attention. Dulles mentions many Catholic thinkers including Hans Küng, Karl Rahner, and John Paul II as well as many Protestants including C. S. Lewis, Richard Swinburne, and Norman Geisler.

All in all, Dulles’s work is an impressive piece of scholarship. It has many appealing qualities to those interested in Christian apologetics. Consider the following five positive features of the book:

A minor weakness is that while Dulles usually works quite hard at being objective and evenhanded, his commitment to Catholicism shows through at times in his evaluation of various apologetic methods and conclusions. Worse still for conservative evangelicals, however, is that his criticism of several ancient apologists’ defense of Scripture is tainted by his own acceptance of certain higher critical theories concerning the Bible (e.g., his rejection of the Mosaic authorship of the Pentateuch and his no doubt late dating of various Old Testament books).

Avery Dulles’s excellent work is a one of a kind treasure in the field of apologetics scholarship.

It seems that all too frequently we read another exciting announcement that an extrasolar planet has been detected, one that is in the “habitable...
Education

Hey, I didn’t know you guys had a Webcast!

Honest, we weren't trying to keep it a secret. RTB has been webcasting since 2001 but new navigators even regular visitors to our site...
Education