Common sense says we should consider pros and cons before making big decisions. Imagine choosing a university to attend or deciding to go through major surgery without weighing all the evidence for and against your choices. The same concept applies to intellectual pursuits—in order to maintain intellectual integrity, we must take into account all the evidence for and against our view. 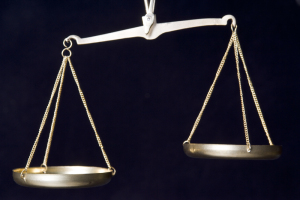 This week’s post closes my series on integrating the Golden Rule into intellectual arenas. Here is a third rule for maintaining integrity and fairness while debating, in person, in writing, and online.

Rule #3: Render an Honest and Fair Assessment of All Evidence for an Opponent’s Position

The suppressed evidence fallacy compounds the straw man (part 1) and red herring (part 2) fallacies. This common mistake occurs when a debater emphasizes only the evidence that supports his or her position while suppressing counter evidence that may point toward—or even require—a different conclusion. The rules of logic and Christian morality compel believers to deal honestly and transparently with facts, evidence, and data.

If the evidence is ambiguous or points away from our own position it is better—even obligatory—to acknowledge it candidly than to shade the truth or engage in intellectual dishonesty. An admission of tentativeness, for example, reflects a refreshing and attractive intellectual integrity. Unfortunately, the fallacy of suppressed evidence is easy to commit. The temptation to engage in (illegitimate) deck-stacking is strong. Given this reality, when we think our opponent has ignored or diminished appropriate counter evidence, then we should by all means make known the broader picture.

Good argumentation presupposes such essential virtues as honesty, fair play, and charity. The passionate pursuit of truth demands nothing less than a commitment to sound reasoning and to God-honoring intellectual exchange. For believers, these three rules for intellectual conduct can not only keep discourse civil, but also demonstrate that we value people more than winning arguments.

For further study on these points of reasoning and argumentation, see the textbooks I use as a college instructor of logic: T. Edward Damer, Attacking Faulty Reasoning, 4th ed. (Wadsworth, 2001) and Patrick Hurley, A Concise Introduction to Logic, 10th ed. (Wadsworth, 2008).

Ethics in “The Hunger Games”

How do the choices we make in pursuit of an end goal impact the outcome of our endeavors? If our cause is worthy enough,...
Philosophy & Ethics

Scholars involved in what has come to be known as “the Intelligent Design movement” deserve respect.
Evolution

Logic: A Necessary Tool for Truth

As the nonscientist on RTB’s five-person staff scholar team, I sometimes feel like the odd man out. Because I’m a philosopher, I often look...
Logic & Reason