Frenchman Blaise Pascal (1623–1662) was one of the founding fathers of the scientific revolution in the seventeenth century. A true Renaissance man, Pascal was an eminent mathematician, physicist, and logician, and an intuitive Christian thinker. As a Christian philosopher, theologian, and apologist, Pascal provided a penetrating analysis of Christianity’s broader world-and-life view. He accomplished all of this before dying at the early age of 39.

Yet, while he is one of the most famous thinkers in Western civilization, there are three things you may not know about Blaise Pascal. I hope you’ll find these points enriching and helpful in your apologetics conversations. 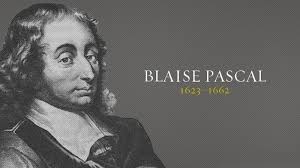 1. Pascal was a homeschooled prodigy.

Blaise Pascal was born in Clermont-Ferrand, France, on June 19, 1623. Blaise’s mother, Antoinette Begon, died when he was three years old, leaving him and his two sisters in the sole care of their father, Étienne. At that time, Étienne was a gifted mathematician who served as a royal treasurer and tax official for the French government. A loving and wise man, Étienne soon resigned his position in order to stay home and educate his children.

Hoping to expose his offspring to as much cultural and intellectual stimulation as possible, Étienne moved his family to Paris. There, he created an intellectual incubator for his children by putting them into social situations with many of France’s leading intellectuals. Blaise, in particular, was taken to a weekly discussion group that featured many of the foremost scientists and mathematicians of the time. Young though he was, his intellectual genius was soon widely recognized—even the great French rationalist philosopher René Descartes (1596–1650) acknowledged Blaise’s precocious accomplishments.

2. Pascal was an inventive genius.

Like all truly great inventors, Pascal’s technological intuition and productive imagination put him far ahead of his time.1 His creative technological experimentation resulted in the invention of the syringe and the hydraulic press, and in the development of the first public transportation system in Europe. His most famous invention, however, resulted from his attempt to help his father avoid the arduous task of calculating taxes.

Pascal became convinced that if a clock could calculate the hour, then a machine could also successfully perform mathematical calculations. He then proceeded to invent a mechanical adding device that was, essentially, the first digital calculator. Today Pascal’s calculator is considered one of the first applied achievements of the early scientific revolution and the precursor to the modern computer2 (hence, the reasons a modern-day computer-programming language was named after him).

3. Pascal had a dramatic conversion to Christianity about which he was tight-lipped.

While Pascal was raised in what could probably be called a nominal Roman Catholic family, at age 31 he underwent a profound religious experience. He apparently had a spiritual encounter while crossing the Seine River in Paris, reportedly during a storm. The nature of this encounter is unknown as Pascal never described the specifics of the experience.

However, though Pascal told no one of the event (called the “Night of Fire”), he did write a memorial to it. He carried this testimony with him the rest of his life—he even had the words sewn into his clothes! The Memorial was discovered only after his death; a portion of it reads as follows:

Fire
God of Abraham, God of Isaac,
God of Jacob, not
of philosophers and scholars.
Certainty, certainty, heartfelt,
Joy, peace. God of Jesus Christ…
He can only be found by the ways taught in the Gospels…
Jesus Christ. Jesus Christ…
Let me not be cut off
from him for ever!3

From that night onward, Pascal devoted his life principally to his philosophical and religious writings in the defense of Christianity.

Pascal’s broad achievements mark him as one of the most advanced thinkers of his time. He has much to offer us today as we engage a technologically oriented culture with scriptural truth. So how about taking up his book Pensées (French for “thoughts” or “reflections”)? You’ll be reading a Christian classic as well as a masterwork of Western civilization.

Which of the three points about Pascal did you find most interesting? Visit Reflections on WordPress to comment with your response.

How JFK and C. S. Lewis Influenced My Life

Two men I’ve been reading about for virtually my entire life but for very different reasons died on the exact same day. For more...
Education

Two More Movies to Make You Think in 2018

How much of your recreation time is devoted to watching movies? For many people, watching films at the theater and viewing movies at home...
History

Growing up, I always sensed that I was searching for some deeper meaning in my life. I didn’t know what that meaning would entail,...
History