The third most abundant molecule in the universe has the most well-known chemical formula—H2O, or water. No one disputes the utility of oxygen for life, but hydrogen plays an equally critical role as a key component of water. Just as the existence of carbon and oxygen relies on a careful balance in the laws of physics, so does hydrogen.

Nearly 14 billion years ago, the known universe came into existence via the big bang. The unbelievable temperatures and densities made the early universe unrecognizable compared to today, but things began to quickly take shape. Roughly 10 seconds after the big bang, the universe consisted of protons, neutrons, and electrons—at least concerning the ordinary matter of our familiar world. Over the next few minutes, as the temperature continued to cool, the protons and neutrons assembled into some heavier nuclei, mainly helium. At this point, the composition of the universe was 75 percent hydrogen, 25 percent helium-4, 0.01 percent deuterium and helium-3, and trace amounts (10-8 percent) of heavier elements like lithium-7. However, slight changes in the strengths of the electromagnetic and nuclear interactions would have led to a much different picture.

As protons and neutrons collided, they fused together to make heavier elements. The slowest step in this process was the formation of a deuteron (one proton and one neutron). Once sufficient quantities of deuterons existed, they quickly added more neutrons and protons until something else stopped the sequence. (As figure 1 shows, elements with lots of protons and neutrons exist.) While the process would naturally stop at the formation of iron (since adding more protons or neutrons beyond this element consumes energy instead of producing energy), ending the chain at iron would likely result in no leftover hydrogen. Fortunately, the laws of physics conspired to ensure the universe would contain plenty of hydrogen.

Producing an Abundance of Hydrogen

The diagonal lines in figure 1 represent nuclei with the same number of nucleons (nucleons = protons + neutrons). Figure 2 zooms in on the region with small amounts of protons and neutrons. The solid boxes are stable nuclei, whereas the dashed boxes are nuclei with short half-lives (less than one second). Notice that no stable nuclei exist for nucleon numbers 5 or 8. These two gaps stopped the fusion chain during the first few minutes after the big bang and resulted in a universe with lots of helium and an abundance of hydrogen. 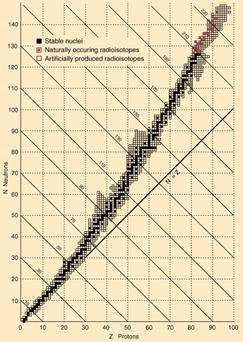 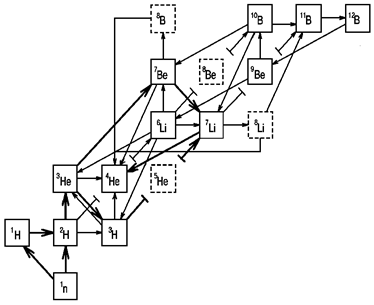 Not only do the laws of physics governing the stability of nuclei cause the 5- and 8-nucleon gaps, but they also prevent other catastrophes that would remove all hydrogen. Because the neutron is heavier than a proton, fewer neutrons formed in comparison to protons as the universe cooled. Neutrons also decay with a half-life of 10 minutes, further reducing the neutron-to-proton ratio. If protons existed in the same ratio during this period of fusion, all the protons would fuse to deuterium leaving none of the single proton form of hydrogen. More importantly, if a nucleus with just two protons were stable, all the protons necessary for hydrogen atoms would fuse into this diproton state.1 Yet, the laws of physics produced a sufficiently small neutron-to-proton ratio and an unstable diproton nucleus.

Some might respond that this fine-tuning is just a selection effect; the laws of physics had to take some form, and then life developed based on the result. However, the fine-tuning shows more sophistication. It’s not that any set of elements would do; rather, water and carbon both exhibit an extraordinary set of characteristics that life requires to flourish. That the laws of physics take a form that not only permits the existence of hydrogen, carbon, and oxygen, but also facilitates and even drives their production indicates that the universe is designed with a purpose.

The Higgs Boson: Discovered or Nonexistent?

Scientists have finally discovered the Higgs boson—or have they?
Physics & Mathematics

Detailed measurements confirm the biblical idea of unchanging laws of physics (“the fixed laws of heaven and earth”—Jeremiah 33:25). As light passes through hydrogen...
Physics & Mathematics

New Boson Measurements Shed Light on Physics of the Universe

I remember sitting in a crowded room of scientists back in February 2003. The Wilkinson Microwave Anisotropy Probe (WMAP) had launched a couple of...
Physics & Mathematics