In parts 1 and 2 of this series Fuz Rana, Hugh Ross, and Jeff Zweerink recounted their experience on RTB’s Cruise Conference. This time we hear from philosopher/theologian Kenneth Richard Samples to hear how this Southern California native fared in the frigid temperatures of the Alaskan Coast.

Ken, our readers might not know you’re the only RTB scholar who was born and raised in Southern California. (Hugh, Fuz, and Jeff hail from Vancouver, Iowa/West Virginia, and Missouri, respectively.) As a fellow native, I have to ask: How did your thin LA skin handle the weather in Alaska?

Well, first, because I was born and raised in Southern California, I’m a real Dodger and Laker fan! (laughs) But going to Alaska and seeing how the ice was clinging to the mountain sides was an amazing thing. Of course, when I walked outside of the ship I had to be well covered up. Still, I would say that though the weather was cold, the surroundings were very appealing. And my wife loves the outdoors and sea animals, so it was nice to go somewhere with her.

Tell us a bit about the presentations you gave while on the cruise?

I gave two presentations. The first is a brand new talk called C.L.E.A.R. Pointers to God, which argues that belief in God explains all of the most meaningful realities of life. The second was a breakout session, which covered the highlights of my book that’s coming out next spring called 7 Truths that Changed the World.

Can you explain what these C.L.E.A.R. pointers are?

My mind isn’t quite as sharp as it once was (I’m in my 50s now), so I try to use a mnemonic or acrostic device to aid in memory not only for myself but for my students. The C.L.E.A.R. pointers to God are Cosmos, Life, Ethics, Abstraction, and Religion. God makes sense of the cosmos and of the life we live. He is the anchor that makes ethics (moral principle) valid and consistent. He gave grounds for abstract ideas like the laws of logic. And, lastly, religion represents humans’ awareness of God. The broad point is that God makes sense of the world, the universe, and our lives.

How about a quick synopsis of 7 truths, or “dangerous ideas,” as I’ve heard you call them, in your next book?

These seven truths are dangerous in that they turned a paradigm upside-down. The first is what I call Christianity’s most dangerous idea—Christ’s resurrection. It goes against the universal notion that we’re all going to die and stay dead. The second truth, the incarnation (God became flesh) definitely distinguishes Christianity from other religions. The third is creation ex nihilo—God called the universe into existence out of nothing. This truth is compatible with what we now know about beginning of the universe. The fourth idea is that God provided C.L.E.A.R pointers to Him. The fifth is that salvation is by grace alone; it’s not achieved by human works. The sixth truth is that we are created in God’s image. The seventh and final dangerous truth is that God has a purpose for pain and suffering. He suffers with us, and for us, and promises to do away with evil, pain, and suffering.

It’ll be an interesting read for sure, and we here at RTB are looking forward to finally seeing it in print!

Yes. It took me a long time to write that book. And then it had to get edited. And then edited again.

It’s just, sometimes I wonder if people appreciate how much work goes into writing a book.

True. As you know, the topic for the cruise was Future Faith Challenges. What would you say is the most pressing faith challenge believers face today?

That’s a really good question. My talk responded to atheists’ arguments that everything can be explained without a need for God. But I think a greater challenge than atheism is getting the average, everyday Christian to have a good understanding of our faith. It’s really important to know what we believe and why we believe it. 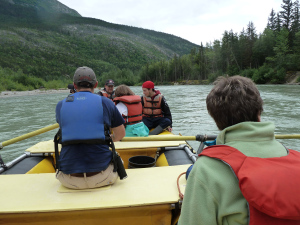 So, are there any stories you want to share from the cruise?

I think this came out in the others interviews, but I have to say Fuz’s wardrobe malfunction stands out. One thing I really like about Fuz is that he has this admirable trait of being able to roll with the punches. But my own story is that my wife and I were having lunch one afternoon and noticed a group of people kayaking across the water in the rain. We joked that Hugh and Kathy were probably in that group. Turns out Kathy was, and she was engaged in an evangelistic conversation! The Rosses take on these challenges and they have these spiritual evangelistic stories. That doesn’t happen to me. I’ll go to the bank or the store and nobody walks up to me and says I want to accept Jesus as my personal savior. But with Hugh and Kathy that seems to happen very frequently.

Sounds like you had quite the time on the cruise.

You know, even though I’m a quiet guy if you wind me up, you get all this material. (laughs)

It was great catching up with you, Ken. Thanks for sharing your experience!

Well, readers, you now have the full scoop from the scholars. But check back in a couple of weeks to hear from some of our other staff who joined them on the cruise. And if you haven’t already, connect with RTB_Official and Take Two on Facebook.

If you’re part of the blogosphere or are on a social networking site, chances are you’ve seen (or been “tagged” with) the “page 123”...

Mortimer Adler was one of the most influential philosophers and educators of the 20th century, but what exactly did he believe and what did...

Bioinformatics and a Literal Adam and Eve

One of the hottest debates among evangelicals today centers on the question of whether there was a literal Adam and Eve. Some believers adhere...