What can present-day Christian apologists learn from the apologetics masters of the past? Undoubtedly quite a lot, but works that carefully catalogue the history of Christian apologetics are rare. Such exceptionalism is likely due to the fact that the author must possess substantial scholarly competence in several academic fields, including theology, philosophy, history, culture, and even science. 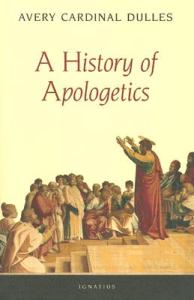 Avery Dulles’s book A History of Apologetics fills a great need in this area. First published in 1971, Dulles’s book was out of print for many years but in 2005, Ignatius Press released a newly revised and expanded edition. Because Dulles’s book is arguably the most voluminous of its kind (at least available in English), this updated version deserves a fresh review for apologists unfamiliar with its content.

Jesuit scholar Avery Dulles (1918–2008) was a leading American theologian over the past half century who was made cardinal in 2001, a rare honor for an essentially academic person. His background and astute awareness of Catholic theology, philosophy, and church history and his familiarity with Orthodox and Protestant thought aptly prepared him to write A History of Apologetics.

The book’s aim is straightforward and clear: to tell “the story of the various ways in which thoughtful Christians, in different ages and cultures, have striven to ‘give a reason for the hope that was in them’ (cf. 1 Pet. 3:15)” (p. xix). Dulles divides the book into seven chapters, corresponding to seven consecutive eras of Christian thought:

Each chapter is chock-full of people, ideas, and apologetics arguments. Next week I will summarize Dulles’s work chapter-by-chapter.

God’s Genuine Love for All

Does God genuinely and savingly love everyone? Many theologians say no. However, there are good and substantial biblical reasons to think that God not...

A Dozen Evidences for the Resurrection of Jesus