The star that appeared to the Magi, indicating the promised Messiah’s arrival and prompting a pilgrimage to Judea, has sparked much speculation.1 The Magi saw the same star reappear one to two years after its first appearance while on their short journey between Jerusalem and Bethlehem, following a consultation with King Herod and his court. This stellar event is recorded nowhere else in ancient literature—so it must have been just dramatic enough to catch the attention of the watchful Magi, but too subtle to warrant the notice of other astronomers and astrologers of that time.

The question is, what kind of celestial event or object fits the timing and description provided in Matthew?

As I noted in a previous article, it is best to hold explanations for the star of Bethlehem tentatively. Matthew 2 gives us few, albeit interesting, details. To complicate matters, the Greek word translated as “star” (aster) can indicate a number of different astronomical bodies, including a star, planet, comet, asteroid, or meteor.2 Fortunately, recent discoveries published in Astronomy and Astrophysics and the Astrophysical Journal have shed new light on the possible explanations for the Christmas star.

Narrowing Down the Possibilities

Most Christmas star explanations claim the phenomenon was some kind of conjunctionin which two celestial objects—two bright planets or a bright planet and the Moon or a bright planet and a bright star—appear close together in the sky. The problem is that the objects in a conjunction typically remain distinguishable as two distinct bodies, but, in Matthew 2, aster appears in the singular form. Of all the conjunctions that occurred within a five-year window of 5 BC (the date most favored by scholars for Christ’s birth), only in the conjunction of Venus and Jupiter (June 17, 2 BC) did the two objects draw close enough together to appear as a single object. However, this blending of the two into one lasted just an hour and was visible as a blended object only in the Americas and in southern and western Africa.3 Furthermore, this conjunction took place following the death of King Herod, which places it too late for the account of the Magi.

Others have speculated that the Christmas star was a bright comet or supernova. But if this were the case, we could expect that Chinese, Indian, Egyptian, Greek, and Roman scholars would have noted it. All of these cultures were diligent about recording dramatic events in the sky, especially comets and supernovae. Such an event would not fit with Matthew’s implication that the star went unnoticed by all except the Magi. It must also be noted that conjunctions, comets, asteroids, and bright meteors do not reappear one to two years later as the same image in the same location in the sky.

There are those who argue that the star was of a supernatural origin, such as an angel or God’s Shekinah glory. The text, however, does not seem to support this conclusion. Though these popular theories seem to be on shaky ground, I would suggest that there is another possibility that is both scientifically and biblically plausible.

Was the Christmas Star a Recurring Nova?

Even before I became a Christian, the Christmas star held some fascination for me. During my teenage years, when I was director of observations for the Vancouver chapter of the Royal Astronomical Society of Canada, I gave a lecture on the star of Bethlehem in which I argued that the star was a recurring nova. The brighter novae (see figure 1) are rare enough that they could catch the attention of the Magi (who, it seems, were waiting for a sign), yet also dim enough to escape the notice of other observers. And, unlike supernovae, a few novae actually can erupt several times. 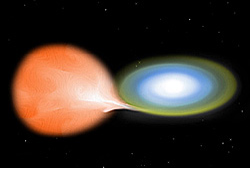 Figure 1: Artist’s Rendition of a Nova
The white dwarf star (right) over time accretes enough mass from a red giant star companion to undergo an eruption where the luminosity of the system increases by several hundred times. For some white dwarf-red giant systems the eruption recur.
Image credit: NASA

There was one snag with my hypothesis. All the recurring novae that astronomers had observed did not recur until more than 10 years later and most did not recur for a century! Nevertheless, as an astronomer, I believed it sufficiently possible for a nova to recur in less than two years and stuck to this explanation (see here and here), although I also suggested that cataclysmic variable stars as an alternate hypothesis.4 But this year, new research provided exciting validation of the short-period recurring nova idea.

Astronomers observed nova M31N 2008-12a recurring within a period of only one year.5 Following this discovery, a team of four astronomers demonstrated that a certain kind of white dwarf star could exhibit recurring nova eruptions with a period as short as two months.6 Such a white dwarf star’s rotation rate would need to be close to zero and its mass would need to be 1.38 times the Sun’s mass. It also would need to be accreting mass from a companion star at a rate of 0.00000036 solar masses per year. The team also showed that a one-year nova eruption period requires a white dwarf with a mass = 1.30 solar masses and an accretion rate = 0.00000015 solar masses per year.

Though rare in our Milky Way Galaxy, such high-mass, high-accreting white dwarfs  are expected to exist in numbers sufficient enough to lend more than adequate credence to the account of the star of Bethlehem. Christians can continue to embrace the Christmas star as the sign that led the Magi to the Messiah who brings light and hope to a dark and weary world.

Bioinformatics and a Literal Adam and Eve

One of the hottest debates among evangelicals today centers on the question of whether there was a literal Adam and Eve. Some believers adhere...

Jonathan Edwards: An Awakening of Heart and Mind, Part 1

A sense of God’s majesty combined with desire for deep spiritual intimacy characterizes one of America’s greatest evangelical thinkers.1 Known as the theologian of...