Skip to content
Just when America looked like it had turned a corner, COVID has seemingly returned with a vengeance. Most of the recent media attention has focused on rising infection rates in Florida, Texas, Arizona, and California. Three of those four (FL, TX, and CA) top the list of most populous states, so their raw case numbers should be no surprise. The fourth most populous state is New York, which (second only to New Jersey) leads not just the US but the entire world in accumulated per capita infections and mortality. Understanding the COVID “comeback” helps us offer an informed, compassionate response.

According to the New York Times, on July 23 cases were on the rise in 39 states, Washington, DC, Puerto Rico, and the Virgin Islands. They are mostly steady in nine states and Guam, including the hardest hit states of NY, NJ, and Connecticut. Cases are declining in Delaware and, surprisingly, Arizona. “Record” total case counts should not be taken too literally. Testing was so scarce in the early stages we have no idea what the actual counts should have been in March and April. Increasing hospital admissions confirm that COVID cases have increased in a few populous regions, so the rising cases most plausibly reflect both increased testing and regional upswings.

I have been blogging about the COVID crisis periodically this year, addressing some of the epidemiological and policy factors but the spiritual dimensions as well. On May 25, as cases were winding down and shutdown policies were loosening, I predicted “a continued slow burn with occasional spikes in densely populated regions or should mass gatherings resume.” That indeed seems to be what we are presently witnessing.

The concept of “flattening the curve” that figured prominently in the national discourse was based on the work of the Department of Epidemiology at the Harvard School of Public Health. Their strategic analysis was published in Science in May of this year.1 An implicit, if flawed, assumption was that this analysis would describe the whole nation. Each state and US territory started from different phases of the outbreak and employed different policies; thus, there was never one curve, but more than fifty. Indeed, different states exhibited radically different trajectories in the months following the initial March lockdowns.

The Curves Took Many Shapes

New York mostly failed to flatten the curve. It saw a massive spike in infections and deaths, followed by a continuous decline to now very low levels. New cases, hospitalizations, and deaths in New York City have dropped to almost nothing. This follows the pattern seen in the worst-affected nations, including Belgium, the United Kingdom, Sweden, Italy, Spain, and France. New Jersey flattened it only slightly. Both NY and NJ suffered per-capita fatality rates double that of Belgium and triple that of Sweden. Here we see the infection curve for New York: 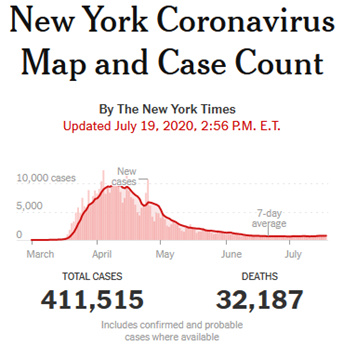 Some states, however, did flatten the curve. For example, Illinois, Indiana, and Maryland saw moderate infection rates spread out over many weeks. Most of them now have steadily declining fatality rates: 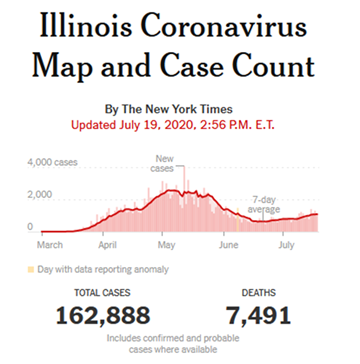 Many states totally squashed the curve. Instead of spreading out the cases over time, their shutdowns had the unfortunate consequence of merely pushing the curve, and hence the crisis, forward in time. Until mid-June, FL, TX, AZ, and CA had infection rates far below the national averages. Entering the last third of July, their per capita fatality rates remain below the national average, and less than one-third the death rates of NY and NJ. The Harvard study predicted this problem:

The curve in the graph below aptly illustrates how the impact of social distancing in Florida was to push the curve into late June and July. 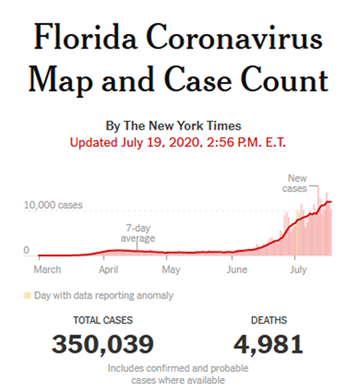 Even though this outcome was predicted, many commentators are blaming these surges on reopening “too quickly.” No one could deny that reopenings could have been handled differently, just as the initial lockdowns could have been handled differently. The nationwide situation is highly fluid and changes quickly. Among the resurgent states, Arizona peaked in the first week of July and new cases are sloping downward. Texas may have peaked as of the second week of July. Florida and California remain on a gentle upslope.

Containing the Virus Is Unrealistic

The SARS-CoV-2 virus is incredibly infectious and easily spread by asymptomatic victims. A recently discovered variant that has become dominant may be even more infectious, though not more deadly. (The original, less infectious strain that circulated through Asia may partially account for Asia’s early suppression success.) There was, and is, no realistic possibility of containment. From the outset, Harvard epidemiologist Marc Lipsitch predicted that 40 to 70 percent of the global population would be infected (possibly much lower; read on).3 Masks and social distancing can slow the spread. In so doing, they accomplish the original purpose of “flattening the curve:” to prevent hospitals from being overwhelmed. Unfortunately, many people got the message that through such efforts we could stop the pandemic in its tracks. That became impossible about six months ago. The overwhelming percentage of cases are now known to be mild or asymptomatic. According to Dr. Robert Redfield, director of the Centers for Disease Control, the true number of cases in the US is likely to be ten times higher than the number so far diagnosed.4

Much Worse Than the Common Flu, but Not as Deadly as Initially Believed

The infection fatality rate (IFR) is confirmed at a mean value between 0.5 to 0.8%. This is in the range initially predicted by internationally renowned researcher John Ioannidis in mid-March.5 By early June, the CDC offered as its best estimate 0.4%. On July 13, the CDC revised its estimate upward to 0.65%. However, there is not a single IFR but a range. The local death rate may be higher (Bergamo, Italy, possibly as high as 1.0%) or lower (Singapore, 0.05%) depending upon the age distribution of its victims.

The much-debated herd immunity—that point when so many have been infected that the disease can no longer spread—may kick in at much lower levels than popular wisdom asserts, and could be the best explanation for the dramatically declining cases in those states and nations with the highest per-capita infection and fatality rates.6 The widely circulated estimate that herd immunity requires a 60–70% infection rate is based on a simple formula with simplistic assumptions. The weakest of these assumptions is that all people are equally susceptible. Consider that there are four widely circulating coronaviruses that cause the common cold. There is reported evidence for pre-existing T-cell immunity to the SARS-Cov-2 virus in unexposed individuals, linked to at least two of the more benign (of the four) coronaviruses.7 The implication is that a large proportion of the population already has partial immunity that would never show up on antibody tests. One international team of researchers, including representatives of Oxford and the National Institutes of Health (NIH), projects that herd immunity could occur at levels as low as 20% after taking into account variations in individual susceptibility.8 (For a further explanation, see “A New Understanding of Herd Immunity,” The Atlantic, July 13, 2020.)

One highly significant observation is that several weeks after reopening in most of Western Europe, all-cause mortality has declined back to baseline (i.e., the death rate is exactly what it ought to be for this time of year). The data increasingly suggest that the Swedish approach (prohibit large gatherings, no closures or lockdown) has been equally effective with far less social and economic disruption. Swedish COVID fatalities have declined precipitously since a mid-April peak. (Their death rate could have and should have been much lower, but for a policy of malign neglect toward the elderly having nothing to do with the decision not to shut down). As of today, the per-capita fatality rate in Sweden remains lower than that in nine US states and the District of Columbia, all of which locked down. 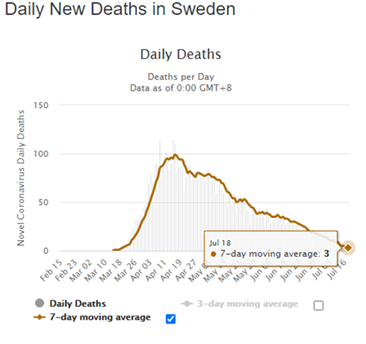 A Vaccine Is Not Inevitable

Every report, commentator, and column that speaks of a vaccine in terms of “when” or “until” is either naïve or disingenuous. Dr. Francis Collins, head of the NIH, stated in an interview that a vaccine has never been developed in less than three years.9 After 40 years, there is still no vaccine against HIV, and that is clearly not from lack of trying. Numerous recent studies have found that neutralizing antibodies to SARS-CoV-2 may disappear after weeks or months.10 This, in turn, has led to additional anxiety over whether a vaccine is even possible.

The primary objective of containment measures has been to spread cases over time to prevent overload of health care systems. In light of that goal, it is legitimate to ask whether the measures really save lives or merely postpone the inevitable. It is mathematically possible that fewer people will get sick or die because of them, yet the long-term net reductions may be minimal. It also wouldn’t be fair to trivialize the benefit of dying six months later rather than now. Risk is an unavoidable fact of human existence. We’d save many more lives by the abolition of cigarettes, mandatory flu vaccines, confiscating all firearms, and raising the driving age to 21—but there’s no popular support for such measures.

This crisis presents people of faith with an opportunity to witness in word and action. Followers of Christ can demonstrate maturity and grace in many ways:

May God guide your efforts as you serve as an ambassador to a confused, hurting world.

No Joke: New Pseudogene Function Smiles on the Case for Creation

Time to confess. I now consider myself an evolutionary creationist. I have no choice. The evidence for biological evolution is so overwhelming…
Biology

Why Is It So Hard to Eat Healthy?

One of the many ways that modern civilization reflects a Christian worldview of the nature of humanity—creation, fall, redemption—is in the kinds of food...
Biology