Genesis 1:24–27 declares that God created large terrestrial mammals before he created human beings. Job 38:39–39:25 selects six different kinds of terrestrial mammals for special mention: the lion, the goat, the deer, the donkey, the ox, and the horse. As I explain in Hidden Treasures in the Book of Job, God created and designed the different species of modern large-bodied terrestrial mammals to serve and please humans beings and to play a critical role in launching and sustaining our civilization.2

Advanced global technology would not have been possible without the terrestrial mammals described in the book of Job. Evidence for this conclusion is not just biblical but also scientific. On those continents (Australia, North America, and South America) where colonizing humans quickly wiped out the resident donkeys, oxen, horses, and other large-bodied terrestrial mammals, the descendants of those humans found themselves unable to advance beyond stone-age technology and unable to develop a large population. To overcome these obstacles it required Europeans importing the missing species of mammals.

Climate Stability and Mammal Density
Even on those continents where humans hadn’t wiped out the terrestrial mammals critical for launching civilization, large-scale organized civilization did not begin right away. There was a time lag of several tens of thousands of years caused, in large part, by Earth’s being in the grip of an ice age. The four scientists who wrote the paper in Acta Oecologica offered additional reasons why.

The team of four first cite and describe several research studies that demonstrate how “climate has played a key role in shaping the geographic patterns of biodiversity.”3 Then they used a macroecological approach to assess—for terrestrial mammals living in mid- and high-latitude northern hemisphere regions—species richness, range sizes, adult body sizes, average lifespans, and average litter sizes from the end of the last glacial maximum 19,000 years ago to the present.

The researchers found that for subregions in both Eurasia and North America there was a strong correlation between the number density of terrestrial mammals and the degree of climate stability in the subregion. They also noted that the greater the climate instability of a subregion, the smaller the average body size of the terrestrial mammals dwelling there and the greater the geographic range size for each mammal species.

These three correlations demonstrate that food availability for terrestrial mammals must be tightly linked to climate stability. Indeed, the correlations were most strongly manifested for North American mammals. Since North America experienced much greater climate instability since the last glacial maximum than did Eurasia, these stronger correlations affirm that increased climate stability yields greater food supplies for terrestrial mammals, which in turn yields a greater density and diversity of mammals.

Earth’s Improbable Extreme Climate Stability
The last 2.6 million years has been marked by the most extreme long-term climate instability in the entire 3.8-billion-year history of life on Earth. The only exception has been the last 9,500 years—a period marked by extreme climate stability. The figure below shows the difference between the mean temperature variations (taken from Greenland’s ice sheet) of the past 9,500 years compared to the previous 8,000 years. 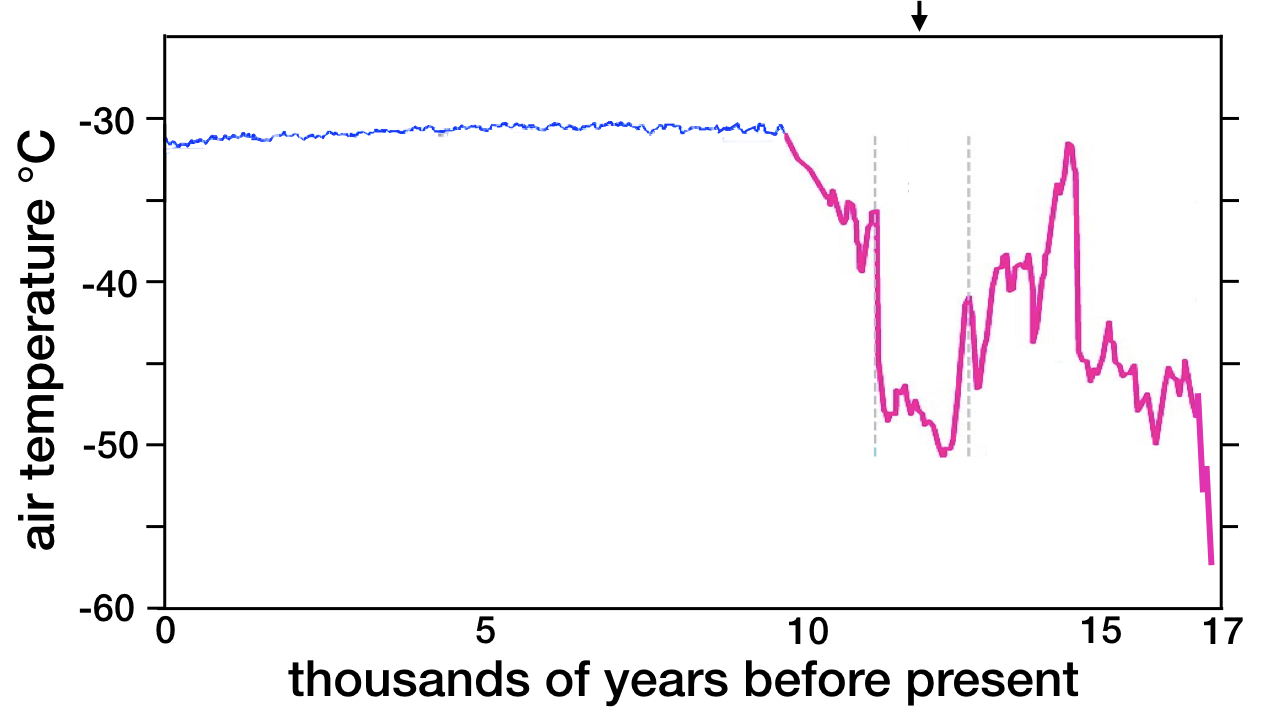 Figure 1: Temperature Variations for Mid-Greenland throughout the Past 17,000 Years. The temperature figures represent the surface air temperature in the central region of Greenland’s ice sheet. The blue curve shows the newly determined temperature record of the past 9,500 years. The purple curve shows the temperature record from 17,000–9,500 years ago derived from oxygen-18 isotope measures in ice cores drilled in the central region of Greenland’s ice sheet. The top arrow and the two dotted lines delineate the start and end times of the Younger Dryas cooling event. Data credit for blue curve: Shaun A. Marcott et al. and Andy May; Data credit for purple curve: United States Geological Survey; Diagram credit: Hugh Ross

In a previous series of blogs here,4 here,5 here,6 and here,7 I explained how a sequence of exquisitely fine-tuned circumstances and events—one would be justified in calling them miraculous—led to the past 9,500 years of extreme climate stability. Amazingly, the global mean temperature over the past 9,500 years has not varied by more than ±0.65°C.

Our period of extreme climate stability (less than four-thousandths of one percent of the duration of the climate instability period) has made possible large-scale specialized agriculture. Thanks to that food-production capacity, humans have established global high-technology civilization and a population of 7.5 billion. I describe ten more benefits we have accrued from the past 9,500 years of extreme climate stability in my book, Improbable Planet.8 Thanks to the four scientists’ research study, we can add one more to the list. Humans get to enjoy and benefit from terrestrial mammals, both domesticated and wild, at the greatest possible abundance and diversity. Next time you consume meat, milk, or cheese or wear a wool sweater or see a cute mammal on a wilderness trek, you now have scientific insight to motivate you to be grateful for this gift of extreme climate stability.

The Explosive Appearance of Skeletal Designs

A team of scientists from Franklin & Marshall College (in Pennsylvania), the University of Chicago, and the American Museum of Natural History in New...
Design

A few years ago, a probe sent on a self-destruct mission into the interior of Jupiter revealed that Jupiter’s atmosphere grew dark and dry...
Design