True confession: I am a sports talk junkie. It has gotten so bad that sometimes I would rather listen to people talk about the big game than actually watch it on TV.

So, in the spirit of the endless debates that take place on sports talk radio, I ask: What duo is the greatest one-two punch in NBA history? Is it:

Another confession: I am a science-faith junkie. I never tire when it comes to engaging in discussions about the interplay between science and the Christian faith. From my perspective, the most interesting facet of this conversation centers around the scientific evidence for God’s existence.

So, toward this end, I ask: What is the most compelling biochemical evidence for God’s existence? Is it:

Without hesitation I would say it is actually another feature: the origin and design of the genetic code. 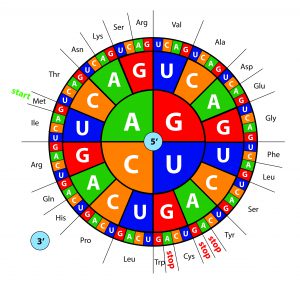 Figure: A Depiction of the Genetic Code. Image credit: Shutterstock

In previous articles (see the Resources section), I discussed the code’s most salient feature that I think points to a Creator’s handiwork: it’s multidimensional optimization. That optimization is so extensive that evolutionary biologists struggle to account for it’s origin, as illustrated by the work of biologist Steven Massey1.

Researchers from Germany raised the same difficulty for evolution recently. Because of the genetic code’s multidimensional optimality, they concluded that “the optimality of the SGC [standard genetic code] is a robust feature and cannot be explained by any simple evolutionary hypothesis proposed so far. . . . the probability of finding the standard genetic code by chance is very low. Selection is not an omnipotent force, so this raises the question of whether a selection process could have found the SGC in the case of extreme code optimalities.”4

Life scientist Massey reached a similar conclusion through a detailed analysis of two possible evolutionary mechanisms, both based on natural selection.9

If the genetic code evolved, then alternate genetic codes would have to have been generated and evaluated until the optimal genetic code found in nature was discovered. This process would require that coding assignments change. Biochemists have identified two mechanisms that could contribute to coding reassignments: (1) codon capture and (2) an ambiguous intermediate mechanism. Massey tested both mechanisms.

The problem with this evolutionary mechanism is that the number of coding reassignments observed in nature is scarce based on the few deviants of the genetic code thought to have evolved since the origin of the last common ancestor. On top of this problem, the structure of the optimized codes that evolved via the ambiguous intermediate mechanism is different from the structure of the genetic code found in nature. In short, the result obtained via the ambiguous intermediate mechanism is unrealistic.

As Massey points out, “The evolution of the SGC remains to be deciphered, and constitutes one of the greatest challenges in the field of molecular evolution.”10

In the face of these discouraging results for the evolutionary paradigm, Massey concludes that perhaps another evolutionary force apart from natural selection shaped the genetic code. One idea Massey thinks has merit is the Coevolution Theory proposed by J. T. Wong. Wong argued that the genetic code evolved in conjunction with the evolution of biosynthetic pathways that produce amino acids. Yet, Wong’s theory doesn’t account for the extreme optimization of the genetic code in nature. And, in fact, the relationships between coding assignments and amino acid biosynthesis appear to result from a statistical artifact, and nothing more.11 In other words, Wong’s ideas don’t work.

That brings us back to the question of how to account for the genetic code’s optimization and design.

As I see it, in the same way that two NBA superstars work together to help produce a championship-caliber team, the genetic code’s optimization and the failure of every evolutionary model to account for it form a potent one-two punch that makes a case for a Creator.

And that is worth talking about.

I enjoy watching The New Yankee Workshop and Ask This Old House. Both of these programs showcase the skills of master craftsman Norm Abrams...
Biochemistry

During my time as a graduate student studying biochemistry at Ohio University, I spent many long days—and nights—working in the laboratories housed in the...
Biochemistry