He was called the “Master of the Telecaster.” He was also known as the “Iceman,” because his guitar playing was so hot, he was cold. Albert Collins (1932–93) was an electric blues guitarist and singer whose distinct style of play influenced the likes of Stevie Ray Vaughn and Robert Cray. 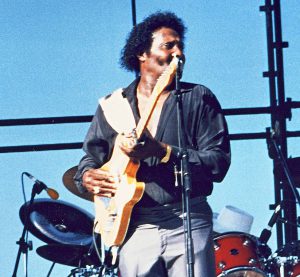 Collins was known for his sense of humor and it often came through in his music. In one of Collins’s signature songs, Honey Hush, the bluesman complains about his girlfriend who never stops talking: “You start talkin’ in the morning; you’re talkin’ all day long.” Collins finds his girlfriend’s nonstop chatter so annoying that he contemplates ending their relationship.

While Collins may have found his girlfriend’s unending conversation irritating, the capacity for conversation is a defining feature of human beings (modern humans). As human beings, we can’t help ourselves—we “talk too much.”

What does our capacity for language tell us about human nature and our origins?

Human language flows out of our capacity for symbolism. Humans have the innate ability to represent the world (and abstract ideas) using symbols. And we can embed symbols within symbols to construct alternative possibilities and then link our scenario-building minds together through language, music, art, etc.

As a Christian, I view our symbolism as a facet of the image of God. While animals can communicate, as far as we know only human beings possess abstract language. And despite widespread claims about Neanderthal symbolism, the scientific case for symbolic expression among these hominids keeps coming up short. To put it another way, human beings appear to be uniquely exceptional in ways that align with the biblical concept of the image of God, with our capacity for language serving as a significant contributor to the case for human exceptionalism.

Recent insights into the mode and tempo of language’s emergence strengthen the scientific case for the biblical view of human nature. As I have written in previous articles (see Resources) and in Who Was Adam?, language appears to have emerged suddenly—and it coincides with the appearance of anatomically modern humans. Additionally, when language first appeared, it was syntactically as complex as contemporary language. That is, there was no evolution of language—proceeding from a proto-language through simple language and then to complex language. Language emerges all at once as a complete package.

From my vantage point, the sudden appearance of language that uniquely coincides with the first appearance of humans is a signature for a creation event. It is precisely what I would expect if human beings were created in God’s image, as Scripture describes.

This insight into the origin of language also poses significant problems for the evolutionary paradigm. As linguist Noam Chomsky and anthropologist Ian Tattersall admit, “The relatively sudden origin of language poses difficulties that may be called ‘Darwin’s problem.’”1

Anthropologist Chris Knight’s insights compound “Darwin’s problem.” He concludes that “language exists, but for reasons which no currently accepted theoretical paradigm can explain.”2 Knight arrives at this conclusion by surveying the work of three scientists (Noam Chomsky, Amotz Zahavi, and Dan Sperber) who study language’s origin using three distinct approaches. All three converge on the same conclusion; namely, evolutionary processes should not produce language or any form of symbolic communication.

Language evolved in no other species than humans, suggesting a deep-going obstacle to its evolution. One possibility is that language simply cannot evolve in a Darwinian world—that is, in a world based ultimately on competition and conflict. The underlying problem may be that the communicative use of language presupposes anomalously high levels of mutual cooperation and trust—levels beyond anything which current Darwinian theory can explain . . . suggesting a deep-going obstacle to its evolution.3

Three Reasons Why Language Is Unique to Humans

Chomsky views animal minds as only being capable of bounded ranges of expression. On the other hand, human language makes use of a finite set of symbols to communicate an infinite array of thoughts and ideas. For Chomsky, there are no intermediate steps between bounded and infinite expression of ideas. The capacity to express an unlimited array of thoughts and ideas stems from a capacity that must have appeared all at once. And this ability must be supported by brain and vocalization structures. Brain structures and the ability to vocalize would either have to already be in place at the time language appeared (because these structures were selected by the evolutionary process for entirely different purposes) or they simultaneously arose with the capacity to conceive of infinite thoughts and ideas. To put it another way, language could not have emerged from animal communication through a step-evolutionary process. It had to appear all at once and be fully intact at the time of its genesis. No one knows of any mechanism that can effect that type of transformation.

Zahavi’s work centers on understanding the evolutionary origin of signaling in the animal world. Endemic to his approach, Zahavi divides natural selection into two components: utilitarian selection (which describes selection for traits that improve the efficiency of some biological process—enhancing the organism’s fitness) and signal selection (which involves the selection of traits that are wasteful). Though counterintuitive, signal selection contributes to the fitness of the organism because it communicates the organism’s fitness to other animals (either members of the same or different species). The example Zahavi uses to illustrate signal selection is the unusual behavior of gazelles. These creatures stot (jump up and down, stomp the ground, loudly snort) when they detect a predator, which calls attention to themselves. This behavior is counterintuitive. Shouldn’t these creatures use their energy to run away, getting the biggest jump they can on the pursuing predator? As it turns out, the “wasteful and costly” behavior communicates to the predator the fitness of the gazelle. In the face of danger, the gazelle is willing to take on risk, because it is so fit. The gazelle’s behavior dissuades the predator from attacking. Observations in the wild confirm Zahavi’s ideas. Predators most often will go after gazelles that don’t stot or that display limited stotting behavior.

Animal signaling is effective and reliable only when actual costly handicaps are communicated. The signaling can only be effective when a limited and bounded range of signals is presented. This constraint is the only way to communicate the handicap. In contrast, language is open-ended and infinite. Given the constraints on animal signaling, it cannot evolve into language. Natural selection prevents animal communication from evolving into language because, in principle, when the infinite can be communicated, in practice, nothing is communicated at all.

Based in part on fieldwork he conducted in Ethiopia with the Dorze people, Dan Sperber concluded that people use language to primarily communicate alternative possibilities and realities—falsehoods—rather than information that is true about the world. To be certain, people use language to convey brute facts about the world. But most often language is used to communicate institutional facts—agreed-upon truths—that don’t necessarily reflect the world as it actually is. According to Sperber, symbolic communication is characterized by extravagant imagery and metaphor. Human beings often build metaphor upon metaphor—and falsehood upon falsehood—when we communicate. For Sperber, this type of communication can’t evolve from animal signaling. What evolutionary advantage arises by transforming communication about reality (animal signaling) to communication about alternative realities (language)?

Synthesizing the insights of Chomsky, Zahavi, and Sperber, Knight concludes that language is impossible in a Darwinian world. He states, “The Darwinian challenge remains real. Language is impossible not simply by definition, but—more interestingly—because it presupposes unrealistic levels of trust. . . . To guard against the very possibility of being deceived, the safest strategy is to insist on signals that just cannot be lies. This rules out not only language, but symbolic communication of any kind.”4

And yet, human beings possess language (along with other forms of symbolism, such as art and music). Our capacity for abstract language is one of the defining features of human beings.

For Christians like me, our language abilities reflect the image of God. And what appears as a profound challenge and mystery for the evolutionary paradigm finds ready explanation in the biblical account of humanity’s origin.

Is it time for our capacity for conversation to separate us from the evolutionary explanation for humanity’s origin?

Yet Another Genetic Difference between Humans and Chimpanzees

Where does Homo antecessor fit?

Who am I? How do I fit into the grand scheme of things? These questions gnaw at someone going through an identity crisis.
Human Origins & Anthropology

Use It or Lose It: Intellectual Exercise Can Save Your Mind

Mortimer Jerome Adler (1902–2001), one of my intellectual heroes, was a philosopher, educator, writer, and editor of the Encyclopædia Britannica series Great Books of...
Human Origins & Anthropology