The God of the Old Testament is arguably the most unpleasant character in all fiction: jealous and proud of it; a petty, unjust, unforgiving control-freak; a vindictive, bloodthirsty ethnic cleanser; a misogynistic, homophobic, racist, infanticidal, genocidal, filicidal, pestilential, megalomanical, sadomasochistic, capriciously malevolent bully. 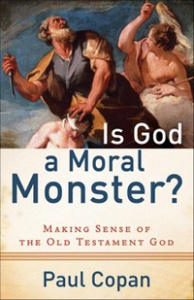 to make most Christians’ blood boil. Unfortunately, we are not always well-equipped to calmly and reasonably respond to such vitriol. Dr. Paul Copan, a well-respected professor of philosophy, author, and speaker, notes that Christians shouldn’t ignore the charges of Neo-atheists like Dawkins. Rather, “As people of the Book, Christians should honestly reflect on such matters.”

Copan’s recent book, Is God a Moral Monster?, is one of my new favorites. Written for a lay audience, the provocatively titled work responds to atheists’ most frequent attacks against the Old Testament God:

Right away Copan exposes a hole in atheists’ arguments: a tendency to skim the surface of biblical topics without looking deeply at the whole text and its historical context. He writes,

The Neo-atheists are often profoundly ignorant of what they criticize, and they typically receive the greatest laughs and cheers from the philosophically and theologically challenged….Their arguments against God’s existence aren’t intellectually rigorous—although they want to give that impression.

Misunderstanding God’s intentions and the nature of the ancient Near East, as well as failure (deliberate or otherwise) to constructively integrate passages throughout Scripture can lead people—both skeptics and believers—to develop a lopsided and fallacious view of God.

In going deeper, Copan demonstrates that the Old Testament reveals an infinitely patient and kind God who metes out justice fairly and vigorously defends the weak, oppressed, and alien. One of the things I appreciate most about Copan’s book is that he not only responds to atheists’ accusations, he helps readers better see God’s goodness and kindness. I wish I could share with you every gem I’ve come across in Is God a Moral Monster? but, I’ll stick to one example: the position and treatment of women in the Old Testament.

Sadly, chauvinism has reared its ugly head within the church—but is such behavior condoned and supported by Scripture? No, it is not. As Copan points out, from the very beginning, God established the equality of men and women as an ideal state. Both genders bear His image (Genesis 1:26–27). Following the Fall and the rise of patriarchal societies, God established laws in Israel that granted women rights and protection unprecedented in the ancient Near East. What may seem like unfair regulations at first glance (to modern eyes) are rules that prevented Israelite men from taking advantage of and abusing women. (Copan addresses several particularly difficult passages to show how, on closer inspection, they support a positive view of women, not negative.)

Mosaic laws aside, the Old Testament is replete with examples of strong female characters (think Sarah, Rebekah, Deborah, and Esther—just to name a few). Proverbs even portrays wisdom as a woman. Yet God never places women on pedestals; they are to be held responsible for their own actions, too. As a woman myself, it means a lot to me to see evidence of God’s regard for His daughters throughout the entire Scriptures. He values us highly and accords us respect and dignity.

In a recent interview with RTB’s own philosopher, Kenneth Samples, Copan says he was inspired to write Is God a Moral Monster? in response to the accusations of atheists like Dawkins, Christopher Hitchens, Daniel Dennett, and Sam Harris:

I’m trying to not shrink from the issues; I’m trying to be straightforward and frank about some of the challenges, some of the misunderstandings of these texts, and looking at the toughest texts that people will level at the God of the Old Testament.

In my view, Dr. Copan does an excellent job of addressing Old Testament difficulties with fair-mindedness, gentleness, and respect. I’d recommend the book to anyone, especially Richard Dawkins.

Resources: Be sure to catch Ken’s interviews with Paul Copan on Straight Thinking.

The Difference between Mystery and Contradiction in Theology

The God of the Bible is infinite and eternal while human beings are finite and temporal. That means humans can never fully comprehend or...
Theology

Not only can new scientific discoveries put to the test whether or not God exists and performed the role of Creator, they can also...
Bible

From Noah to Abraham to Moses: Evidence of Genealogical Gaps in Mosaic Literature, Part 3

We continue this series on gaps in Scripture’s genealogical records by looking at the legacy of Noah and his sons. In particular, this story...
Bible