“You get that from your dad’s side of the family.”

I hear this comment a lot—and with good reason. Of the three daughters born to my parents, I’m most like my father in personality and looks.

Ancestry is an interesting thing. It’s easy to see what traits we’ve inherited from parents, grandparents, and even great-grandparents. But who else resides in our family tree?

Some people argue in favor of Neanderthals as members of humanity’s kinfolk, particularly within European heritage. (As someone of European descent, I’m not thrilled by this suggestion.) Although many paleoanthropologists and others who study Neanderthals and early modern humans maintain that evidence points to Neanderthals as an evolutionary dead-end, some secular researchers insist these creatures were part of our ancestry. On the other hand, certain groups of creationists claim that Neanderthals were actually humans descended from Adam and Eve! 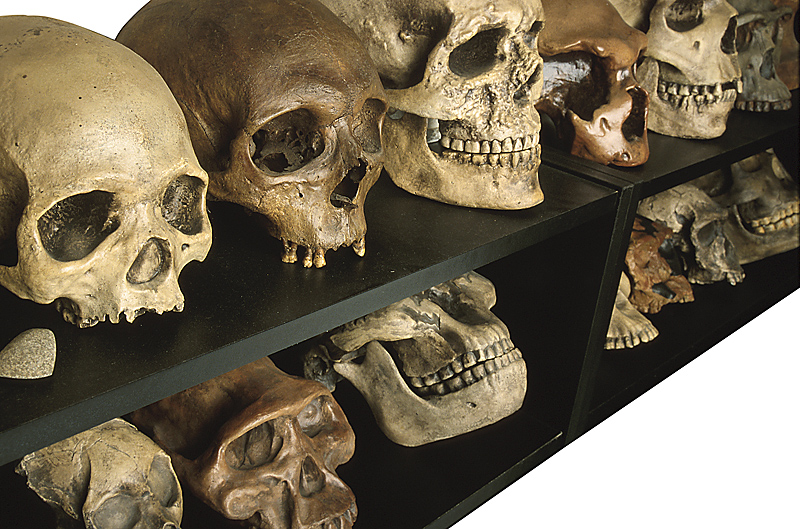 RTB takes a different stance altogether. We view Neanderthals and other hominids strictly as animals created by God, but distinct from humanity in both degree and kind. Despite some biological similarities between hominids and humans, the latter exhibit behavioral characteristics on par with beings made in the image of God, such as language capabilities and, along with that, sustainable and advanced culture.

Language forms a pivotal point in the debate over the human-Neanderthal connection. Did these hairy beasts possess the same communication capabilities as humans? RTB’s own biochemist, Fuz Rana, has written extensively on this topic, including:

Sometimes referred to as “the language gene,” FOXP2 in humans is vital to the development of speech abilities, among other things. Fuz’s two-part series on the language gene and Neanderthals, originally posted late 2007/early 2008, discusses the recovery of a portion of FOXP2 from a Neanderthal DNA sample by researchers at the Max Planck Institute. He notes that this was an astonishing discovery, especially since previous studies indicated that FOXP2 first emerged long after Neanderthals and humans would have split from a common ancestor, if they ever had one. Fuz also points out the possibility that the Neanderthal DNA samples may have been contaminated by modern human DNA despite the scientists’ extensive precautions.

Later in 2008, a reassessment of the gene by University of Chicago scientists appeared to support Fuz’s deduction.

“They concluded that the scenario proposed by the Max Planck workers—namely the human variant [of FOXP2] arose prior to the time that Neanderthal and human lineages diverged from a common ancestor—is inconsistent with the genetic patterns observed among modern humans.”

The Chicago team suggested that either FOXP2 appeared in Neanderthals due to interbreeding with humans (again, ew!) or the sample was contaminated accidentally through human handling. Fuz concludes, “It is really beginning to look like Neanderthals didn’t have language capacity after all.”

Archeological evidence also strongly suggests that Neanderthals neither possessed language nor were part of human lineage in any way. Certainly Neanderthals and other hominids used rudimentary tools and showed signs of a very elementary “culture,” such as the burying of their dead in shallow graves. Yet they made no advancement in technology and did not express themselves artistically. Only when humans arrived on the scene did history experience a “cultural big bang.” There was no gradual build up from the simplistic stone tools of the hominids to the sophisticated weaponry, jewelry, clothing, musical instruments, and artwork generated by the first humans.

Art, jewelry, and music in particular make humans stand apart from Neanderthals. These developments display an ability to communicate and think on abstract levels and an awareness of self. More importantly, artistic expression indicates a spiritual facet that animals, even “soulish” ones, lack entirely.

No doubt hominids were amazing animals, as are all of God’s creatures. But humans stand alone as the crown of creation. We’re the ones He made in His image, and we’re the ones He loved enough to die for.

Resources: If you want to learn more about hominids and Neanderthals and where they fit in with creation history, check out Fuz’s book Who Was Adam?, coauthored with RTB founder, Hugh Ross. Email questions for Fuz to ask@reasons.org and your query could end up being answered on the I Didn’t Know That! podcast.

Like Mr. Darcy of Jane Austen fame, I am an introvert. You’re more likely to find me curled up with a book or watching...
Human Origins & Anthropology

Lion Eats Man . . . and There’s Something Good to Say about It

Cat lovers beware! Your cute little feline that seems to smile as it eyeballs you each day may have lunch in mind. Scientists have...
Human Origins & Anthropology

It is one of the most iconic Christmas songs of all time. Written by Bob Wells and Mel Torme in the summer of 1945,...
Human Origins & Anthropology