Tonight marks the opening of the 2012 Olympic Games in London, England. The opening ceremony is one of my favorite events of the games. I love the pageantry and sense of camaraderie among athletes and countries. As the games progress, I get swept up 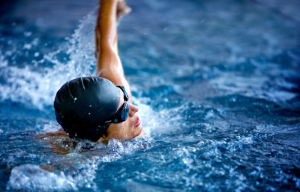 in the passion of competition, the athletes’ varied back stories, and the unexpected dramas that unfold throughout the event.

An event like the Olympics always brings to my mind the astounding differences between humans and animals. Although we share some similar biological characteristics, the animals are the physical gold-medalists for sure. Imagine Michael Phelps racing a bluefin tuna or a gymnastic team competing against high-flying monkeys.

Yet in many ways, particularly mental and behavioral, we humans leave critters in the dust. RTB philosopher/theologian Kenneth Samples writes:

For many people the distinction between human beings and animals has become increasingly blurred. Exposure to the secular, naturalistic worldview—especially in academia—can leave one wondering whether the differences are simply a matter of degree. In this view, mankind leaped to the top of the evolutionary heap by chance events.

However, philosophers have identified many ways in which human beings differ dramatically from animals. Unique human qualities and traits set man apart from the animals by kind, not just degree. From a Christian worldview perspective, and specifically in light of the imago Dei [image of God], one would expect profound differences…

RTB scholars report frequently on research into what makes humans unique among Earth’s creatures. But even we nonscientists can observe the distinctions. Take the Olympics as an example. An athlete who wishes to compete at this level does not simply take a random jog or two around the track. He learns the rules of his chosen sport, trains religiously, masters techniques, and strategizes ways to push himself ahead of the competition. Meanwhile, the Games’ hosts invest many hours planning the events, building stadiums, and envisioning logos and special ceremonies.

Such activities require precise knowledge (of anatomy or architecture), the foresight to plan for hypothetical scenarios and, most of all, a passion for the sport that drives and motivates. We do not see the same kind of behavior, or even the same capability, in animals.

Whichever country or athlete you root for during the London Games, I hope you’ll take a moment to reflect on the things that put humans in a league of their own.

Resources: Even the earliest humans showed signs of highly advanced behavior. Check out these articles and blogs for details.

A recent study carried out by an international team of researchers provides powerful evidence for the veracity of the biblical account of the descent...
Human Origins & Anthropology

DNA Comparisons between Humans and Chimps: A Response to the Venema Critique of the RTB Human Origins Model, Part 2

What is the best evidence for human evolution? For many biologists it’s the high degree of genetic similarity between humans and chimpanzees.
Human Origins & Anthropology