***Sandra and Maureen are taking a week off from blogging fun. They’ll be back to their usual schedule next week. In the meantime, please enjoy this guest post by RTB’s Dean of Online Learning (and former film reviewer) Krista Bontrager.***

In recent years, HISTORY has treated the Bible as a source for sensationalistic material, airing a steady stream of shows based usually on liberal scholarship. So it was with a fair bit of skepticism that I sat down to watch producer Mark Burnett’s miniseries The Bible. Yet the evangelical leaders supporting this project (not to mention the celebrity endorsements) made me hope for a pleasant surprise. Burnett (Survivor, The Apprentice, Shark Tank) and his wife, actress Roma Downey (Touched by an Angel), are the brains behind this project. Now that the series is three weeks in, I’d like to offer some brief comments.

Despite the absence of big-name Hollywood stars, the casting is solid. One of the film’s more memorable performances is the slovenly and downright gross King Herod.

The project’s production value (costumes, sets, scriptwriting, etc.) reflects an insiders’ knowledge of how to make a quality independent film. Even so, the film doesn’t quite reach “epic” Cecil B. DeMille proportions. Many of the “large crowd” scenes look as if they only hired about 200 extras. The director then tried to “cheat the shot” by using close-ups to make the scope look larger than it actually was. 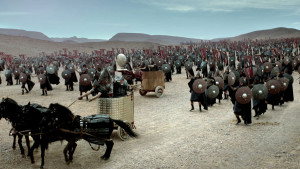 One of a handful of wide shots: Nebuchadnezzar invades Jerusalem. I believe many of these soldiers toward the back are digital enhancements, not extras. 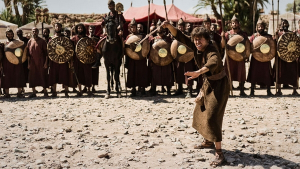 Most battle scenes looked more like this: medium wide-shots showing a few guys with spears and shields.

The film does a decent job of accurately portraying the brutal nature of the ancient world. Even between battle scenes and kings killing people at-will, there is a fair amount of sword fighting, stabbing, and gouging. Thankfully, most of the violence happens offscreen. Still, this series would likely receive at least a PG-13 rating if released in theatres. I even shut my eyes several times and am still undecided about whether to let my almost-14-year-old watch it.

Some Christians have pointed out departures from the biblical narrative. For example, in the scene where David prepares to slay Goliath, David doesn’t visit a stream to collect five smooth stones; he simply picks them up off the ground. Though this is a tiny departure from Scripture, I don’t see this as being a huge issue of concern.

Each episode is preceded by an explicit disclaimer stating that this intended to be an artistic rendering of the Scriptures—and as anyone familiar with Hollywood adaptations of books knows, there is a certain tension between staying true to the original story and translating that story to the big (or small) screen. Overall, however, I think the filmmakers have done a remarkable job of remaining faithful to the key historical facts.

If I had to name the series’ weakest link, I’d have to say the overall storytelling. Obviously, a significant amount of pruning is inevitable in the attempt to fit the Bible into a TV miniseries. Viewers see a steady stream of historical events, stitched together by periodic and brief voice-overs. The unfortunate result is a story arc that often feels disjointed and characters that often seem one-dimensional, as we watch them sweep across the screen one after the other.

Also, given HISTORY’s target audience, it’s no wonder the series never explains the “why” behind all the stories of the Bible. Although that would certainly have increased the program’s appeal to me, I realize that the HISTORY audience isn’t necessarily interested in those kinds of theological questions.

Overall, Burnett and Downey are to be commended for their efforts to bring the story of the Bible to primetime television. In an age when Christianity is being pushed further and further to the margins of society, watching The Bible is a refreshing change.

Is Allah a Loving God?

Does God need to be triune in order to be loving? If God possesses a diversity of personhood within the one divine essence (Trinity, from...
Theology