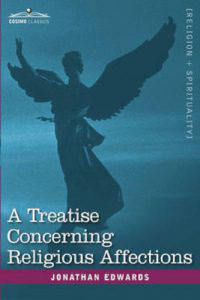 This week’s book, A Treatise concerning Religious Affections by Jonathan Edwards, is considered a classic Christian text as well a groundbreaking work in the field of psychology of religion. Edwards’s work seeks to provide criteria for evaluating the authenticity of Christian religious experience in light of the mass religious conversions that were taking place in the New England colonies during the First Great Awakening of the eighteenth century.

Jonathan Edwards (1703–1758) has been called America’s greatest philosophical theologian. Born in the American colonies, he became a central voice in the First Great Awakening and preached arguably the most famous sermon in Christian history, “Sinners in the Hands of an Angry God.” He was the first president of the college that would later become Princeton University. For more about him and his accomplishments, see my article “Christian Thinkers 101: A Crash Course on Jonathan Edwards.”

Jonathan Edwards’s A Treatise concerning Religious Affections developed a whole new field of academic study known as the “psychology of religion.” Personal religious experience is often what people appeal to most in order to argue that they have discovered God. Yet while religious experience is engaging, it is subjective in nature and may be caused by factors other than just an authentic encounter with the divine. There is also the challenge of people in non-Christian religions having similar religious experiences to that of Christians.

In light of the mass conversions to Christianity that were happening during the First Great Awakening (in the 1730s and 1740s) and how often those conversions involved overt religious experience, Edwards set out to discover how to discern this complex phenomenon. His book was intended to provide criteria for evaluating authentic Christian conversion experiences from those that were the result of mere hysteria or from other possible religious sources.

Written in 1746, Edwards’s work is divided into three major parts. He describes how an authentic conversion to Christ happens in a biblical context through regeneration via the Holy Spirit. He also notes how both emotion (the affections) and the intellect play critical roles in Christian conversion. Finally, he develops a list of twelve negative (inconclusive or false) signs of conversion and contrasts the negative list with what he calls the twelve signs of true religious conversion. The result is that Edwards provides a formidable biblical, philosophical, and psychological analysis of the profound phenomenon of religious experience.

Jonathan Edwards writes about what the affections reveal about the authenticity of a person’s religious experiences:

Edwards’s book is a timeless work because it combines the complex subject of the psychology of religion with critical theological and apologetics analysis. All Christians need help in discerning true religious experience from merely psychological experiences, or even help in contrasting the biblically correct from the spiritual counterfeit (see 1 John 4:1–3).

Edwards’s work doesn’t answer all questions about how to think Christianly about every type of religious experience, but it is definitely a masterful tool crafted by one of Christianity’s most distinctive thinkers and pastors.

How to Discern Education vs. Propaganda

There is a lot of discussion these days about things like fake news, yellow journalism, and political propaganda. There is also a lot of...
Education

Christian schoolteachers often ask us if Reasons Institute offers continuing education units that can be used toward a teaching credential. We’re happy to announce...
Education

Take Up and Read: Loving Wisdom