People who doubt religion and the supernatural typically think believers lack skepticism. In the minds of most atheists, Christians cannot sufficiently think through a religious claim unless they begin with cynical disbelief. Atheists often assert that extraordinary claims—like the supernatural—require extraordinary evidence in order to be justifiably believable.

One central leader of the early Christian church began his journey to faith with such incredulity. This man went from having deep misgivings and suspicions about Jesus and his grand religious claims to becoming a martyred witness of the resurrection. He was a family member of Jesus of Nazareth, his once skeptical brother, James. Let’s trace James’s truly amazing transformation in terms of how he came to view Jesus.

Before the Resurrection: James the Family Skeptic

The Gospels report that prior to the resurrection, Jesus’s brothers, like his neighbors, were highly critical of Jesus’s messianic claims (see Mark 6:3–4, John 7:5). In fact, Jesus’s family thought he suffered from mental delusion and sought to take control of him (Mark 3:21, 31–35). James, along with the rest of the family, had no faith in Jesus’s religious claims and in fact thought he was desperately ill. It would be hard to find greater skepticism than that of James. Not only was he embarrassed by Jesus’s claims but he was also concerned for his brother’s well-being. It appears that James was in no way a likely candidate for becoming an enthusiastic supporter of Jesus as Messiah. 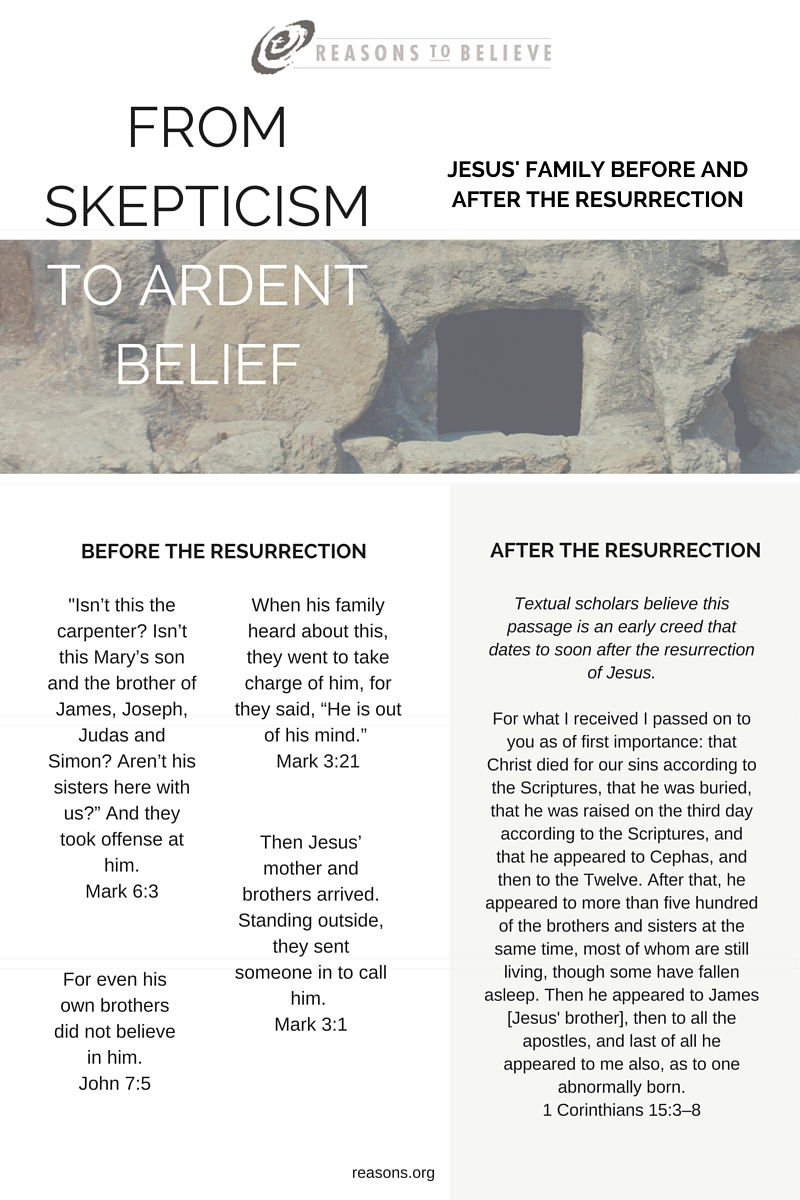 After the Resurrection: James the Courageous Witness

The early creed recorded in 1 Corinthians 15:3–8 that Paul had been given by the apostles (which included James) reported that Jesus had appeared in his resurrected state to his brother (1 Corinthians 15:7). James then became one of the most important leaders of the early Christian church along with the apostles Peter, John, and, subsequently, Paul. James authored one of the New Testament epistles and even held unique authority at the Jerusalem Council (Acts 15:12–21). Sources in church history report that James was later martyred for his belief in Jesus Christ.

So what accounts for James’s amazing transformation from embarrassment over his brother’s claims to church leader and eventual martyr? Christ’s resurrection seems to best account for this radical change. James saw his brother alive after his public execution and that event changed everything.

One very good reason for believing in the resurrection of Jesus Christ is the unique transformation of his apostles.1 And James, like the apostle Paul, went from hardcore skeptic to a zealous believer in Jesus Christ. James, and his extraordinary transformation via the resurrection, is thus an excellent example to bring up to nonbelievers who think the early Christians’ faith was credulous.

While skeptics sometimes accuse the apostles of being gullible, in fact, two of the central apostles (James and Paul) were initially extremely skeptical of Jesus’s claims. How does their initial tough-minded skepticism make their later faith commitments seem more viable and persuasive? Visit Reflections on WordPress to comment with your response.

What is one of the best ways to prepare for explaining and defending Christianity’s truth claims? I suggest that tapping into the wisdom of...
People

Why the Universe Is the Way It Is

In the best-selling science book of all time, author Stephen Hawking explains that no human is content until he or she has complete answers...
Theology

Is God Too Busy for Us?

Gift-giving, though a big part of the holiday season, can get mired in a lot of debate. But beneath all the hoopla, there’s something...
Theology