The last 25 years has brought a veritable flood of exoplanets. Some of those finds include Jupiter-class planets that take just a few days to complete an orbit. Others showcase Earth-sized planets orbiting stars emitting less than 5 percent of the sun’s light. Still others reveal stars with multiple planets orbiting 2–3 times more distant than Jupiter and having masses almost large enough to ignite nuclear fusion. The catalog of more than 3,000 exoplanets testifies to the remarkable technological achievements over the past two decades. However, as scientists continue to find potentially habitable planets, I find it worthwhile to remember what we actually know about planets outside the solar system.

Scientists use four main techniques to find exoplanets: radial velocity measurements, transit searches, gravitational lensing, and direct detection. Each technique has strengths and limitations, but all currently fall short of finding the necessary data to evaluate the true habitability of an exoplanet. Here is a brief rundown of each technique.

Currently, radial velocity searches have detected almost 700 planets, with more than 100 of those residing in multiplanet systems. The sensitivity of the technique grows as the planet mass increases or as the orbit size decreases. Both conditions cause larger motions in the host star. Although this technique ushered in the age of exoplanet discoveries, it yields little information about the host planet—namely, the minimum mass, the orbital parameters (distance to star, eccentricity, etc.), and the age (assumed to be the same as the host star’s age). Because radial velocity searches look at the shift in wavelengths of light, ground-based telescopes work just as well as spaceborne ones. However, current technology limits the technique’s sensitivity to planets larger than a few times the mass of Earth.

In 1999, astronomers began exploiting another way to find planets outside our solar system. If the plane of a distant planet system is aligned with Earth, then any planets might cross the disk of the star as they orbit. If so, astronomers would see a dimming of the light while the planet transits across the star. The sensitivity of this technique depends on the physical size of the star and planet. Jupiter would block out 1 percent of the light from the sun since it has a diameter one-tenth as large.

Just by using the transit technique, astronomers know the physical size of an exoplanet as well as its orbital parameters. Current technology allows astronomers to find planets as small or smaller than Earth in Earthlike orbits. Earth would block one ten-thousandth the light from the sun, so only telescopes in space achieve this sensitivity. The transit technique relies on the proper alignment of Earth, the exoplanet, and the star, so astronomers can only find a small fraction of the exoplanets that might exist. Often, radial velocity searches add the mass of the planet. Occasionally, astronomers get information from the exoplanet’s atmosphere as the transit begins and ends. So far, only Jupiter-like planets have yielded this atmospheric information.

Occasionally, a star and an associated planet will pass in front of a background star. For specific alignments, the star and planet gravitationally lens (enhance the view of) the background star, causing a brief but dramatic increase in detected light.

Of the roughly 50 planets detected by microlensing, a handful have masses and orbits similar to Earth. In fact, microlensing is one of the few techniques with the sensitivity to detect such planets. However, the chance nature of the method means that astronomers get only one shot at a detection. Additionally, the only information obtained from the planets is the mass and orbital parameters.

The direct detection method seeks to directly detect the light coming from an extrasolar planet. Because the light from the star dwarfs the planetary light, this technique currently detects only Jupiter-class planets orbiting relatively far (more than 10 times the Earth-Sun distance) from their host stars. However, the light from the planet carries much information about the planet size, temperature, orbit, and atmosphere. The planned Terrestrial Planet Finder mission seeks to directly image an Earthlike planet orbiting in the water habitable zone around a Sun-like star. 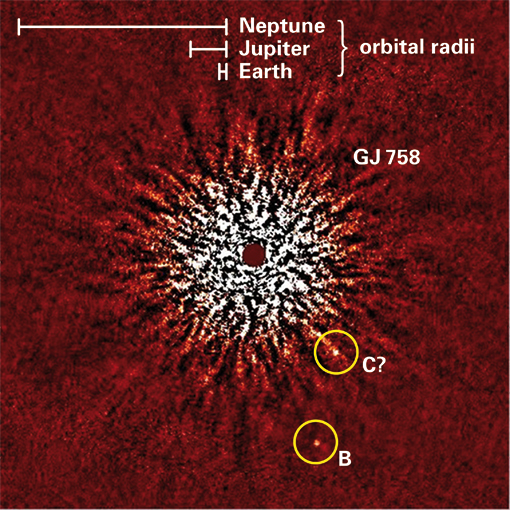 In my assessment, this method is the only one capable of actually answering whether or not a planet could truly host life. None of the other techniques give adequate information about the existence of liquid water on the surface or gases in the atmosphere indicative of microbial life. However, the technology to detect Earth-sized planets in Earthlike orbits requires another couple decades of development.

The last few decades have seen remarkable advances in our ability to find planets outside of our solar system. Scientists have found thousands of planets, with some residing in the region where liquid water could exist. Searches for exoplanets reveal abundant information about the mass, size, and orbital characteristics of the planets, but we still have a long way to go before we are able to determine whether a planet could truly host life, and more importantly, if life exists beyond the solar system.

Beginnings tell us a lot about children. A child's "firsts" inform us about his or her personality, development, and adult future. For these reasons...
Astronomy

Too much water, for example, or too much carbon would destroy Earth’s ability to support advanced life. On the other hand, too little of...
Geology & Earth