Predictably, the popular press was much more sensational and exuberant. Fox News referred to the finding as a “liquid water lake” and called the discovery a “Mars shocker” and a “game changer” in the search for alien life.3 Yahoo News UK announced that the MARSIS team discovered a “huge lake …of liquid water” and wrote that the discovery has “major implications for the chances of life surviving in Martian conditions.”4

What MARSIS Found
The peer-reviewed paper published in Science accurately states what the 22 planetary astronomers found and what they did not find. The team’s discovery resulted from several years of data collection by the MARSIS instrument onboard the European Space Agency’s Mars Express orbiter spacecraft (see figure). MARSIS sends strong pulses of radio waves to the Martian surface and records the echoes of the reflected radio waves. Some of the waves bounce off the Martian surface, but others penetrate to depths of up to 3 kilometers (1.9 miles). The penetrating waves are able to sensitively detect sharp transitions in the subterranean Martian layers, such as a transition from a rock layer to an ice layer or an ice layer to a liquid water layer. 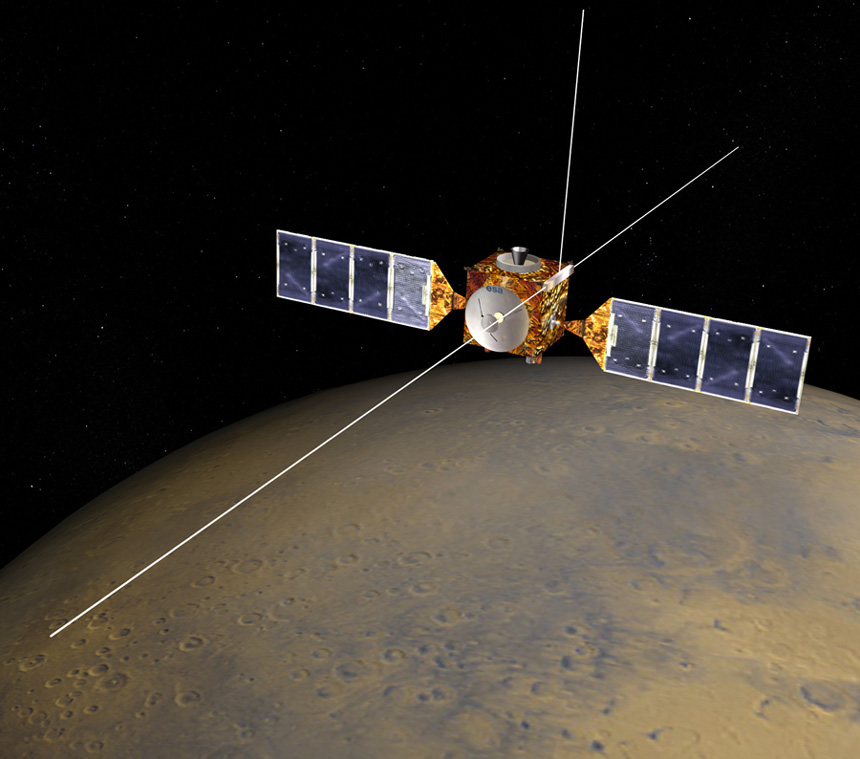 The 22 planetary astronomers saw in their analysis of the MARSIS data a small, very bright echo of the reflected radio waves under Mars’s south polar ice cap. It was offset by 9° from the Martian south pole. The brightness of the echo was higher than what would normally be reflected off ice, but consistent with the radar reflectivity of liquid water.

After reading the paper, I agree with the 22 planetary astronomers’ conclusion that they found strong, though not conclusive, evidence for a stable subterranean body of liquid water on Mars. As Jeffrey Plaut, a MARSIS principal investigator at the Jet Propulsion Laboratory who was not an author on the paper, stated in an interview, “I would say the interpretation is plausible, but it’s not quite a slam dunk yet.”5

The radar echoes did accurately establish the area, but not the depth, of the radar bright subterranean layer. The team reported “a well-defined, 20-kilometer-wide” body.6 The team was not able to determine the thickness of the layer, but lead author Roberto Orosei stated that it had to be more than just “a thin film.”7

Implications for Life
The team concluded that the likely liquid water layer was located right under a 1.5-kilometer-thickness of ice, which is the thickest part of the south polar ice cap. The pressure from 1.5 kilometers of ice raises the temperature of the likely liquid water layer to -68°Celsius (-90°Fahrenheit). For water to remain liquid at this very low temperature, the water must be saturated with perchlorate salts. This perchlorate saturation rules out any possibility of life surviving in the layer. As geophysicist David Stillman of Southwest Research Institute in Boulder, Colorado, stated in an interview, “If Martian life is like earth life, this is too cold and too salty.”8

The determination that the radar bright subterranean layer must be a saturated perchlorate brine led the team of 22 planetary astronomers to draw two different possible conclusions about the nature of the layer. They wrote, “The brine could be mixed with basal soils to form a sludge or could lie on top of the basal material to form localized brine pools.”9

The MARSIS discovery is not a big freshwater lake, as some internet reports implied. Nor is the discovered layer a possible habitat for life. However, if indeed the layer is saturated with perchlorate salts, it is highly probable that it is a site with at least a small quantity of stable liquid water. As our book Origins of Life10 explains in much detail, while liquid water is a requirement for life, it is very far from a guarantee of life.

Design of Rate of Remineralization of Organics

American marine biologists have found a new design feature for sustaining advanced life on Earth. They discovered that the rate of remineralization of particulate...
Design

Edgar Allan Poe was not the only one impressed with the great intellect of the raven. Ravens also much impressed the prophet Elijah when...
Evolution