How do you get to a planet orbiting another star? The Millennium Falcon would simply make a jump to light speed. Although creators of the Star Wars universe never really explain how this works, it seems to depend on entering some hyperspace beyond the usual three spatial dimensions of our universe. Similarly, the crew of Star Trek’s Enterprise would plot a course and engage the warp drives. By warping the space around the ship, the Enterprise could travel great distances in short times without violating the law that nothing travels through space faster than the speed of light. Wormholes also provide great opportunities to either explore distant worlds or contact aliens. Clearly, life moves around the galaxy (and even the universe) in science fiction, but can life move beyond the solar system here in the real world?

The Scale of the Problem

In 1977, NASA launched one of its most famous space probes, Voyager 1. Over the next three years, the satellite took the most detailed photographs then available of Jupiter and Saturn and their moons. The trajectory by Saturn’s moon Titan flung the spacecraft out of the plane of the solar system and off towards interstellar space. Nearly a decade later, Voyager 1 had flown farther away from the sun than Neptune. Engineers pointed the satellite’s cameras back toward the inner solar system and snapped a final set of pictures, including the one popularized by Carl Sagan showing Earth as a pale blue dot. Voyager 1 crossed one final milestone in 2012 when it reached the boundary where solar wind no longer dominates the winds from other stars. Voyager 1 had traveled more than 121 astronomical units (or 11 billion miles) to finally reach interstellar space. Aside from showcasing the impressive ingenuity of scientists and engineers, the journey of the Voyager 1 probe also helps demonstrate the problem of interstellar travel. 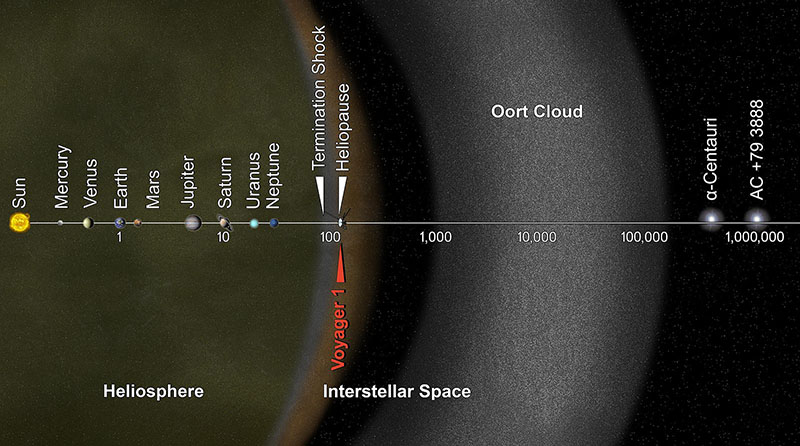 Voyager 1 still holds the record as the spacecraft that moved away from the sun the fastest. It took 35 years to reach interstellar space, traveling at 11 miles per second (almost 38,000 mph) for most of that time. Even though Voyager 1 covered the distance from Earth to the sun in about three months, it will take 80,000 years to cover the distance between the sun and the nearest star (Alpha Centauri)! Voyager 1 isn’t headed toward Alpha Centauri, but in 40,000 years it will pass within 1.6 light-years of a star (AC+79 3888, a.k.a. Gliese 445) that is rapidly moving toward the sun. At that time, Voyager 1 will be closer to Gliese 445 than the sun. Clearly, our current technology won’t get us beyond the confines of the solar system, but will future advances get us there?

Can Future Technology Reduce the Timescales?

In order to reduce the travel times, we must reach something close to the speed of light. The usual numbers thrown around as possible travel speeds often range from 10 to 20 percent of the speed of light. Who knows what kind of technology such speeds might require, but physics constrains some of the factors.

Traveling at faster speeds requires larger amounts of energy, but the increase in speed does not grow in the same way as the increase in energy. For the slower speeds of everyday life and even the Voyager 1 craft, the amount of energy required to increase speed grows much faster than the speed does. Physics tells us that the energy associated with the movement, or kinetic energy, of an object (assuming no rotation) is KE = ½ m*v2, where m is the mass of the object and v is the speed. Consider playing catch with a baseball. Baseballs have a mass of 0.145 kilograms (physicists do these calculations in SI units of kilograms, meters, and seconds). When I play catch with my kids, I typically throw the ball with speeds around 13 m/s (around 30 mph). So, the baseball has a kinetic energy of KE = ½*0.145*132 = 12.3 joules. The same baseball thrown by a major league pitcher achieves speeds in excess of 44 m/s (98 mph). At these speeds, the ball has a kinetic energy of 140.4 joules. Tripling the speed increased the kinetic energy by a factor of 10. If the baseball now moves at one-tenth the speed of light (30,000,000 m/s), it has a kinetic energy of 65,000,000,000,000 joules.

For a spacecraft like New Horizons moving with the same speed and having a mass of 500 kg, the kinetic energy grows to 226 x 1015 joules. In comparison, each year the entire United States only uses 400 times more energy than this. It would take more than 35 million tons of oil to produce this amount of energy or 225 kilograms of hydrogen to produce this much energy, assuming 100 percent efficiency. Burning oil clearly requires too much weight in fuel. Having a mechanism that extracts the energy from fusing hydrogen into helium offers the potential to have a spacecraft where the mass of fuel is similar to the mass of the cargo. Of course, this assumes that humanity develops the capacity to operate fusion reactions and that we can extract the energy from those reactions with incredibly high efficiency. Even with all these caveats, travel to the nearest star would still take more than 40 years (4.2 light-years traveling at one-tenth the speed of light). Increasing the speed any further would dramatically increase the fuel mass.

Traveling near the speed of light poses other problems though. Just as accelerating a craft to those speeds requires enormous amounts of energy, colliding with the debris scattered throughout interstellar space would cause tremendous damage. Space is pretty empty on average, but a journey to a neighboring star would cover a lot of space. At one-tenth the speed of light, hitting a grain of sand would impart almost 1 billion joules of energy as it rips through the hull of the spacecraft (compare that with 140 joules for a ball thrown by a major league pitcher). Even with the low density of interstellar space (anywhere from 100 to 1 trillion molecules per cubic meter), a spacecraft traveling to a nearby star basically embarks on a long game of Russian roulette. A trip through only low-density regions of interstellar space has a pretty low probability of hitting a grain of sand that would likely destroy the craft. Trajectories through higher density regions increase the chances of impact by more than a billion.

The laws of physics put some pretty serious constraints on the prospect of interstellar travel. In the distant future, humanity may engineer a craft that could overcome all these difficulties, but not anytime soon. For now, interstellar travel remains in the realm of science fiction only.

An already impressive body of evidence demonstrates the fine-tuning Earth exhibits to support life. Yet continued investigation of our neighboring planets––including water on Mars––adds...
Geology & Earth

The Milky Way: An Exceptional Galaxy