Water is probably the most studied molecule in history—yet we continue to uncover more evidence that it is highly designed to support life. In part 6 of this series, guest writers John Millam, Ken Klos, and Iain D. Sommerville examine the remarkable properties of water that help hold cells together, water plants, and pump blood.

“Water is the most extraordinary substance! Practically all its properties are anomalous, which enabled life to use it as building material for its machinery. Life is water dancing to the tune of solids.” Albert Szent-Györgyi

In this series we’ve explored water’s amazing properties and their role in sustaining life. In previous segments we reported that:

• Water is the “universal solvent” (part 1). Life requires that water be able to serve as a medium in which cellular processes can occur.
• Water has high melting and boiling points (part 2). These characteristics enable water to remain a liquid at room temperature.
• Water expands upon freezing (part 3). Therefore, ice floats on water, insulating and protecting lakes, rivers, and oceans from freezing solid.
• Water possesses extraordinary thermal properties (parts 4 and 5). These features play essential roles in maintaining a stable global climate, protecting cells from heat damage, and establishing the water cycle.

Today, we will examine the remaining exotic capabilities of water.

Of all common liquids, water has one of the highest surface tensions.1 Surface tension refers to a liquid surface’s ability to resist an external force. A sufficiently strong surface tension sometimes allows more dense objects—which would normally sink—to rest on the liquid’s unbroken surface. A water strider can literally walk and run on the water’s surface (figure 1) because water’s surface tension is stronger than the gravity pulling the bug downward. Surface tension results from cohesion (attraction between similar molecules) which, in water’s case, is due primarily to its strong hydrogen bonding (see part 2). 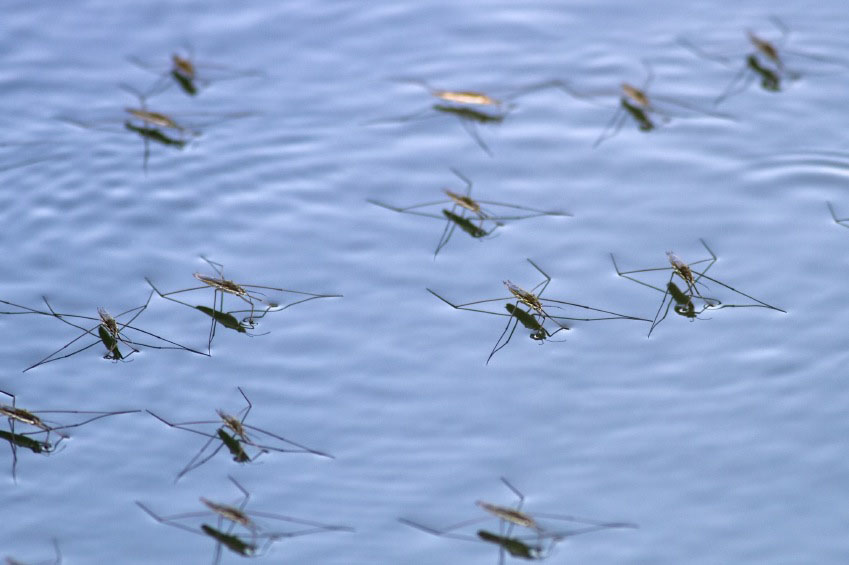 Figure 1: Water striders resting on the surface of water.

Surface tension is also the driving force behind adsorption, in which certain dissolved substances will stick to a surface rather than float freely in the solvent. This occurs for substances that lower the solvent’s surface tension, thus making it energetically more favorable to remain at the solvent surface. For example, most proteins and similar biomolecules can lower surface tension, which causes them to aggregate onto and ultimately incorporate into cell membranes. This phenomenon is critical for forming organized cell membranes.2

Water’s high surface tension combined with the strong interactions (known as adhesion) between water and most surfaces (such as glass, wood, stone, and metal) leads to capillary action. Another critical phenomenon, capillary action means that a liquid will be drawn into narrow spaces without assistance from an external force. This can even result in a liquid being drawn spontaneously upward—against gravity. The wicking effect produced by capillary action can be observed when we place the tip of a piece of paper in water—the water will be drawn up slowly between the paper’s fibers.

For terrestrial plants, efficient capillary action is essential. For example, capillary action draws water to where plant roots can reach it. In soil, water can rise as much as four to five feet due to capillary action; whereas if water were like most liquids it would rise only two or three feet.3 Vascular plants, including trees,4 rely on capillary action to draw water up from the roots all the way to the branches and leaves. This is critical for the transportation of vital nutrients throughout plants and for the replacement of water lost through transpiration (evaporation from the leaves). Water’s efficient capillary action makes this process effortless; otherwise plants would likely require some form of circulatory system to pump sap upward. Such a requirement would be both biologically “expensive” and complicated. In other words, without water’s capillary action, tall vascular plants would almost certainly be impossible.5

Strong capillary action also draws water into the pores and cracks of rocks; thus, dissolving the salts and minerals within (see part 1 for more on water’s strong salvation ability). Water is then able to extract these minerals and redistribute them, making them available for the nourishment of plants and animals. If the water freezes while inside these cracks, its expansion will cause the rock to fracture even more (see part 3), thereby assisting in erosion, which is critical for soil formation.

Viscosity, the measure of a substance’s resistance to flowing, varies dramatically from one liquid to another; and water has one of the lowest viscosities of all liquids.6 For example, tar’s viscosity is approximately 30 million times higher than water’s.7Substances with high viscosities like honey or molasses (each about 10,000 times more viscous than water) pour very slowly.

Water’s viscosity is precisely in the range needed for life. If its viscosity was too high (like molasses’), then it would impede blood circulation. Even a slightly higher viscosity would significantly increase the amount of energy needed to pump blood. Similar problems would occur within cells because a higher viscosity would hinder the movement of the large biological molecules and organelles required for cellular processes. A higher viscosity also creates more resistance for aquatic life to fight against while swimming, thus costing more energy.

A modest viscosity helps a cell maintain its shape, protecting it against sheering forces. If water’s already low viscosity were lower, external shocks and stresses would cause greater disruption to the cell.8 So for a liquid to serve as an effective medium for cells, its viscosity must be just right—neither too high nor too low. Water’s viscosity fits the bill perfectly.

It turns out that the viscosity of solid ice must also be within a critical range.9 As it is, snow and ice near the poles accumulate into glaciers pliable enough to flow downward over time. These glaciers have played a key role in carving valleys and crushing rock into powder (which releases vital minerals into the environment). If ice’s viscosity were too low, then ice would flow easily over land rather than transforming it. If ice’s viscosity were too high, water would accumulate at the poles as ice—depriving the world of much-needed liquid water. Even a modest increase in ice’s viscosity would increase glacier size (glaciers currently hold about 1.7 percent of Earth’s water), thus reducing the planet’s amount of liquid water. Rain levels would drop and the global temperature would change more quickly (see part 4). Fortunately for life on Earth, the viscosity of ice is fine-tuned to meet the needs of the planet and its inhabitants.

Diffusion is viscosity’s flip side; it represents how quickly molecules spread out in a solvent. Imagine placing a drop of black ink in a glass of water. Initially, the ink drop would start in one place, then spread out gradually until distributed uniformly throughout the water. A substance’s rate of diffusion is inversely proportional to its viscosity; which means water has a remarkably high rate of diffusion.

Diffusion is particularly critical in cells.10 For example, typically within as little as a hundredth of a second, diffusion spreads oxygen throughout the cell interior, thus making it available for cellular processes. The same process makes the cell’s importation of vital nutrients and the elimination of waste material efficient. This means simple unicellular life can exist by diffusion alone without requiring a circulatory system.

A complete discussion of the fine-tuned aspects of water’s diffusion rate can be found in Nature’s Destiny by Michael Denton.11 We will summarize two of his observations here. First, without water’s high diffusion rate, capillaries in animals would be unable to deliver oxygen and nutrients to cells effectively. Second, blood (water containing red blood cells and other components) is a non-Newtonian fluid, meaning its viscosity decreases with pressure. So, when the heart beats faster, blood’s viscosity drops—making it easier for the heart to pump.12 This behavior is critical for an efficient circulatory system in mammals.

Water is probably the most studied molecule in history—yet we continue to uncover more evidence that it is highly designed to support life. This design even extends to the quantum level, as demonstrated by a recent discovery.

Scientists have long known that the Heisenberg uncertainty principle of quantum mechanics would destabilized water molecules by making the distance between individual molecules more variable. This would stretch the hydrogen bonding distance and greatly reduce the strength of this interaction. Such an event would dramatically reduce or eliminate virtually all of water’s exceptional properties and make life impossible within the universe.

However, counterbalancing by another quantum effect averts this negative outcome. By applying the uncertainty principle to water’s oxygen-hydrogen bonds and to the angle between the three atoms, the dipole interaction is strengthened and safely offsets the loss in hydrogen bonding.13 Although theoreticians predicted this solution, only recently have experimental measurements confirmed it.14 Commenting on this important discovery, Lisa Grossman reports, “Water’s life-giving properties exist on a knife-edge. It turns out that life as we know it relies on a fortuitous, but incredibly delicate, balance of quantum forces.”15 She further concludes that, “We are used to the idea that the cosmos’s physical constants are fine-tuned for life. Now it seems water’s quantum forces can be added to this ‘just right’ list.”

It would take volumes and volumes to do justice to the topic of water’s unique properties. In the end, we can only conclude that Szent-Györgyi said it best when he declared that “life is water dancing to the tune of solids.”

To conclude this series, we will discuss the amazing abundance of liquid water on Earth and its absence elsewhere.

A team of international scientists has uncovered an unlikely tool for understanding the onset of Earth’s geodynamo (the mechanism producing Earth’s magnetic field). Since...
Geology & Earth

Earth's assortment of elements and compounds distinguishes it from other more "ordinary" planets.
Geology & Earth

The Day Earth Burped and How It Saved Humanity