“Houston, we’ve had a problem.”

Commander Jim Lovell’s famous, though often misquoted,1 words mark the epic struggle of the disabled Apollo 13 mission, called a “successful failure” because while the three-man crew never reached the Moon, they did return to Earth safe and sound.

Following his now-iconic statement, Lovell described their situation to NASA’s ground control, “We’ve had a MAIN B BUS UNDERVOLT.”2 In electrical jargon, “bus” is short for “bus bar,” a large metal conductor that receives power from electrical sources and serves as a distribution point to individual devices or circuits. The circuit breaker panel in your house is also an electrical bus.

Losing power at home does not typically lead to catastrophic results, but when you’re on the way to the Moon you want significant redundancy so that you have multiple power sources and even multiple distribution mechanisms (see figure 1). As Commander Lovell observed, one of the two main electrical distribution systems aboard Odyssey (Apollo 13’s Command Module) showed decreasing amperage. Later the astronauts saw the same thing happen in Main Bus A.

Figure 1. A simplified schematic of the type of power supply redundancy needed on a spacecraft
Image credit: Eddy del Rio

Obviously, a good engineer will take the need for redundant power distribution into account. We see evidence of such thoughtful design in our own bodies.

In the human body, the heart serves as the single power source and the blood stream that delivers oxygen and glucose represents power itself. Serving as our bus bar is the aorta. Just like the electrical box in your home, this vessel feeds the body indirectly via the major arteries that arise from it. Of all the places to which blood is delivered, the brain is likely the most important. But where is the redundancy in the delivery of such important support to the brain? Fortunately, we have an auxiliary blood bus in the form of the cerebral arterial circle, also known as the Circle of Willis (CW), named after English physician Thomas Willis (see figure 2). 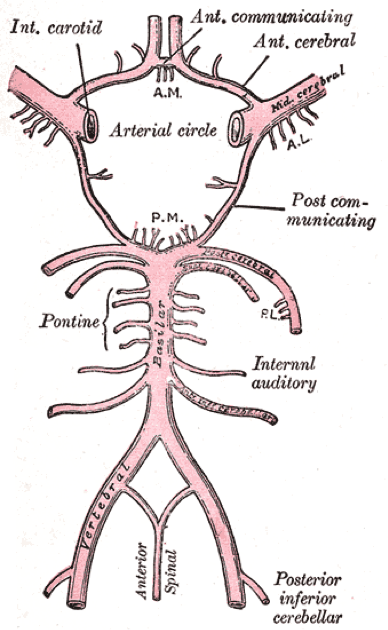 This feature is a ring-shaped artery at the base of the brain. It receives blood from the heart through the aorta by four pathways. The arteries that feed the CW are the left and right internal carotid arteries and the left and right vertebral arteries (the latter two join just prior to the CW in a single large caliber artery called the basilar artery). The CW then serves as a pressurized blood reservoir from which arise several bilateral (left and right) arteries that deliver blood to the brain. These include the posterior cerebral, middle cerebral, and anterior cerebral arteries, plus their many branches. The basilar artery itself, which connects directly to the CW, also delivers blood bilaterally (left and right) to the anterior inferior cerebellar arteries, the labyrinthine (internal acoustic) arteries, several basilar and pontine arteries, and the superior cerebellar arteries (see figure 3).

Figure 3. This schematic demonstrates the network of arteries supplying the brain with blood. Note that the crossing lines do not represent intersections.
Image credit: Eddy del Rio

As you can see, there are many redundant routes for delivering blood to our most important “device.” Engineers will immediately appreciate the design aspects. And just as the design of an Apollo Command Module’s power distribution system demonstrated intelligence and forethought, I’d argue that so too does the cerebral arterial circle!

Dr. Eddy M. del Rio received his MD from Saint Louis University in 2004, and currently serves as a practicing physician for the Veterans Health Administration in the greater Springfield, MO region.

Encountering the Fossils of the Burgess Shale

Last summer’s hike to the Mount Stephen Fossil Beds—located in the Canadian Rockies of British Columbia—was a “bucket list” experience for me. This UNESCO...
Design