Two researchers have demonstrated that DNA harbors information in both digital and analog formats. These two types of information appear to be coupled intrinsically through DNA nucleotide sequences to form an irreducibly complex system. This new insight reveals the elegant sophistication of genomes and advances the case for intelligent design by highlighting the remarkable analogy between the structure and operation of biochemical information systems and the information systems produced by human designers.

Though this is an age of digital downloads and music subscription services, the popularity of vinyl records is actually on the rise.

This surprising comeback is thanks, in part, to vinyl’s analog nature. Some audiophiles claim the continuous waveforms cut into the grooves of a record provide a richer, more dynamic sound than the digitized music housed on CDs and in MP3 files (or MP4 files, for all you Apple users). Other music enthusiasts aren’t so sure. Instead, they laud the sound quality of digital recordings. The reality is that both formats have their strengths and limitations. At the end of the day, one’s preference is probably more subjective than anything else.

But the discussion about digital and analog formats isn’t limited to music recordings. Recently, researchers Georgi Muskhelishvili and Andrew Travers pointed out that the information harbored in DNA shows both digital and analog characteristics.1 Instead of debating the superiority of either format, however, these scientists demonstrated that the two types of information work together to enable effective gene expression. Their insight provides an important new way for biochemists to think about the organizational complexity of genomes. It also highlights the elegant sophistication of biochemical systems, thus furthering the case for intelligent design.

Digital and Analog Information in DNA

The cell doesn’t need every protein encoded in its genome all the time. Sometimes genes are expressed (and the corresponding proteins are produced), and other times they aren’t. That is, the digital information in a gene can be expressed or not. To say it another way, the gene is a discontinuous entity that adheres to the “on-off” logic characteristic of digital information.

Most people recognize DNA’s iconic double helical structure, but what may not be well known is that the DNA double helix can adopt a variety of higher order shapes. One of the most prevalent architectures is referred to as a supercoil. The image below depicts the supercoiling of a typical bacterial genome. (In bacteria, the ends of the double helix link together to form a circular piece of DNA.) 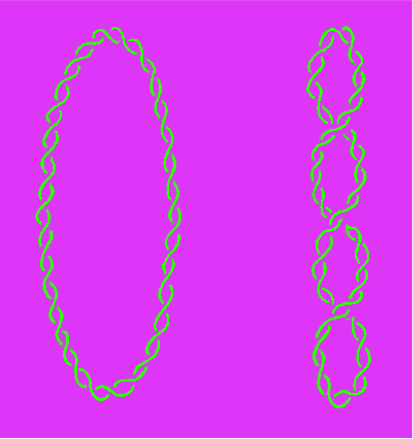 Supercoiling of DNA can be described by a number of parameters: (1) positive or negative; (2) twist; and (3) writhe. These parameters vary continuously, just like the grooves cut into a vinyl LP. In other words, supercoiling is an analog property.

Biochemists have come to realize that the higher order structures of DNA, and hence the analog information, play a significant role in gene expression, with the degree of supercoiling influencing the extent of gene expression.

The Interplay between DNA’s Digital and Analog Information

They also note that proteins that interact with the genome aid in the coupling of digital and analog information. Proteins bind to specific nucleotide sequences. Once bound, these biomolecules help to promote supercoiling and stabilize higher order architectures. In other cases, bound proteins relax the supercoiling or destabilize the double helix. In other words, proteins play a role in regulating the expression of the digital information in the genome through the analog component.

The implications of this insight may be far reaching. Muskhelishvilli and Travers argue that it requires a new, more holistic strategy for studying gene expression, as opposed to the traditional approaches that treat gene regulation separately from the information found in the genes.

Information and the Case for Intelligent Design

The implications of this insight are also far reaching when it comes to the biochemical case for intelligent design. In The Cell’s Design I describe numerous ways in which the structure and operation of biomolecules and biochemical systems parallel human designs. I argue that these close similarities logically compel the conclusion that life’s most fundamental processes and structures stem from the work of an intelligent Agent.

Roughly 30 percent of all newly synthesized proteins must be degraded (broken down) by the cell immediately after formation because they are improperly made.1...
Biochemistry

Evidence That the Cell’s Metabolism Is Planned

I have lived in the Los Angeles area for over two decades, but I am still a small-town boy at heart. Growing up in West...
Biochemistry

Get Smart about Synthetic Spider Silks