The most elaborate birthday celebration I ever had was the one that our Reasons to Believe staff organized for my 60th birthday. I was expecting just a token nod for having completed 60 trips around the sun. Instead, I was feted by 60 guests for several hours. The most generous comment of the night was that I had finally attained middle age since I had reached half of the biblical limit on the human life span (Genesis 6:3).

For us humans, middle age has its benefits. The first several decades of life permit one to accumulate the knowledge, wisdom, and character maturity needed to live a stable, productive, and fulfilled life. Consequently, it is also the time window in our lives when our income is typically at its highest and we have the greatest opportunity to invest in the things that matter most to us. It is also the time window during which the ubiquitous law of decay—the second law of thermodynamics described in Romans 8:18–23 and in the book of Ecclesiastes—has not taken such a toll on our physical bodies and minds that we cannot do nearly all of the physical and mental activities that we pursued in our youth.

I hope one day to gather into one book all of the latest scientific reasons and explanations for why virtually every component of the natural realm must be middle-aged for humans to exist and thrive. This being a blog article, I will restrict myself to briefly summarizing why our star, the sun, must be perfectly middle-aged.

Young stars are not sufficiently collapsed to ignite nuclear burning. Old stars have exhausted their nuclear fuel. Only stars that are broadly middle-aged experience nuclear burning. A nuclear-burning host star is essential for sustaining any kind of advanced life, since only such a star provides the heat, light, and spectral response that such life requires.

All nuclear-burning stars exhibit flares (explosions on the stellar surface ignited by the release of intense magnetic energy built up near star spots). The radiation from stellar flares, if they are powerful and frequent, is deadly for life, especially advanced life. Stars both larger and smaller than the sun manifest much more intense and frequent flaring activity. 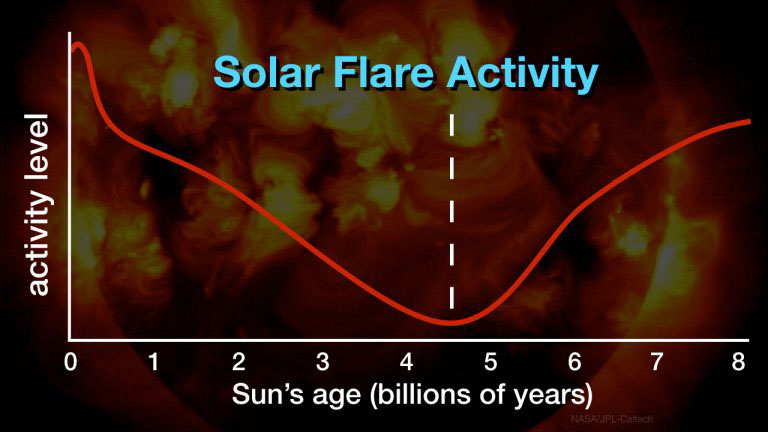 Flaring activity levels in the sun’s past and future were and will be thousands to millions of times greater than at present. In fact, only at the present epoch is the sun’s flaring activity and ultraviolet and X-ray radiation sufficiently low enough to permit the existence of humans and human civilization.

Middle age for humans lasts about a third to one-half of a human’s typical life span. Currently, the sun is almost exactly halfway through its nuclear burning phase. Indeed, the sun cannot depart from being close to exactly middle-aged because otherwise it wouldn’t have low enough flaring activity to permit the existence of human civilization.

The fine-tuning of the sun’s age to make possible the existence of humans enjoying global civilization on Earth is much more exquisite than ±1 percent of the sun’s 9-billion-year nuclear burning capability. Physicists discovered this much more fine-tuned age design thanks to observations of neutrinos emitted by the sun.

The nuclear furnace at the sun’s core emits both photons and neutrinos. It takes slightly more than 100,000 years for the photons to reach the sun’s surface, whereas the neutrinos get there in just 2.4 seconds. Through observations made recently with an upgraded neutrino telescope in Italy, physicists determined that unlike previous epochs in the sun’s history, the sun has been in strict thermodynamic equilibrium throughout the past 100,000 years.1 Neutrinos detected by the Sudbury Neutrino Observatory in Ontario, Canada, revealed that the sun became extremely stable in its luminosity beginning about 50,000 years ago and that this extreme luminosity stability will be sustained for at most another 50,000 years.2 This very brief era of extreme solar luminosity stability is a requirement for a global, technologically advanced civilization.

The sun’s age, therefore, must be fine-tuned to within ±0.005 percent of the sun’s 9-billion-year nuclear burning capability for human civilization to be possible! Why did God choose the date that he did for the creation of Adam and Eve? The need for the sun to be precisely middle-aged is one of a large number of scientific reasons why he did. On Thanksgiving Day, I encourage all of you to thank God for placing us here on Earth at the optimal solar moment.

Studies of aluminum (26Al) production in the Milky Way Galaxy provide additional support for RTB’s creation model and the fine-tuning it predicts. Aluminum is...
Astronomy

Researchers have affirmed a feature of the biblical big bang creation model and denied a specific criticism from young-earth proponents. Two different teams of...
Astronomy

The oxygen-antioxidant paradox seriously challenges all naturalistic models attempting to explain the history of life on Earth. Consequently, confirming its validity would do much...
Chemistry