Considerable political and scientific discussion today concerns the possible effects of global warming. Not much attention, however, has been given to potential future water loss—in other words, death by drying out. A major reason why Earth’s water loss has not been publicized is due to large uncertainties in water loss models. A recent paper in the Astrophysical Journal has now brought a measure of certainty to Earth’s inevitable future water loss.1 Is there reason to worry?

Rising Carbon Dioxide Levels
During the past 70 years the global mean temperature has risen by 1°C (see figure 1). There are several causes for this rise, but atmospheric carbon dioxide ranks as the most significant. Carbon dioxide is a greenhouse gas and the more there is of it in the atmosphere, the more the atmosphere traps heat from the Sun. 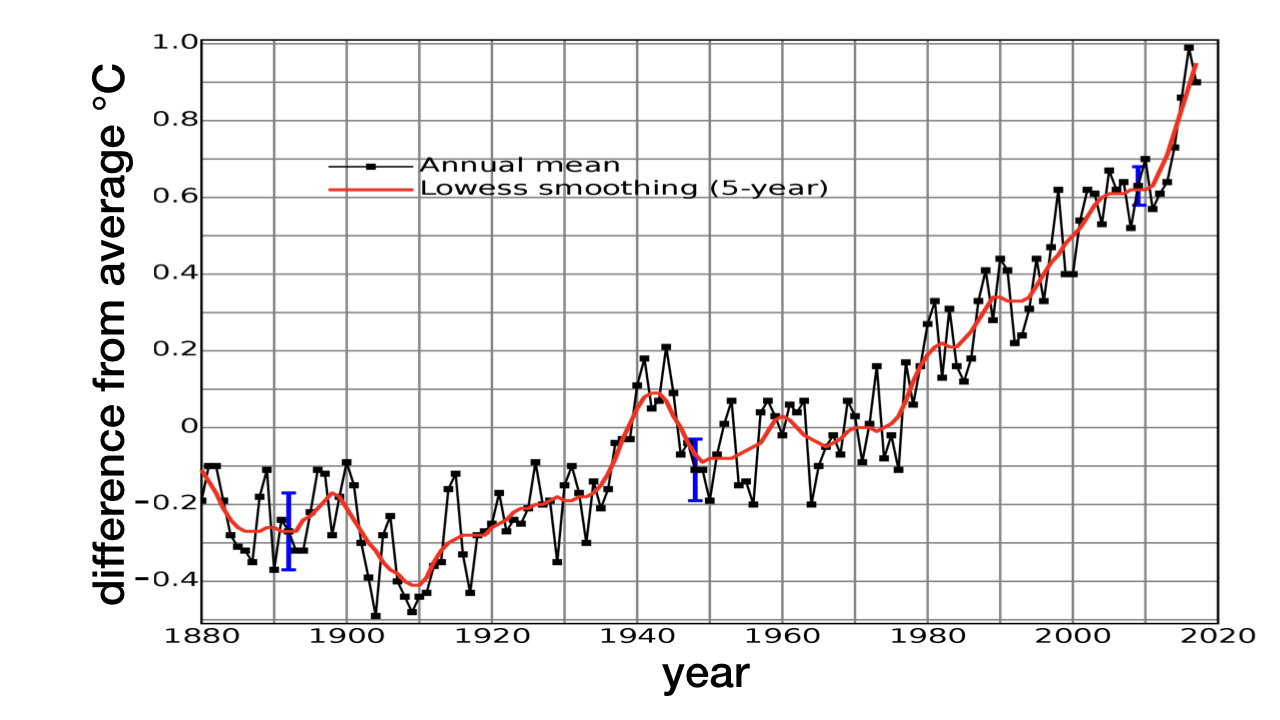 Photosynthesis, the base of the food chain, operates by drawing carbon dioxide from the atmosphere and combining it with water to make sugars, starches, and fats. At 180 parts per million of carbon dioxide in the atmosphere, photosynthesis is seriously degraded. At that level, food crop yields plummet. Food production sufficient to sustain humans and their domesticated animals requires a minimum carbon dioxide level of 200 parts per million. At that level, food crop growth would be limited to elevations near sea level.

Cornell University astronomer Illeana Gómez-Leal and her colleagues examined the consequences of atmospheric carbon dioxide levels at and above 200 parts per million in the context of the ever-brightening Sun. Ever since it ignited hydrogen fusion in its nuclear furnace, the Sun has been getting progressively brighter (see figure 2). 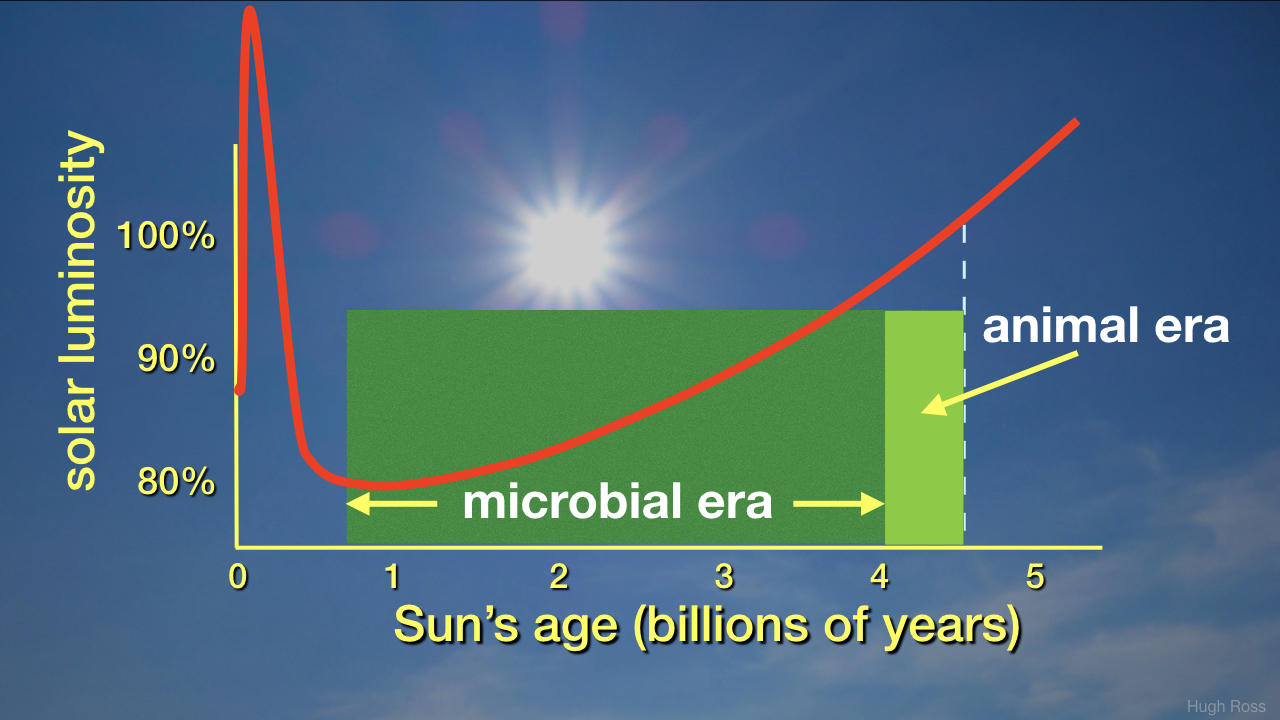 Figure 2: Sun’s Luminosity History
During its formation, the Sun quickly accumulates mass and brightens dramatically. It then loses mass and dims prior to 1 billion years in age. When hydrogen fusion burning begins in the Sun’s core, the Sun’s rate of mass loss drops to a minuscule level. The ignition of hydrogen fusion into helium causes the Sun’s core density to gradually rise. This increasing core density causes the Sun’s nuclear furnace to burn more efficiently, which results in the Sun gradually brightening. Diagram credit: Hugh Ross

Since the origin of life on Earth 3.8 billion years ago, the Sun’s luminosity has increased by about 20 percent. We are now in an epoch where the increase in the Sun’s luminosity is accelerating. Four billion years from now the Sun will be so large and so bright that it will incinerate and vaporize Earth. However, long before the Sun brightens sufficiently to vaporize Earth, the moist greenhouse threshold will be reached.

Gómez-Leal’s team determined when, in the context of the ongoing brightening of the Sun, the MGT will occur. They calculated that for atmospheric carbon dioxide levels above 200 parts per million, the MGT will be reached when Earth’s average surface temperature rises to 47°C (117°F). That temperature is just 30°C (54°F) warmer than Earth’s present temperature of 17°C (63°F).

Earth’s average surface temperature for atmospheric carbon dioxide levels above 200 parts per million will reach 47°C when the Sun’s total irradiance (energy) increases by 1.5 percent.4 The 1.5 percent figure assumes Earth retains its present covering of ice and snow. But all of Earth’s surface ice and snow will melt when Earth’s global mean surface temperature reaches 21°C (70°F); 4°C (7°F ) warmer than now. The disappearance of Earth’s ice and snow will dramatically lower Earth’s albedo (reflectivity) and immediately raise Earth’s surface temperature by 13°C (23°F).5 Consequently, a solar irradiance increase of just 1.1 percent is enough to bring on the MGT.

Figure 3 shows that the MGT will occur just a few tens of millions of years from now—even faster at higher atmospheric carbon dioxide levels. However, the MGT marks only the beginning of Earth’s desiccation. Earth will not become “bone dry” for another 2.8 billion years.6 Nevertheless, it takes only a slight loss of surface water for advanced life on Earth to be driven to extinction. Human civilization will be the first to go. 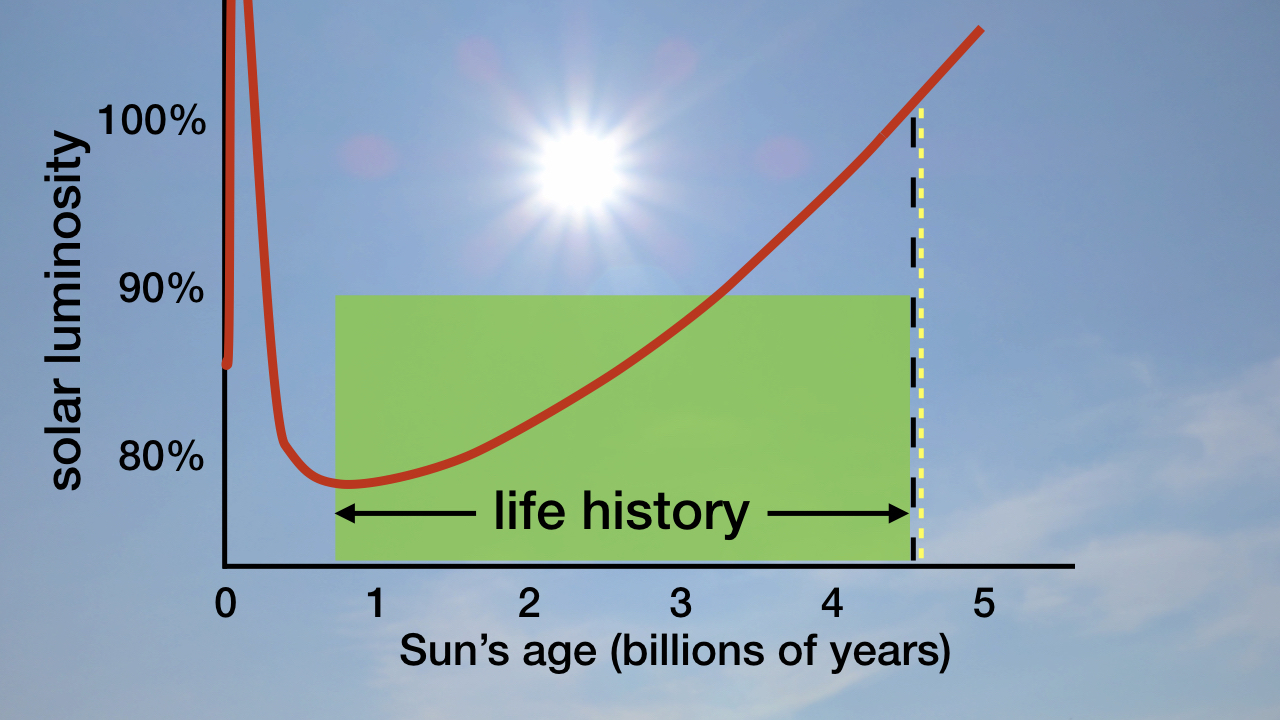 Philosophical Implications of the MGT
Gómez-Leal and her team offer no comment on the philosophical implications of their research. However, at least three jump out. One implication concerns the timing of humanity’s entry on the terrestrial scene. If the origin of humanity had occurred any earlier, humans would have lacked adequate biodeposit resources from previously existing life on Earth to launch and sustain global high-technology civilization. If the origin of humanity had occurred any later, food crop productivity would have been insufficient to sustain billions of humans and their domesticated animals. The timing of our origin, therefore, seems more purposeful than accidental.

Third, it appears that the intended purpose for the creation of human beings will be fulfilled, at least on an astronomical time scale, within a relatively brief epoch. The Cornell researchers demonstrate that the time window for global human civilization likely is briefer than 10 million years. Given this interval, the Bible reveals that the Creator intends for humanity to fulfill its destiny within this creation and, for whoever so desires, to enter into the new creation soon.7

During a ministry trip to Hong Kong several years ago I witnessed an example of smartphone addiction. Four young women were walking together down...
Design

One of the most definitive tests of the biblically predicted big bang creation model is the primordial abundance of deuterium.
Design

Skeptics often point to human wisdom teeth as an example of a useless human body part. But a new study challenges this evolutionary account.
Design