Many of you have brought to my attention the work of Jewish physicist Roger Pearlman, who claims to have shown how distant star and galaxy light can reach astronomers’ telescopes in only 5,776 years. Pearlman’s interpretation of the Torah persuades him that the universe and Earth are only 5,776 years old. Thus, like many young-universe creationists in the evangelical Christian community, Pearlman feels compelled by his interpretation of Genesis to propose a model for the universe that is radically at odds with the big bang creation model.

In two public debates I have had with leaders of young-universe creationist organizations, the leaders admitted that they knew of no scientist who was persuaded, on the basis of scientific evidence alone, that the universe and Earth were only thousands or tens of thousands of years old.1 In subsequent private conversations I have had with dozens of young-universe creationist leaders they all admitted they knew of no such scientist.

The primary reason for the total lack of any scientist who, independent of a held Bible interpretation, believes in a young universe or Earth is the existence of several intractable (or unsolvable) scientific problems for such a position. Perhaps the most intractable of all is the light-travel-time problem.

Over the past 70 years, young-universe creationists have proposed more than 10 different scenarios to resolve the light travel time problem. As I explained in chapter 15 of my book A Matter of Days, astronomers’ measurements and observations have falsified all of these proposed scenarios.2

Measurements establish that there are galaxies located several billion light-years away. A triangulation distance measurement (a direct distance measure) proves that the distances to the galaxies UGC 3789 and NGC 6264 are 162 and 470 million light-years, respectively.3 Astronomers’ measurements show that the light from galaxies emanated from the galaxies themselves and traversed from the galaxies to Earth. Astronomers’ measurements also establish that the velocity of light from stars and galaxies has the same value that it does on Earth, implying that the value of the velocity of light has remained constant throughout the entire history of stars and galaxies. Indeed, any change in light’s velocity during that time would rule out the possibility of physical life.

Young-universe creationists are aware of these measurements. Nevertheless, they refuse to admit that they are mistaken about the age of the universe. Similar to what is occurring in the recent revival of the flat-earth hypothesis, young-universe creationists now are appealing to geometric constructs that are beyond the comprehension of most laypeople in an attempt to persuade them that there really is a viable case for their hypothesis.

In proposing their scenarios for solving the light travel time problem, young-universe creationists consistently challenge doubters to falsify the theoretical basis of their scenarios. In every case, however, there is no need to wade into the theoretical weeds. If the scenario violates well-established observations and measurements, then clearly the scenario is false. In what follows I show how observations and measurements have disproven Pearlman’s scenario for a young universe.

The presumption that redshifts of the light emanating from galaxies are the sole basis for astronomers being persuaded that the universe has continually expanded throughout its history is incorrect. Astronomers’ measurements of the temperature of the cosmic background radiation, the radiation left over from the cosmic creation event, show that the farther away one measures that temperature, the warmer it is. The warming curve (see figure below) that astronomers observe has the shape and the values that only continual expansion from a cosmic creation event can explain. The warming curve can be used to calibrate galaxy redshifts. That calibration establishes that 100 percent of the galaxy redshifts astronomers observe is due to the movement of the galaxies away from us. That being the case, the light from many galaxies indeed has taken billions of years to reach our telescopes. 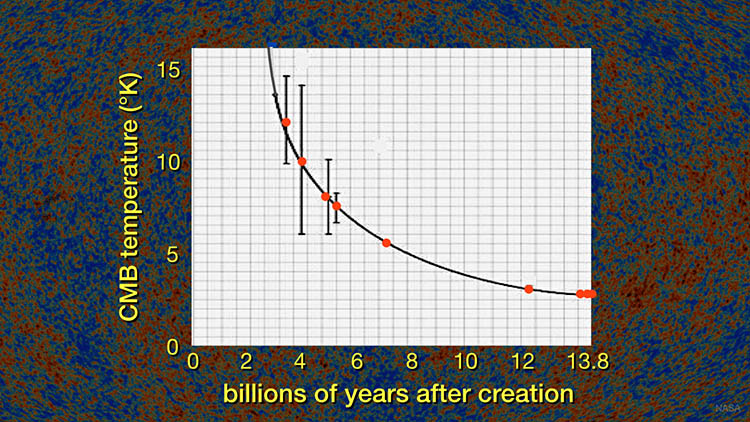 Figure: Observations of the Cooling History of the Universe

Pearlman is not the first young-universe creationist to propose that we are at the center of a roughly spherically symmetric universe. Russell Humphreys and Jonathan Sarfati have made such claims in their books for more than a decade.6 However, as I explain in A Matter of Days,7 if we are at such a center, the density of galaxies in our vicinity would be much higher than if they were at greater distances. Observations show that our galaxy resides in one of the lesser populated regions of the universe.

The Pearlman SPIRAL universe model is contradicted by many more observations and measurements. However, the three I mention here are adequate to demonstrate that the model is false.

As a Christian and student of the Bible, what I find especially ironic by young-universe creationists’ attempted scenarios to explain away the light-travel-time problem is how they seem to go against the clear teachings of the Bible. All their scenarios reject the big bang creation model, and most appeal to (at some point in the universe’s history) radically different values for the constants of physics. The Bible in repeated texts taught the four fundamental features of big bang cosmology thousands of years before any astronomer had a clue that the universe manifested such features.8 Likewise, the Bible repeatedly declares or implies that just as God is immutable so are the laws that govern the heavens and Earth.9

Why the 10 Plagues on Egypt?

Question of the week:  Why was it necessary for God to send 10 plagues on Egypt? I understand the need for discipline, but why...
Bible

It Is Not Good for Man to Be Alone

Two months ago, Kathy and I watched the reality television series Alone. The show chronicles a competition among ten wilderness experts who are isolated...
Bible