All standard planetary formation models, when applied to the solar system, are stymied by the “Mars Problem” and the “Main Belt Problem.” Most solar system formation models can explain the masses and orbits of the solar system’s four gas giant planets (Jupiter, Saturn, Uranus, and Neptune) as well as the masses and orbits of Mercury, Venus, and Earth. They predict, however, (1) that Mars should be 1.1–1.5 times more massive than Earth, (2) that the Main Belt of asteroids should be much larger in terms of total mass and should include a few bodies as massive or nearly as massive as Mars (Mars = 0.11 Earth masses), and (3) the Main Belt should extend from Jupiter’s orbit to just outside Earth’s orbit.

In my book Improbable Planet,1 I wrote about how for over a decade a team of astronomers known as the Nice team led by Alessandro Morbidelli of the Observatoire de la Côte d’Azur in Nice, France toiled to solve the Mars Problem. The team’s efforts culminated in the grand tack model.

This model proposed that the solar system originally had five gas giant planets: Jupiter, Saturn, Uranus, Neptune, and another Neptune-sized planet where Jupiter ejects the Neptune-sized planet into interstellar space or into the outer reaches of the solar system as a result of Jupiter, Saturn, Uranus, and Neptune tacking by varying degrees.2 The Nice team used the sailing term “tacking” to refer to the change in migration of the solar system’s gas giant planets, first inward toward the Sun and then outward.

The Nice team showed that if a planetary system’s most massive gas giant forms closest to its host star and the second most massive gas giant planet forms the second closest to its host star, it is possible for that planetary system’s gas giant planets to experience an inward migration followed by a more significant outward migration. However, it takes exquisite fine-tuning of the individual masses and orbits of the gas giant planets and of the primordial asteroid and comet belts to explain the present masses and orbits of Mercury, Venus, Earth, Mars, and the Main Belt.

The reversal in migration direction of the gas giant planets occurs because Saturn migrated inward at a faster velocity than Jupiter. The different migration velocities resulted in Jupiter and Saturn becoming temporarily locked into a 3:2 mean motion resonance. This resonance was where Jupiter was making exactly three orbits about the Sun for every two orbits of Saturn. This resonance meant that the gravitational tugs of Jupiter and Saturn frequently lined up to disturb the orbits of the other gas giant planets and the primordial asteroid and comet belts.

The resonance caused one of the smaller gas giant planets to be forcefully ejected. It also caused all the gas giant planets to change their migration direction, and it reduced the size of the Main Belt down to just 0.1% of its primordial size. It impacted the formation of the inner rocky planets.

What is new since the writing of my book Improbable Planet is that the Nice Team solved a remaining minor problem. The model had explained how the Main Belt became so small, how the inner (and most dangerous to life on Earth) part of the Main Belt was eradicated, how the remaining asteroids became radially mixed, and how the inclinations of the orbits of Main Belt evolved to such extreme and chaotic values. But it did not explain how the orbits of Main Belt likewise evolved to such extreme and chaotic eccentricities.

In a paper published in Icarus the Nice Team extended their model forward from the giant planet orbital instability for an additional 4.1 billion years.3 This extension not only fully explained the eccentricities in the orbits of the Main Belt asteroids, it also explained the distribution of the values of the semi-major axes (semi-major axis is half the diameter of an orbiting body’s orbit at its widest point) of the Main Belt asteroids’ orbits.

In a separate study, another team of astronomers reanalyzed the grand tack model wherein they fully took into account the effects of viscous heating of the pre-planetary protosolar disk.4 They also employed a more realistic mass-radius relationship for the growing terrestrial planets (Mercury, Venus, Earth, and Mars). Their reanalysis accurately reproduced both the orbits and the mass of Mercury, Venus, Earth, and Mars. However, to get Earth orbiting the Sun at its current distance, this team needed to move the distance from the Sun where Jupiter reverses its migration direction from the 1.5 AU (1 AU = Earth’s present orbital distance from the Sun) determined by the Nice team out to 2.0 AU (see figure). 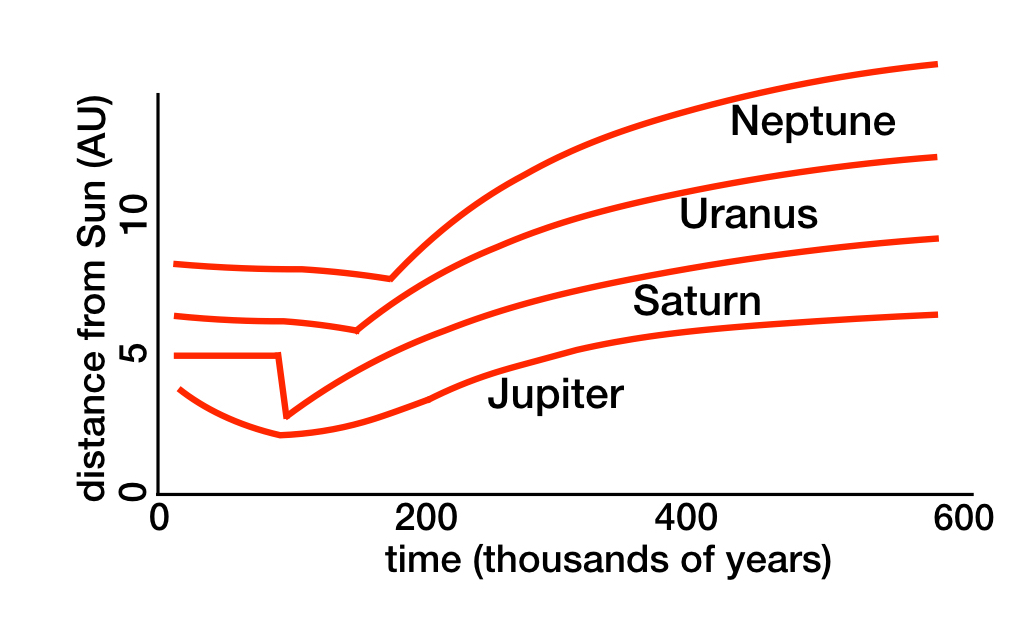 Figure: The updated grand tack showing first the inward then the outward migration of the solar system’s present gas giant planets.
1 astronomical unit (AU) = distance from Earth to the Sun.

As I have explained in previous blog posts and in my book Improbable Planet, the grand tack model requires a huge amount of solar system fine-tuning. However, it now explains all the orbital and mass distribution characteristics of the Sun’s planets and asteroid and comet belts. Furthermore, it explains these characteristics in minute detail.

The fine-tuning design inherent in the grand tack model is consistent with the observation that no other planetary system in the catalog of 2,705 extrasolar planetary systems comes anywhere close to mimicking the characteristics of our solar system. The research of the two teams mentioned here provides yet more evidence for the solar system’s extraordinary fine-tuning design that makes advanced life and civilization possible on Earth.

An astronomer at the University of Chicago has developed a new, more precise method for dating the cosmic creation event. This radiometric method also...
Astronomy

Yet More Reasons to Thank God for the Moon

The more astronomers and physicists research the Moon, the more they discover how marvelously designed the Moon is, and how it makes the ability...
Design

A team of American and German radio astronomers has discovered several masers (Microwave Amplification by Stimulated Emission of Radiation) in galaxies with implications for...
Astronomy