On December 29, 2016, I posted a blog article where I dispelled the widespread web speculations that fast radio bursts were signals being sent out by intelligent aliens. This web buzz arose from a paper published by a team of astronomers in which they announced the discovery of six additional fast radio bursts from the only known repeating fast radio burst (FRB) source, FRB 121102.1

For those of you who have not yet read the article, FRBs are transient powerful radio pulses that last just a few milliseconds. In my blog article I described the evidence that unequivocally established that the source for FRB 121102 must be far outside our galaxy. However, though the team that discovered the six additional FRBs had determined the position of FRB 121102 with greater precision and reliability than any other team had done before, they still were not able to identify the source of FRB 121102’s FRBs.

As I mentioned in my blog article, for astronomers to determine the source of FRB 121102 they will need to identify its host galaxy. For that to be possible, astronomers will need to detect a FRB from FRB 121102 at multiple wavelengths using multiple telescopes that include high-resolution radio interferometers.

In the January 5, 2017 issue of Nature, a team of 25 astronomers reported the detection of nine FRBs from FRB 121102 using the Very Large Array (VLA) radio astronomy interferometer.2 These VLA detections enabled the team to determine the position of FRB 121102 to a precision of ±100 milliseconds. 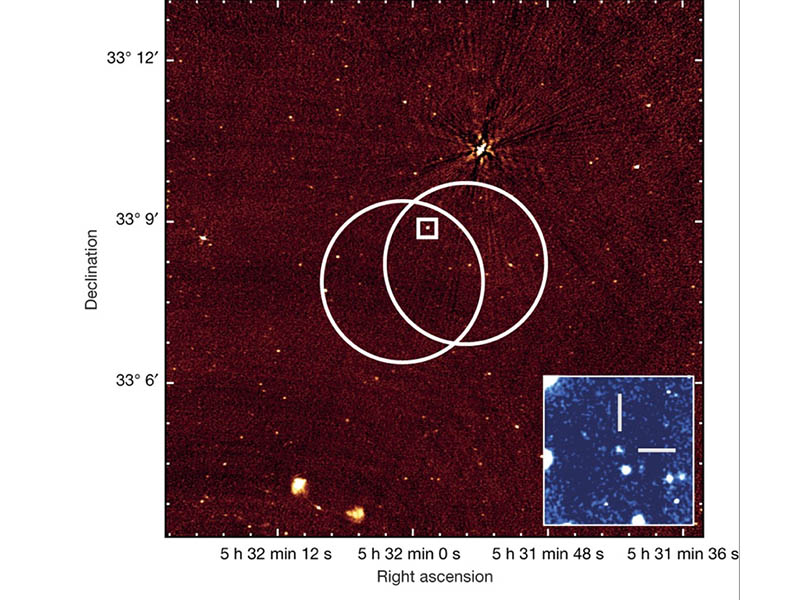 Follow-up observations of the persistent radio source counterpart of FRB 121102 by the European Very Long Baseline Interferometer Network (an array of seven radio telescopes stretching from Sweden to Puerto Rico) and the National Radio Astronomy Observatory Very Long Baseline Array (an array of ten radio telescopes stretching from Hawaii to the Virgin Islands) revealed that the angular size of the persistent radio source counterpart was less than 1.7 milliseconds. When combined with the dispersion measure values for the FRBs (see my December 29, 2016 blog article for details), this angular size translates into a diameter for the persistent radio source of less than 25 light-years.

The team concluded that one of these three possibilities must be correct. From the limited data they had, however, they could not favor one possibility over the others. A more specific identification of the source of FRB 121102, they wrote, awaits the detection of FRBs from FRB 121102 by one or both of the European Very Long Baseline Interferometer Network and the National Radio Astronomy Observatory Very Long Baseline Array.

Thanks to the spectacular observational achievements reported in the December 20, 2016 issue of the Astrophysical Journal and in the January 5, 2017 issue of Nature, FRBs are no longer the mystery they previously were. They are not signals being beamed out by intelligent aliens. They are not evidence of radical new laws of physics threatening to overturn the big bang and particle physics creation models. All is well with the cosmos. All is well with the cosmic evidences that testify of the Creator God of the Bible.

A team of European and American conservation biologists has developed the most powerful and comprehensive field evidence to date for a major tenet of...
Evolution

Opponents of the big bang creation model, both atheists and young-earth creationists, often attempt to blow past it by picking apart the least understood...
Astronomy

Over the past month, three different topics important to the science-faith discussion have appeared in scientific literature. Discoveries in each of these areas showcase...
Geology & Earth