Getting heat to cold places, especially during winter, ranks as a great human concern and source of comfort. And though we may not ever think about Earth’s giant interior furnace, humans exist due to the benefits of its fine-tuned flow.

Recent research shows that Earth is likely to be the universe’s heat flow champion for rocky planets of its size and age. In spite of Earth’s small size and age (4.6 billion years), the flow of heat from the interior to the surface is 42,000,000,000,000 watts.1 Approximately 70,000 measurements show that, on average, every square meter of Earth’s continental surface is warmed by 92 milliwatts as a result of heat flow from Earth’s interior. Meanwhile every square meter of ocean surface is warmed by 67 milliwatts.2 (Heat flows more readily through continental silicates than it does through oceanic basalts.)

Sources of Interior Heat Flow
There are two major sources of heat flow from Earth’s interior. Heat produced through the radioactive decay of long-half-life radioisotopes in Earth’s interior (radiogenic heat) accounts for about 58 percent of the present total heat flow.4 Primordial heat—that is, heat lost as Earth continues to cool from the heat generated by the accretion processes that formed it—accounts for the remaining internal heat flow.

Earth has a remarkably high level of primordial heat because of its unique formation process. Like all rocky planets, it formed through the accretion of planetesimals, dust, and gas. The gravitational collapse that occurred through this accretion generated a lot of internal heat. However, Earth’s accretion history did not end there.

Earth experienced three other major accretion events. The most significant of these was the merger event that led to the formation of the Moon a little less than 100 million years after Earth’s initial formation. Earth and Theia (a planet 15–45 percent of Earth’s original mass) merged, increasing Earth’s mass, producing the Moon, and substantially augmenting Earth’s heat of accretion.5 Shortly after the Moon-forming event Earth received a “late veneer”—a bombardment by large asteroids and comets.6 Then, about 3.9 billion years ago, Earth received the Late Heavy Bombardment of large asteroids and comets.7 Consequently, Earth’s primordial heat from accretion was boosted far beyond what is typical for other rocky planets of its size.

It is not only the amounts of potassium, uranium, and thorium that matter for potential life on a planet but also where within a planet these elements reside. On Mars, measurements show that the weight of the polar ice cap has not depressed (pushed down) the underlying lithosphere (crust). The observed upper limit on this depression shows that the present-day mantle heat flow must be less than 7 milliwatts per square meter.11 This implies that most of Mars’ potassium, uranium, and thorium resides in its crust and that its mantle is depleted of these elements. Such a lack explains why the planet’s magnetic field, tectonic activity, and volcanism shut down about 4 billion years ago. Meanwhile these features have been sustained on Earth.

Interior Heat Flow Pathways
In 1862, Britain’s famous physicist Sir William Thomson, Baron Kelvin, calculated that Earth could not be older than 98 million years.12 His calculation was based on estimates of Earth’s internal heat flow at the time. It assumed all of Earth’s internal heat flow came from the residual heat from a single accretion event (the condensation of Earth from planetesimals) and that heat flow from Earth’s interior occurred strictly as a result of conductive cooling. As already noted, his first assumption was incorrect. His second assumption was also incorrect. 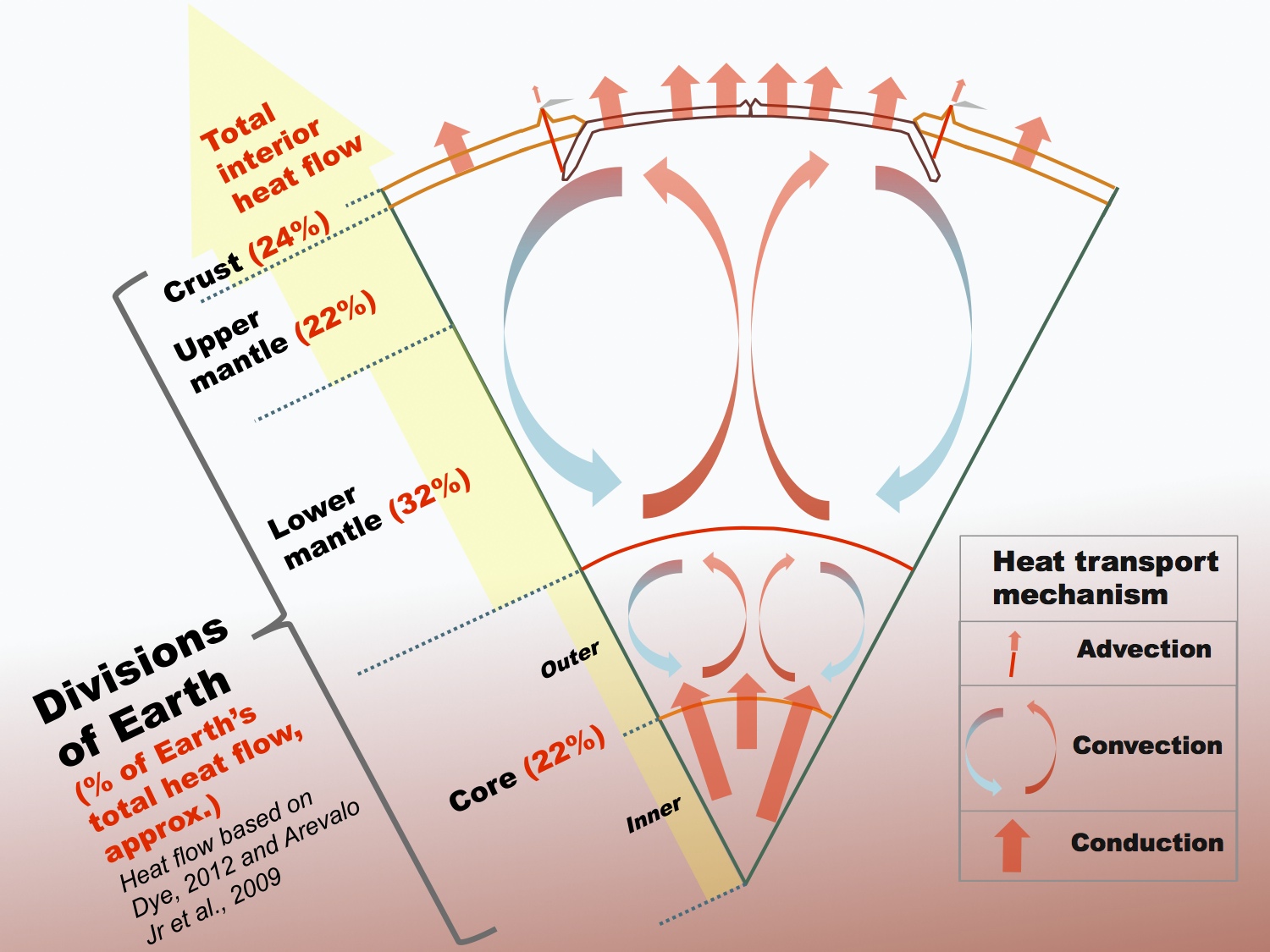 History of Earth’s Interior Heat Flow
Interior heat flow from both primordial (accretional) heat and radiogenic heat changes over time. The heat left over from accretion gradually dissipates as it flows from Earth’s deep interior through the mantle, through the crust, and to the surface and beyond.

When Earth was younger than about 100 million years, its radiogenic heat was dominated by short-half-life radioisotopes, such as aluminum-26, cesium-135, hafnium-182, iron-60, neptunium-237, technetium-97, and plutonium-244. For the past 4 billion years just four radioisotopes–potassium-40, thorium-232, uranium-235, and uranium-238–have accounted for more than 99 percent of Earth’s radiogenic heat. Figure 2 shows the relative contributions of potassium-40, thorium-232, uranium-235, and uranium-238 to Earth’s internal heat flow throughout the past 4.5 billion years.14

Benefits of Earth’s Interior Heat Flow
The present temperature of the mantle just under Earth’s oceanic crust is 1,410°C.15 The current high temperature of the upper mantle means that the upper mantle material has a low viscosity (flows more easily). A familiar analogy would be the difference between a cold stick of butter and a stick of butter that has been melted in a saucepan.

It is thanks to the mantle’s low viscosity that tectonic plates in Earth’s crust are able to move relative to another—a feature of Earth for the past 3.8 billion years. This tectonic activity transformed Earth from a waterworld, where only water existed on its surface, to a planet possessing both surface oceans and surface continents. The combination of surface oceans and continents and enduring, strong tectonic activity established the biogeochemical cycles that allowed Earth’s surface temperature to be sustained at an optimal level for life in spite of the ongoing brightening of the Sun.16 The same combination has been recycling many of Earth’s life-essential nutrients. Without Earth’s enduring, strong interior heat flow, at best, only microbial life could have existed on Earth and for only several million years. In that event, microbial life never would have been able to physically and chemically transform Earth’s surface environment so that plants, animals, and humans could exist.

The current cooling rate of Earth’s mantle is 70–130°C per billion years.17 This cooling is slow enough to pose no short-term threat to any current life-forms. The cooling does imply, however, that Earth’s mantle will become more viscous. Eventually, it will be so viscous that plate tectonic activity will shut down. When that happens, advanced life and, eventually, all life will go extinct.

It is thanks to Earth’s unique strong, enduring interior heat flow that it has both a solid inner core and a liquid outer core. Earth’s liquid core is almost entirely comprised of the ferrous elements iron, cobalt, and nickel. These easily magnetized elements driven by convection currents in the outer core explain why Earth has sustained a powerful magnetic field throughout at least the past 3.7 billion years.18

If it were not for Earth’s astoundingly powerful and enduring internal heat flow from the furnace in its core, there would be no civilization. In fact, there would be no humans on Earth. Nor would there be animals, trees, large plants, oceans, or atmosphere. It is thanks to the amazingly fine-tuned designs of Earth’s formation and of its interior structure and heat flow that billions of humans can thrive on Earth, enjoy high-technology civilization, gain an enormous amount of knowledge and understanding and use them to fulfill the purpose and gain the destiny for which our Creator made us.

A Couple of Tasty Morsels

A sampling of new research uncovers more function for junk DNA, undermines one of the best arguments for biological evolution
Design

Do Animals Experience Sin and Guilt?

Some people believe that humans are simply highly evolved animals and, thus, possess no features that are not manifested–at least to a small degree–in...
Design

Unmasking Misconceptions: Book reviews of The Hidden Face of God and Darwin’s God

An underlying wisdom and unity pervade the universe, life, and the human mind. Scientists exposed this discovery in their quest to uncover the ultimate...
Design