Who thinks about vast galaxies and how their movements might affect humanity? Probably not many of us, but astronomers study galaxy movements in order to learn as much as they can about the universe. Some of their recent discoveries have helped answer questions while revealing design. 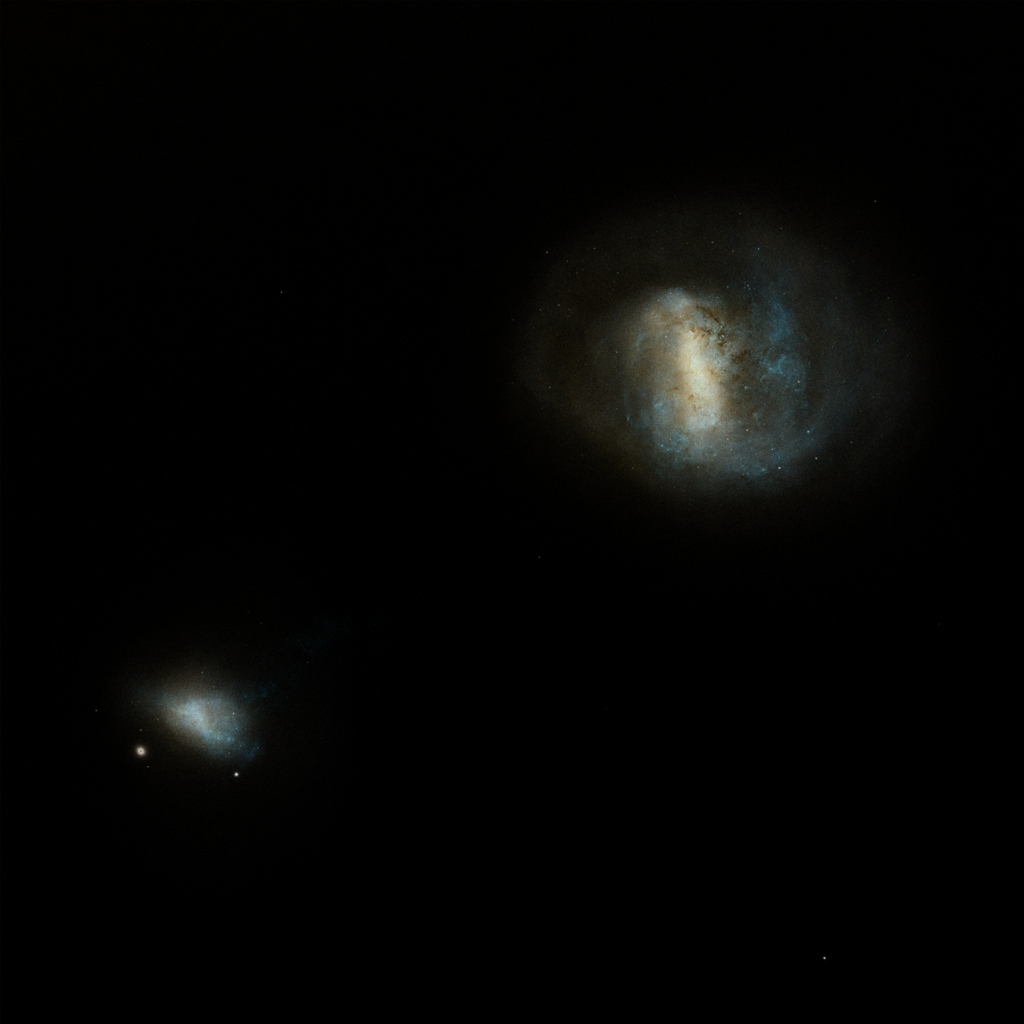 In previous articles1 I describe how the design of the Magellanic Clouds allows them to funnel just-right streams of gas, dust, and small dwarf galaxies into the MWG’s core. It is thanks to these just-right streams that the MWG’s spiral arms possess the structure, symmetry, and stability needed for advanced life.

Astronomical observations show that the LMC is speeding toward the MWG at a velocity of about 20 kilometers per second (45,000 miles per hour).4 Therefore, it is only a matter of time before that part of the MWG where the solar system resides becomes gravitationally destabilized.

These calculations raise questions pertinent to human civilization and to philosophy. First, to what degree has life on Earth been impacted by the approach of the LMC? Second, how soon will the LMC’s approach bring an end to human life? Third, thinking philosophically, to what degree do the characteristic features of the Magellanic Clouds provide evidence that they have been designed for the specific benefit of humanity?

Galactic Halo Map
In an endeavor to answer the first two questions, a team of seven astronomers, led by Charlie Conroy at Harvard University’s Center for Astrophysics, analyzed recent high-precision measurements of the distances, positions, and velocities of 1,301 stars at distances from the MWG’s center ranging from 60 to 100 kiloparsecs (196,000 to 326,000 light-years).5 This sample did not include any stars associated with the LMC, the SMC, the Sagittarius Stream, or MWG disk stars.

Several other research teams had previously performed computer simulations of the gravitational interactions between the LMC and the MWG’s stellar and dark matter halo.6 Conroy and his colleagues added four more computer simulations for a range of LMC masses. These simulations predicted that a local wake of matter would trail the orbit of the LMC around the MWG. They also predicted the existence of a large-scale overdensity across a large part of the northern galactic hemisphere (celestial sky north of the MWG’s disk). However, astronomers had been stymied in their efforts to definitively detect either the predicted wake or the overdensity.

Conroy’s team’s analysis of the 1,301 stars clearly revealed a wake trailing behind the LMC. They also detected the predicted northern overdensity. The wake was strong enough to eliminate the possibility that the LMC and SMC were on their second orbit around the MWG. If the LMC and SMC had undergone more than one complete orbit, then the wake would be much weaker, likely not even detectable.

Galactic Halo Map Implications
Conroy’s team noted a striking agreement between the observations and computer simulations. They also showed that more precise measurements of the location of the wake trailing the LMC will provide stronger constraints on the masses of the MWG and LMC and on the LMC’s orbit.

The collision is not imminent. It will take another 2.5 billion years for the LMC and SMC to merge with the MWG. The merger will increase the mass of the MWG’s central supermassive black hole from its present minuscule 4 million solar masses7 to as much as 32 million solar masses8 and shower the entirety of the MWG with deadly radiation. The merger also will eject an enormous number of the MWG’s disk stars to the MWG’s halo. It is unlikely that the solar system’s orbit about the MWG’s core will remain undisturbed.

Obviously, the future does not bode well for advanced life in the solar system. However, neither did the past. It is the present that is an amazing marvel.

In part 1 of this series, I discussed how scientific evidence demonstrates that the universe had a beginning and that such a notion best...
Evolution

Universe Cannot Be Created Because That Would Be Magic?

Naturalists, atheists, and skeptics are taking a not-so-new approach to dismissing the scientific evidence for God. Recently, they have been asserting that any claim...
Theology