Most of us have only scant memories of our early childhood. While I can recall many details from when I was four years old, I have only a few memories from my third year, such as the layout and furnishings of the small apartment that my parents, my two sisters, and I lived in not far from McGill University in Montreal. I also remember a couple of walks in Montreal with my parents. As for my second year, I have only one intact memory—that of seeing the outside and inside of a wooden station wagon belonging to the hydraulics engineering company my father founded. I wish I had more detailed and extensive memories, but I do not.

Scientists face the same dilemma about Earth’s infancy. They possess a few fuzzy snapshots of the conditions existing on the early Earth, but they desire a much more comprehensive and detailed picture. Thanks to a new discovery,1 their desire is beginning to be fulfilled, and that fulfillment reveals more evidence for the fine-tuning of the early Earth in preparation for human beings and human civilization.

It is now established that life existed on Earth’s surface as far back as 3.825 billion years ago.2 However, it is also well established that the Sun at that time was 18–23 percent dimmer than it is now.3 Life can tolerate only about a 1–2 percent change in solar luminosity. For life to have survived on the surface of the early Earth, there must have been a much greater quantity of greenhouse gases in the atmosphere.

Scientists look to fossil and isotope evidence, which indicates what kinds and abundances of life were present on the early Earth, for clues. Based on that evidence they have deduced roughly what quantities of the greenhouse gases—carbon dioxide, methane, and water vapor—and what quantity of the greenhouse gas enhancer, nitrogen, likely existed at different times in early Earth’s atmosphere. What these scientists lacked, though, were direct measurements of the atmospheric abundances of these gases. A recently published report now addresses this lack.

Ancient Micrometeorites
Estimates for the atmospheric carbon dioxide levels from 3.8–2.5 billion years ago were based on paleosols (soils preserved by burial underneath sediments or volcanic deposits) and other proxies. These estimates ranged from about 0.003 to 0.75 bar of carbon dioxide. (1 bar = 100,000 pascals.4 Present mean atmospheric pressure on Earth at sea level = 1.01325 bar).

The carbon dioxide level in Earth’s atmosphere is not the only uncertainty that had puzzled scientists about conditions on the early Earth. There also exists a temperature uncertainty.

Isotopes of phosphates5 and deuterium6 suggest that Earth’s surface temperature during the Archean Eon (3.8–2.5 billion years ago) was less than 40°C. However, isotopes of oxygen in Archean cherts7 indicate that Earth’s surface temperature was about 70°C. Meanwhile, the presence of Archean glacial deposits8 shows that, at least on brief occasions during the Archean Eon, parts of Earth were less than 0°C.

These uncertainties motivated an interdisciplinary team of five scientists at the University of Washington (UW) to search for a more reliable and accurate proxy for Archean atmospheric carbon dioxide levels and for Archean surface temperatures. The proxy they chose was to determine the degree of oxidation in Archean micrometeorites caused by exposure to atmospheric carbon dioxide.

Iron-nickel metallic micrometeoroids, when they enter Earth’s atmosphere at high velocities, will briefly melt.9 While molten, the oxygen or carbon dioxide in the atmosphere can oxidize some or all of the iron metal. Before reaching Earth’s lower atmosphere, the molten micrometeoroids solidify. The solidified micrometeorites remain inert and thus preserve their oxidation state at the time they entered Earth throughout geologic time.10

Determination of Atmospheric CO2 Levels
There is no doubt that molecular oxygen (O2) is a much more efficient oxidizer of iron than is carbon dioxide (CO2). However, measurements establish that molecular oxygen remained at an extremely low abundance level in Earth’s atmosphere throughout the Archean Eon, only about 1 part per million by volume.11 Analysis of the acid weathering of Archean soils that became paleosols12 and Archean carbon cycle models13 show that the Archean atmosphere was very rich in carbon dioxide. Consequently, the five UW scientists concluded that the oxidation of Archean micrometeorites was entirely due to their exposure to carbon dioxide in Earth’s upper atmosphere.

The figure below shows the luminosity history of the Sun. In my book Improbable Planet, I devoted an entire chapter to the Sun’s past dimmer history—what is known as the faint Sun paradox.18 There, I described six major factors that in combination compensated for the dimmer Sun so that life could thrive during the Archean Eon:

I also described several other factors that played minor roles in compensating for the dimmer Sun. 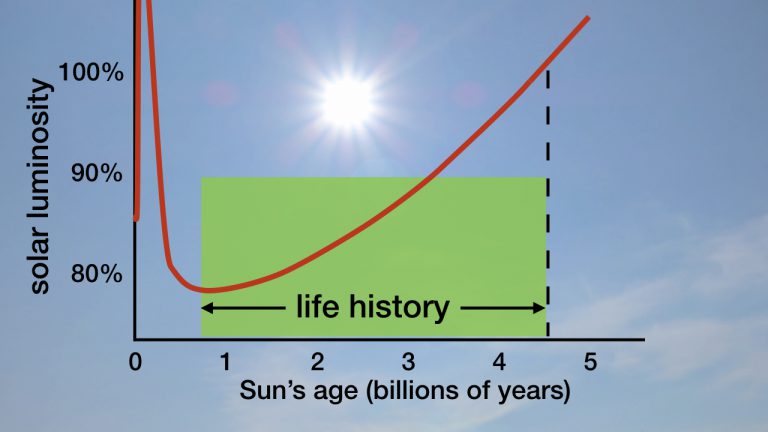 The research team’s measurements and analysis show that a very high abundance level of carbon dioxide in Earth’s Archean atmosphere played the most significant role in compensating for the dimmer Sun. So much so that scientists no longer need to look for additional missing pieces to explain how life could thrive on Earth with the Sun being about 20 percent dimmer than it is now. The faint Sun paradox is resolved.

The paradox has become resolvable by what we know and understand about the conditions on Earth during the Archean Eon. But it does not mean there is nothing more to learn about Earth’s design features that have made possible abundant, diverse life throughout the past 3.8 billion years—features that also opened up a brief window of time in which humans can live and thrive.

Measuring the fractional area of unoxidized iron in these iron-rich micrometeorites will tell us the quantity of carbon dioxide in Earth’s atmosphere at the measured dates of the different micrometeorites (with the exception of the brief episode known as the Great Oxygenation Event that took place 2.45–2.20 billion years ago). The possession of accurate measures of the atmospheric carbon dioxide levels from 3.80–2.45 and 2.20–0.58 billion years ago will yield a much more detailed and extensive picture of all the amazing fine-tuned designs that perfectly compensated for the Sun’s ongoing brightening so that abundant, diverse life could exist on Earth throughout the past 3.8 billion years.

Lately, my wife has had trouble hanging onto cell phones. Within the span of two weeks she lost not one cell phone, but two.
Evolution

Q&A: Why Would a Limitless Creator Face Trade-Offs in Biochemical Designs?

In my experience, no one denies the complexity and sophistication of biochemical systems, regardless of their philosophical or religious views. To put it another...
Biochemistry

Analysis of Genomes Converges on the Case for a Creator

Are you a Marvel or a DC fan? Do you like the Marvel superheroes better than those who occupy the DC universe? Or is...
Evolution